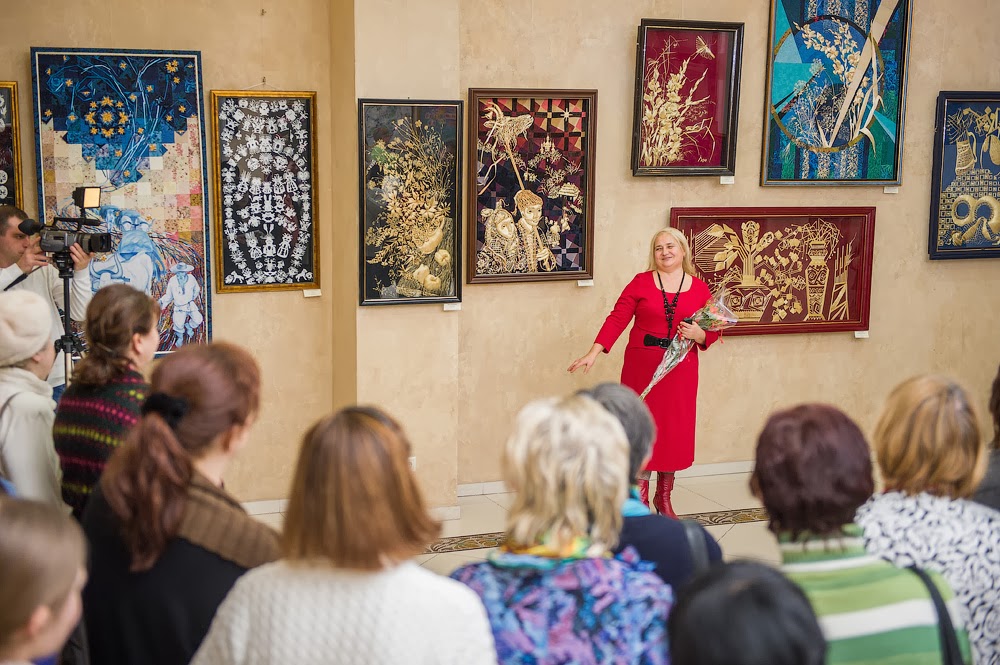 Straw embroidery is an almost unheard medium today.  Artist  Natalia Lashko utilizes straw like no one else we are aware of.   We thought the above image was important as it gives an idea of the size of her works.

Natalia (or Natalya) Lashko comes from the old Russian city of Voronezh. She grew up in the family of an artist – her father was a painter and decorator. The first art education Natalia received was at the Penza Art College in Russia. She had a great desire to continue art studies in Moscow or Leningrad, but fate decided differently. Natalia entered the Kharkov Art and Industry Institute, where she met her future husband – Vladimir Lashko,  an honored sculptor of Ukraine.  After graduation in 1984 the couple left for Kamenetz – Podolsk, Ukraine.  In Kamenetz-Podolsk State Historical Museum Natalia started her career in arts and crafts. In 1995, she began her teaching career. It was a school of aesthetic education, and after receiving a master’s degree in 2004, she became and still is a teacher at Kamenetz – Podolsky National University, in the Department of Fine and Decorative Arts and is also a Member of the National Union of Folk Art of Ukraine.

Straw was used in Russia since the 16th century (according to some sources – even much earlier) as an imitation of gold embroidery.  Natalia was aware the actual process had been lost over time.  Through much experimentation, trial and error, Natalia began a journey of discovery, including her love of quilting (as evidenced by the fabric selections she draws together in her work).  To further her knowledge and skills she travels the world, visiting exhibitions, holding courses and master classes with leading foreign masters of patchwork, a word she uses to describe her pieces. 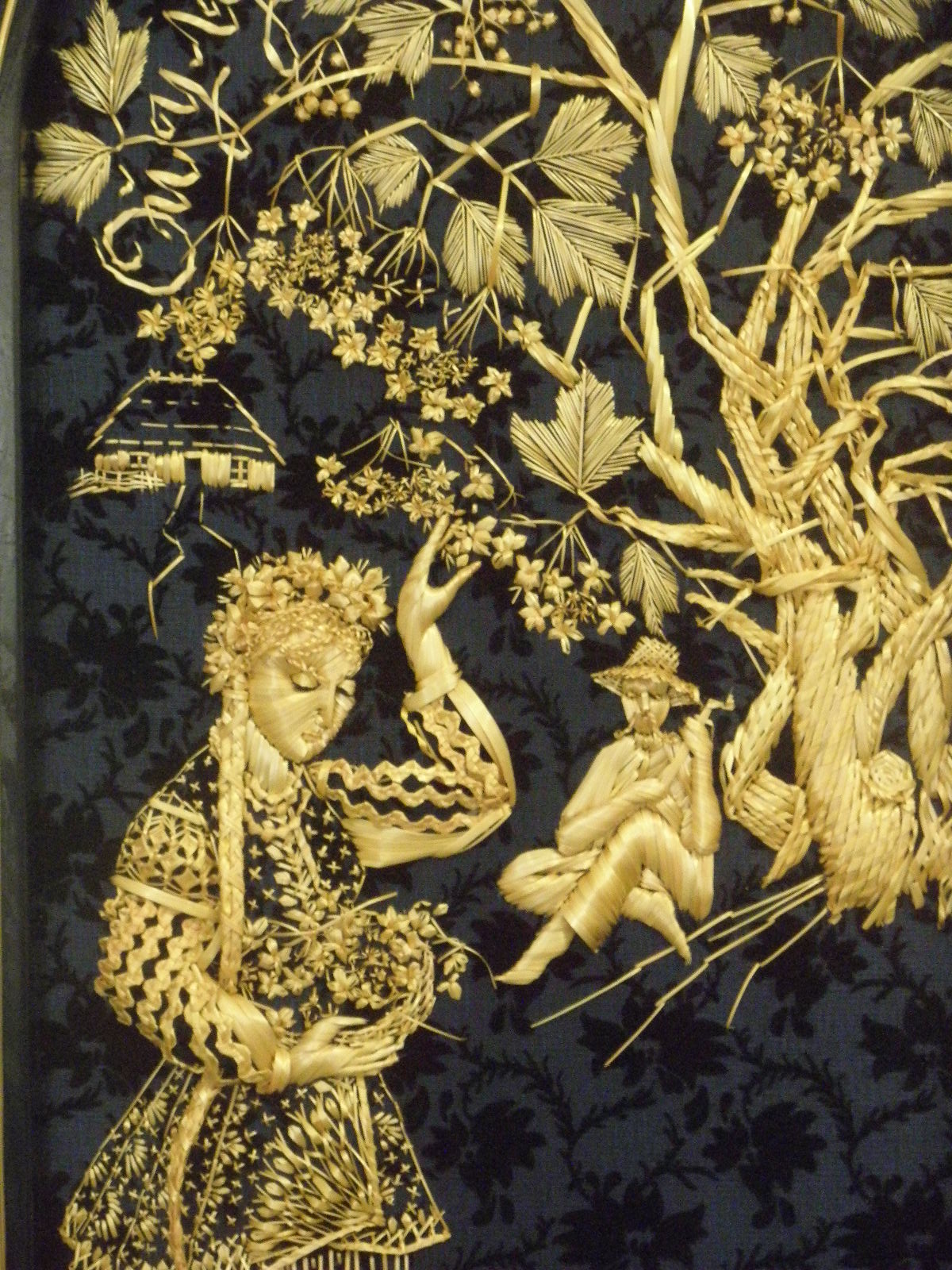 Natalia has developed her own style of straw embroidery;  one that creates dimension by not necessarily sewing each piece of straw as it might if it were thread stitched. As a result Natalia has taken straw embroidery into the current century.  The straw works of Natalia look both traditional and original and alive. 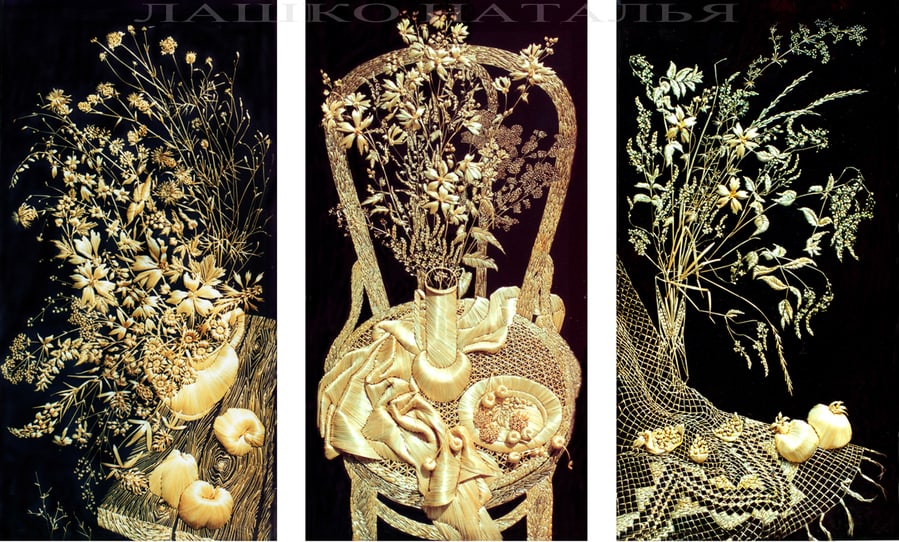 Her masterpieces of straw that may take as long as five years to complete.  Her works, some being 5 feet in length, may be found in private collections in Israel, France, Russia and Poland. 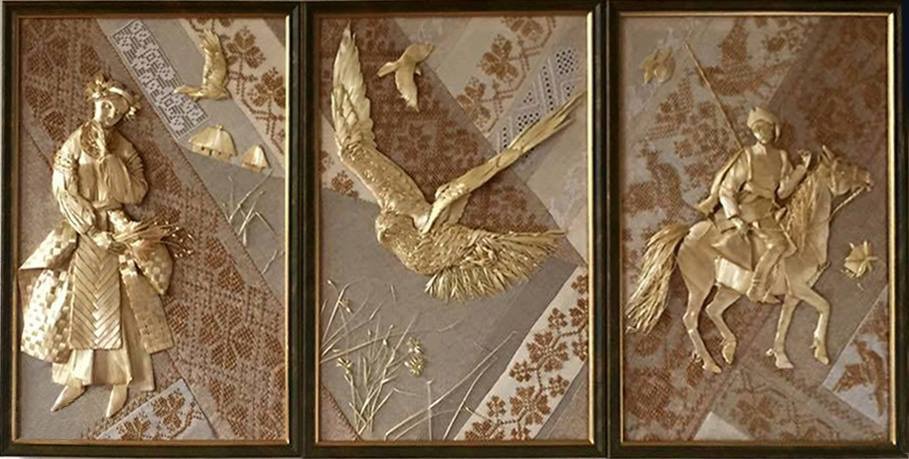 We share images of her work, some in full view and some in sections so viewers may better see the detail.

The Straw Shop is privileged to be the only American website granted permission to share her works.

Scroll through the below gallery for more of her  straw embroidery expressions: 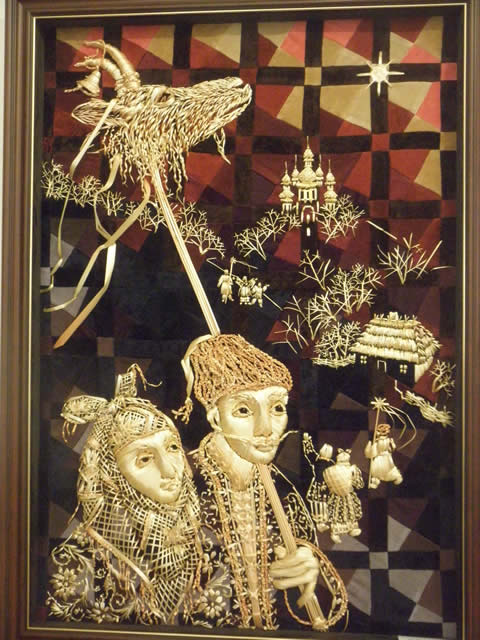 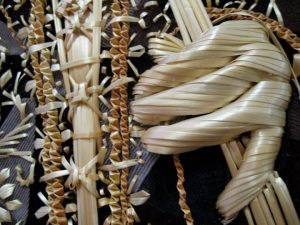 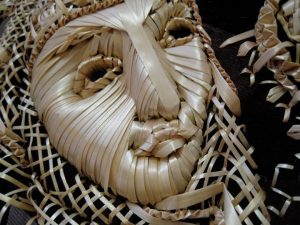 Natalia also taught her son, Illyaz, who like his mother, excels in this medium.  Below are detail portions of their combined work: 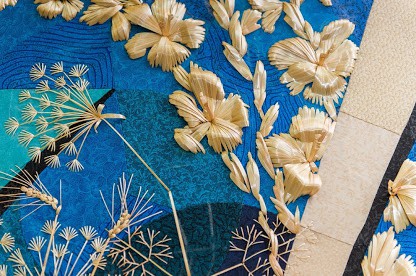 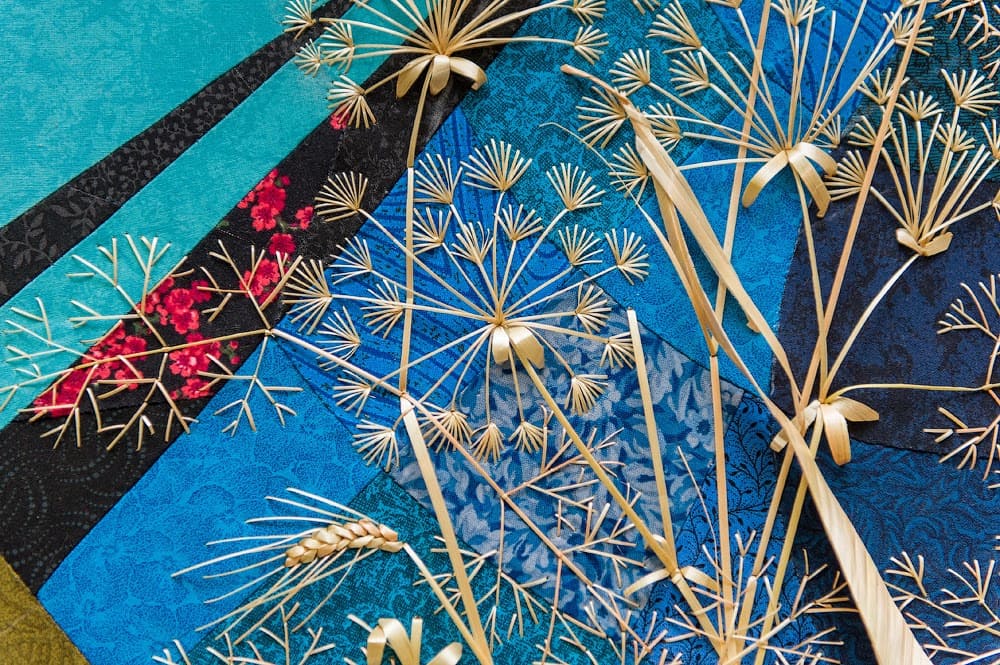 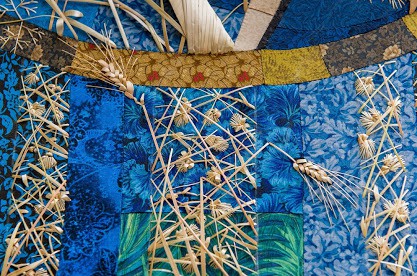 Putting together the three above images, below is the complete image of their combined work : 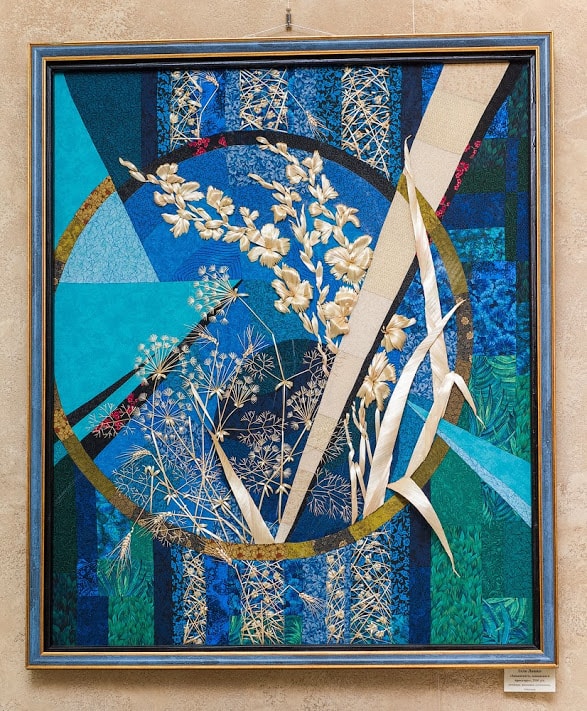 According to Natalia, “Straw is a flexible material. Working with it is difficult and at the same time enjoyable. ”

Below are more examples of her extraordinary talent.  The dimensionality she achieves is like no other. 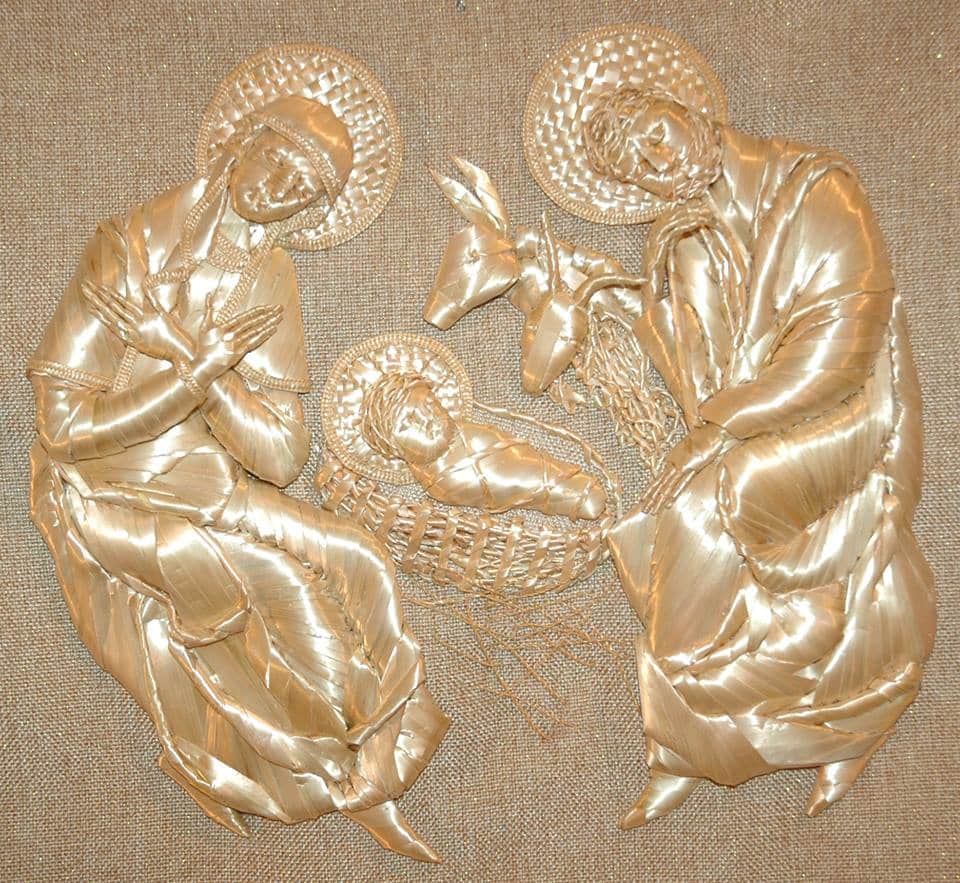 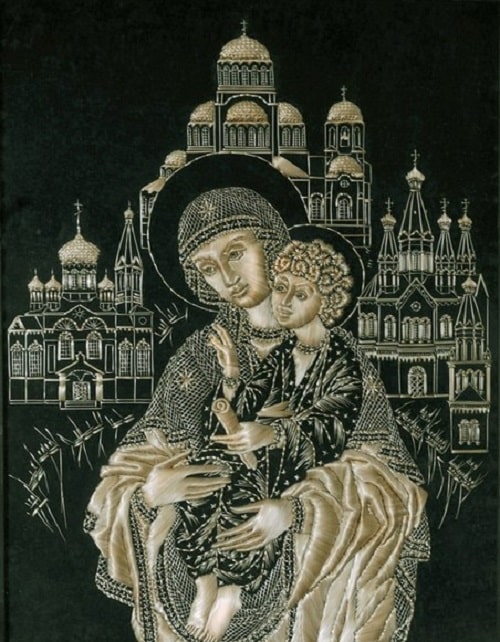 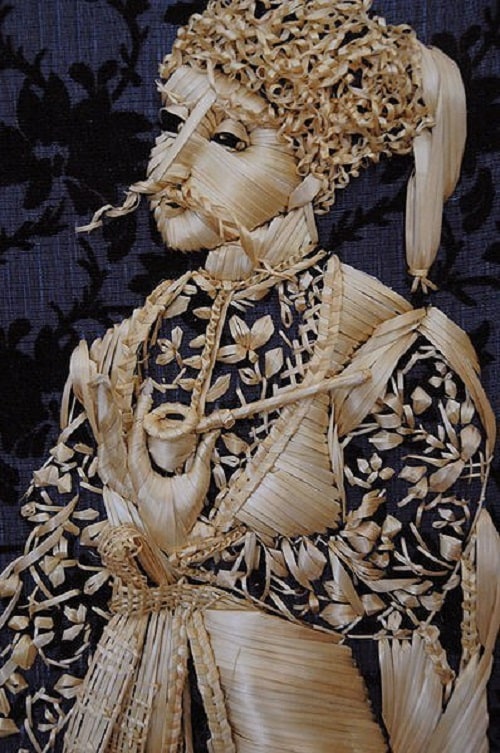 Detail of a man by Natalia Lashko

In 2013  she constructed a robe featuring her amazing embroidered straw sculptures.   Beginning with the back of the robe she added the holy family figures, she the continued into  2014  to design the front of the robe depicting those who sought the Christ child.  Through research and discussions it was determined the straw pieces  each actor  would be embroidered on a single tissue and then sewn on the robe so you can remove the optional shapes, wash and sew vestments again. 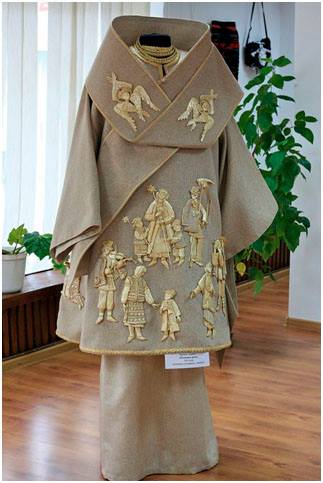 There was difficulty with portraits, because they have to be graceful and beautiful. I had a lot of experimenting. Imagine the face of  Jesus just two millimeters and centimeters, in which I   must depict the eyes, nose, lips, and that it was a child, with plump cheeks that he was beautiful. From all that I have embroidered, and this many characters, Jesus was for me a pleasure.

Here is a detail  of shepherds and the Magi -rozhdestvenskie characters. 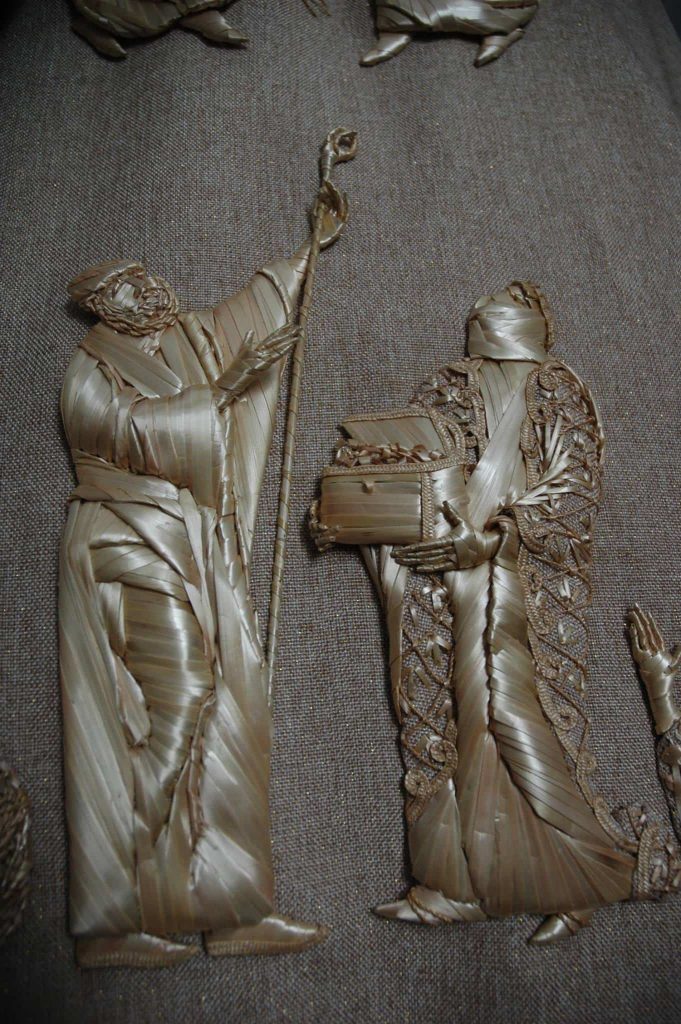 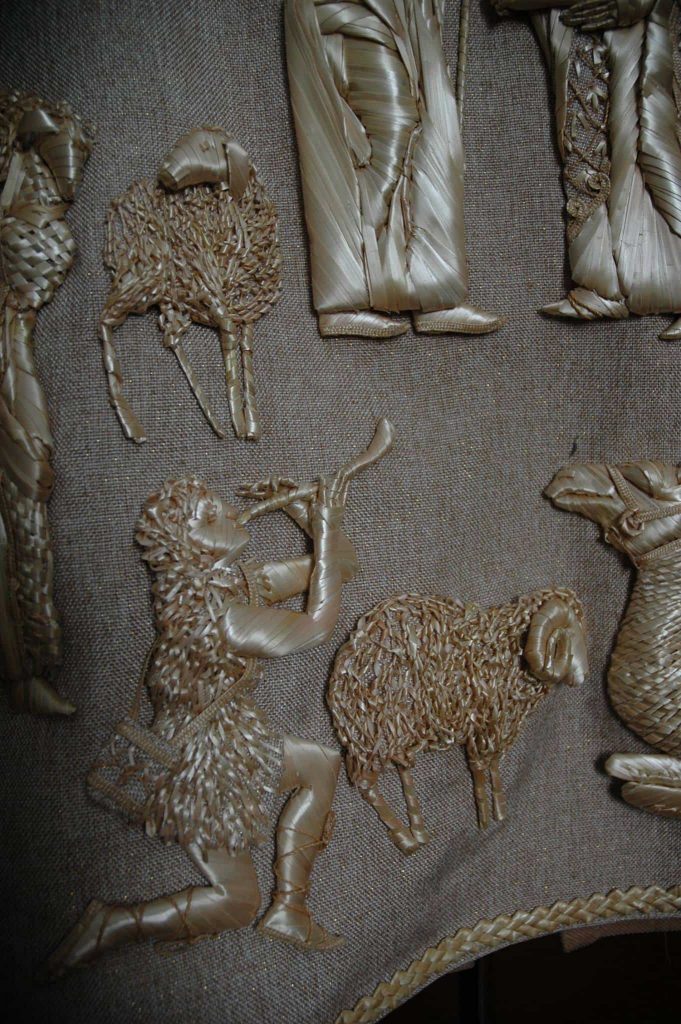 The various textures Natalia achieves as well as her use of light reflection make her sculptural pieces just come alive. 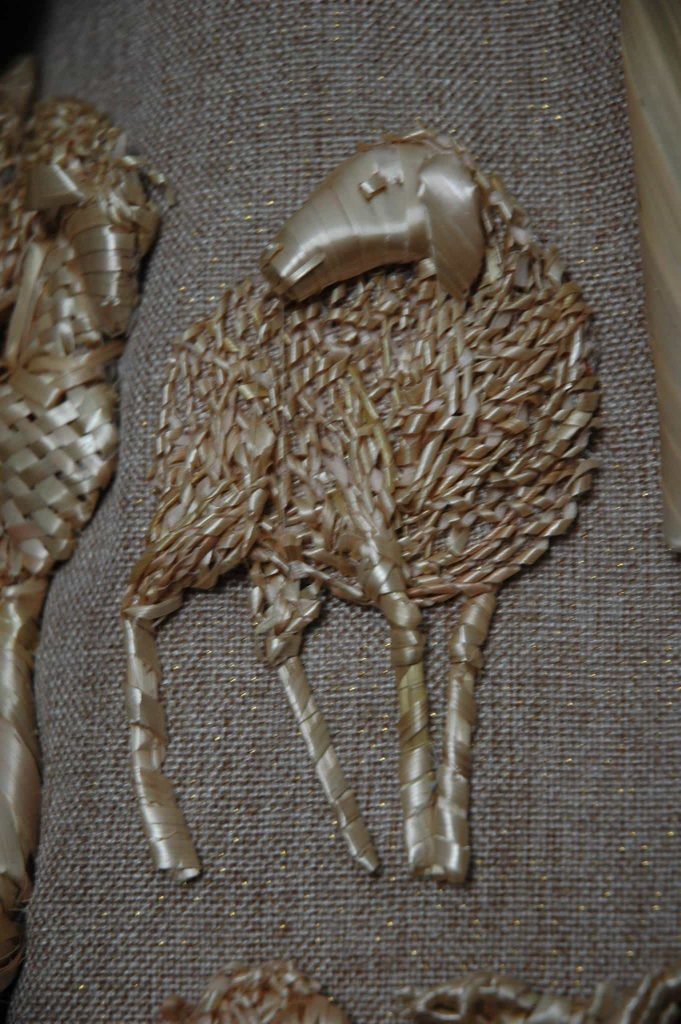 And finally an image of the artist at work. 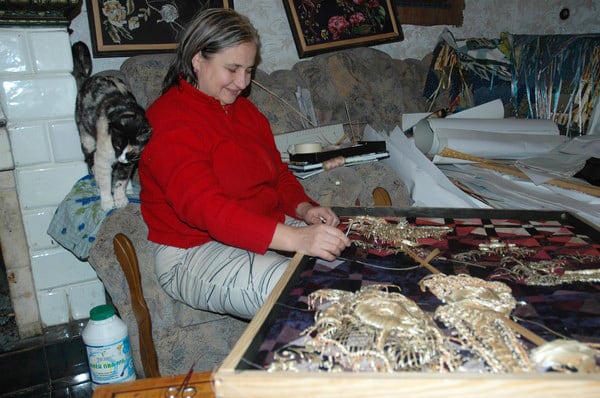 Now that you are inspired, consider our flattened natural or bleached Fantasy Straw or  straw threads as the place to begin your own straw quilting journey.

We look forward to seeing what this straw master does next!