Many kinds of plant fibers have been used to make shoes.  Shoes have been a part of the human experience for eons.  Shoes were and are made from various materials.

In China, archaeological finds show that as early as 7,000 years ago, ancient Chinese had learned to make shoes from plant fibers. 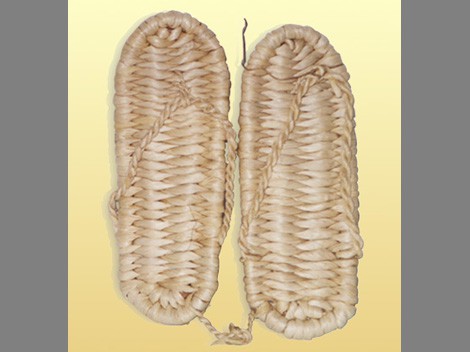 One article found in traditions.cultural-china.com reported, “In ancient times almost all people across China wore straw shoes, excepting only nomadic tribes.  The main difference in mode of this footwear was that people in the frigid north wore thick straw boots, while those in the hot, humid south wore straw sandals. Straw footwear was worn by all, whether they were nobles, men of letters or farmers.”

Assuming that is an accurate account, shoes made of straw in one form or another have been made for thousands of years.

As broad an area footwear made of grasses might be, The Straw Shop found the area of straw decorated shoes of particular interest to discuss. The Straw Shop, thus far, has been unable to locate any written accounts describing anything about them. How were they produced?  Were straw decorated shoes produced in any real number?  Were certain locations credited with their manufacture ?  Were they made and decorated by individual shoemakers? The truth is, we just don’t know.  Fortunately straw decorated shoes have been saved and may be found in museums and historical collections around the world.  The Straw Shop is especially appreciative to share the following images from many of the museums.  Most of the items pictured are housed in museum storage and are not on public display.

According to our research we have located a few examples of straw decorated shoes from the 1600s spanning to the 1900s. 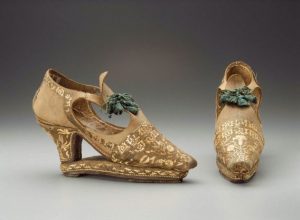 We found a very early pair of straw decorated shoes, thought to be Italian from 1670, known as a slap shoe  A slap shoe made a clicking or clacking sound when worn due to its construction. The shoe style   became quite the symbol of wealth in fashionable shoes. The appliqué of straw on these shoes is spectacular. 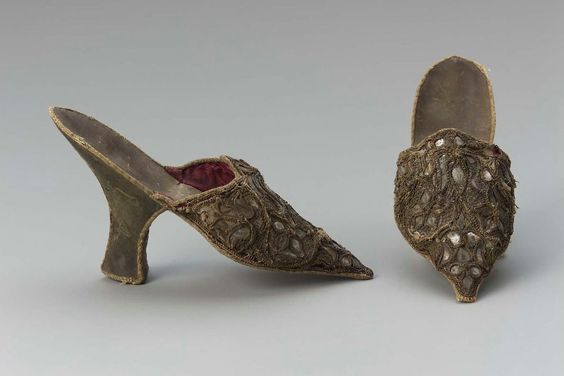 Thought to be from 1750, the pair shown below is decorated with ornate straw strips or splints.  The embroidery is integrated into the straw splints with the stitches formed between the splints not splitting them. This is a style of embroidery, originating in gold work embroidery. It is called Or Nué Embroidery.   The flowers and leaves are embroidered in silk and the scalloped edges in silver-gilt thread. The shoes have a pointed toe and a comfortable, low, broad heel covered in silk satin to match that of the lining. 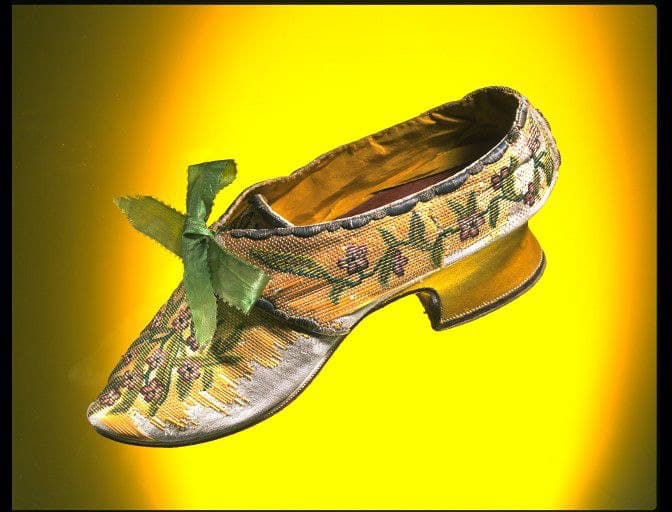 Another view of the same pair: 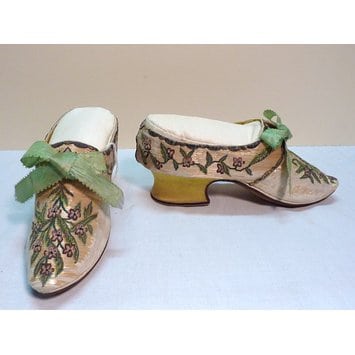 According to the Victoria and Albert Museum, “As early as 1750 the wealthy had been wearing garments with straw decoration that evoked the natural and pastoral world.”  Along with straw adorned garments came straw decorated shoes.  How the straw decorated shoes were made may have been left up to each individual shoemaker for all we know.  The photos shown below are quite rare to see.  They are components of similarly woven straw embroidered pieces intended to be joined together to make a shoe.  The shoe components shown below are in the collection of Luton Culture. 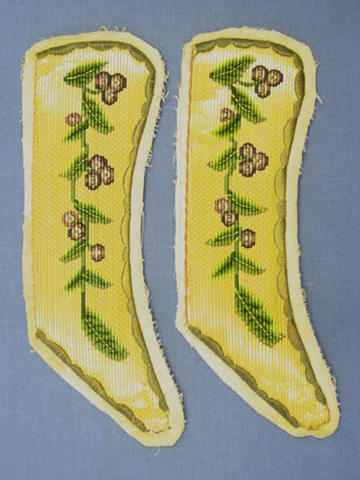 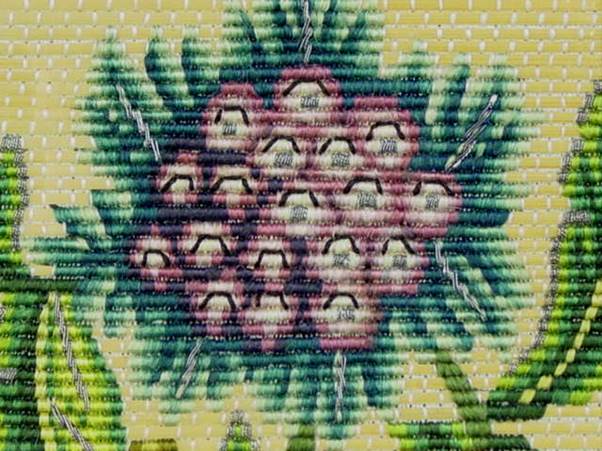 These shoe parts are described as silk and straw-work floral pattern in colored silks and tinsel on a background of split straw sewn to linen, consisting of the components of shoe uppers and sides.

Described as an 18th century pair of shoes, the next pair of shoes are similar in construction to those previously described from the Victoria and Albert Museum and Luton Culture.  The shoes from the collection of the Museum of Fine Arts, Boston, describe the shoes as, ” Upper of straw couched to plain cotton and embroidered with polychrome silk yarns in floral motif; silver embroidered swag and white silk binding along top. Pointed toe. White leather insole and lining. Condition: straw broken and missing in places; binding, leather on heel disintegrating; insole worn.” 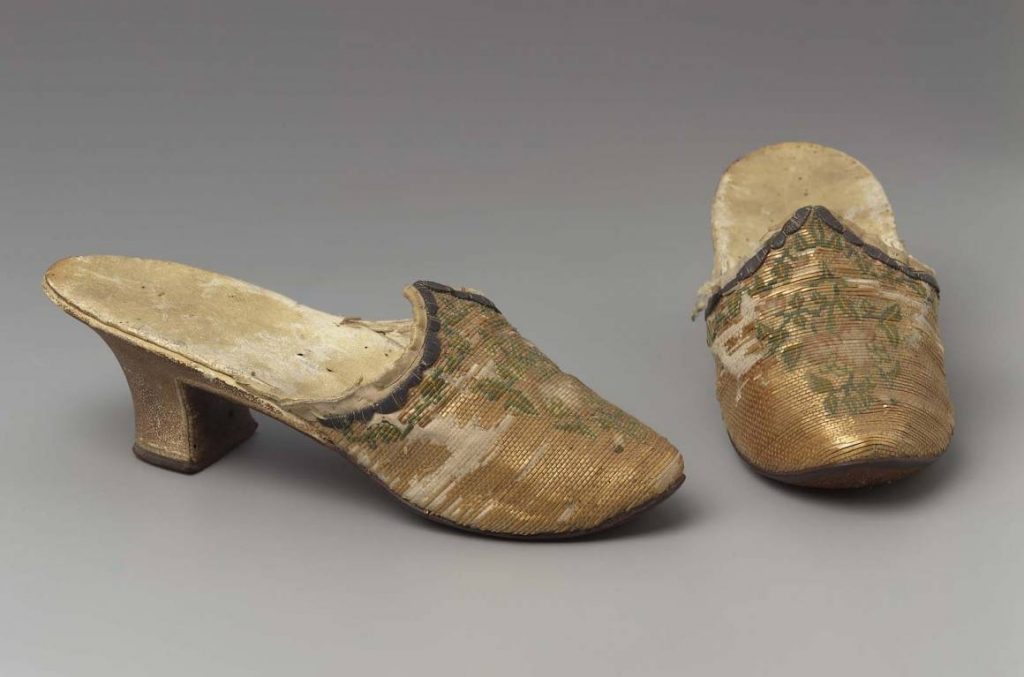 The Napoleonic Wars, 1799-1815, disrupted trade everywhere in Europe and America. Its effects lasted well into the 1800s.  Due to the wars and embargoed goods, fashions changed too.  Structured fashions of boned corsets and hoop skirts relaxed significantly.  During what would be called, in England, the Regency period (1811-1820) the Empire dress style was embraced.  Shoe styles changed as well.  According to headoverheelshistory.com, “To go with all the breezy less structured dresses during The Regency were breezy, less structured shoes.  No more heel.  No more discomfort. No more squashing toes into rigid up turned points.  Let’s talk, slippers! Sure they still had pointed toes but they were made of soft material.  There were only three styles of shoes to choose from in the later part of the century:  the boot, the clog and the dress slipper.”

The nine-inch long shoes are described by Fashion Institute of Design and Marketing (FIDM) as follows:

“These slippers, made of straw and horsehair, were intended for use at home. They were probably made in the Tuscany region of Italy, whose port city of Livorno (traditionally called Leghorn in English) had long been the preferred source of straw for fashionable ladies’ hats. A horsehair mesh supports a variety of intricate straw plaits, braids, and ornaments that were likely surplus trimmings from the bonnet industry. Crimson silk linings highlight these minuscule twists, spirals, loops, and weaves.

The fragile shoes required a light, graceful step. The feminine ideal of the 1830s and 40s owed a great deal to the popularity of ballerinas, who embodied demure poise and refinement onstage. Their costumes were a major influence on fashion, particular their delicate, flat-soled slippers, still worn by dancers today and sold as fashionable street wear under the name “ballet flats”. 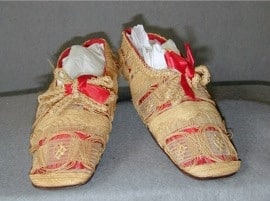 Some readers may notice these shoes, and the next few pairs included, are actually made from products more commonly used to make hats in the 1800s. Look carefully and you will see loom-woven bands of straw and horsehair and decorative plaits and edgings made from straw.

From the Kyoto Costume Museum in Japan we present another pair of house shoes from the same period. These shoes are thought to be Italian in origin.  This photo is an excellent example to discuss the hat industry and the techniques incorporated in other items such as purses or shoes.  The toes and heels of these shoes are created from plait used in hat-making.  The horsehair has been worked into the loom-woven bands, or bordures, alongside ring plait, or cat’s foot plait. In hat making these bordures would have been cut to length and sewn onto a wire and silk base to form a bonnet.  For the shoes they have been cut to length and stitched to a base. 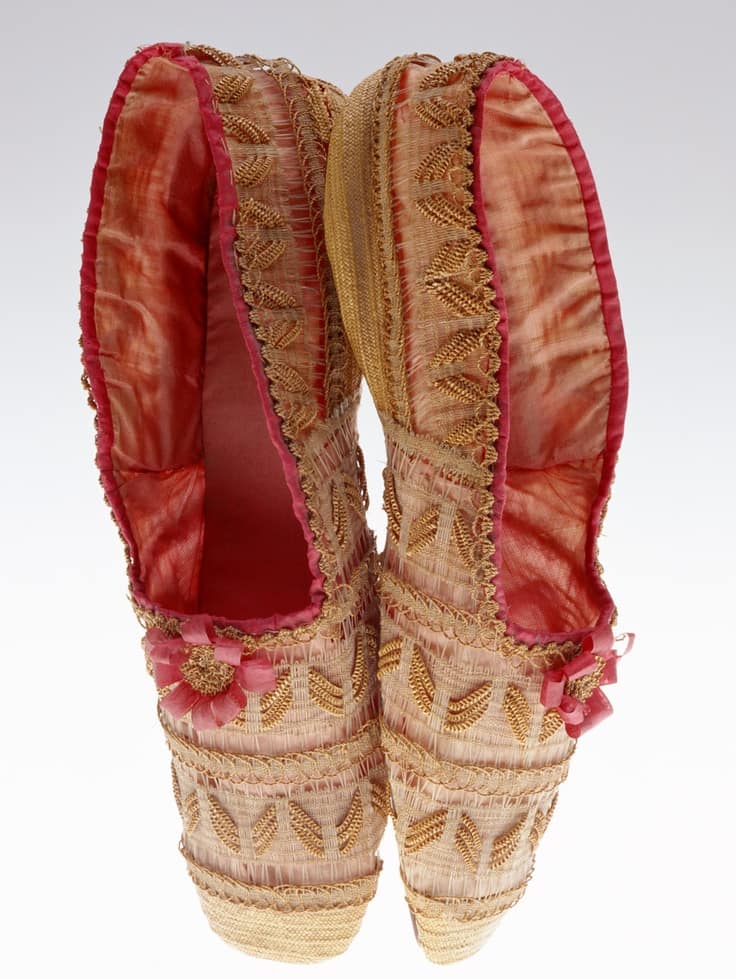 Crinoline and straw are described as the materials found in the below 1835-1840 pair of shoes. These shoes are from the Metropolitan Museum of Art, New York. These are interesting as although made from bordures the patterns are not in the common European styles. Could these bordures have been made in America rather than Europe as they suppose? 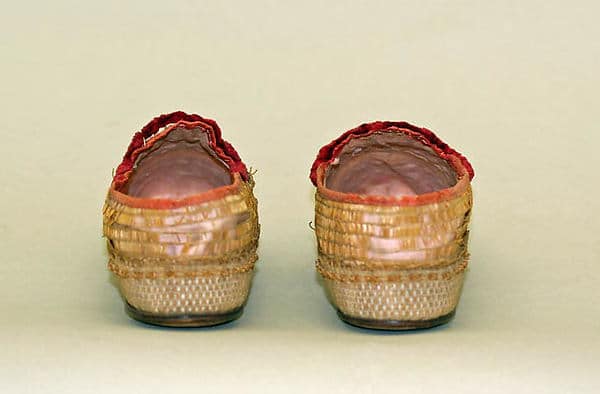 From the mid-1800s there are various examples of plain straw shoes made from the straw plait sewn together edge to edge.

The shoes below may have been made by cutting the shoe parts from straw hoods (or straw sheets) more commonly made into hats.  While the technique for sewing together the plait edge to edge is Italian, the trimmings used to edge the shoes, and decorations, are typically Swiss.

The shoes below, thought to be from 1846, are housed at the Danvers Historical Society in Danvers, Massachusetts: 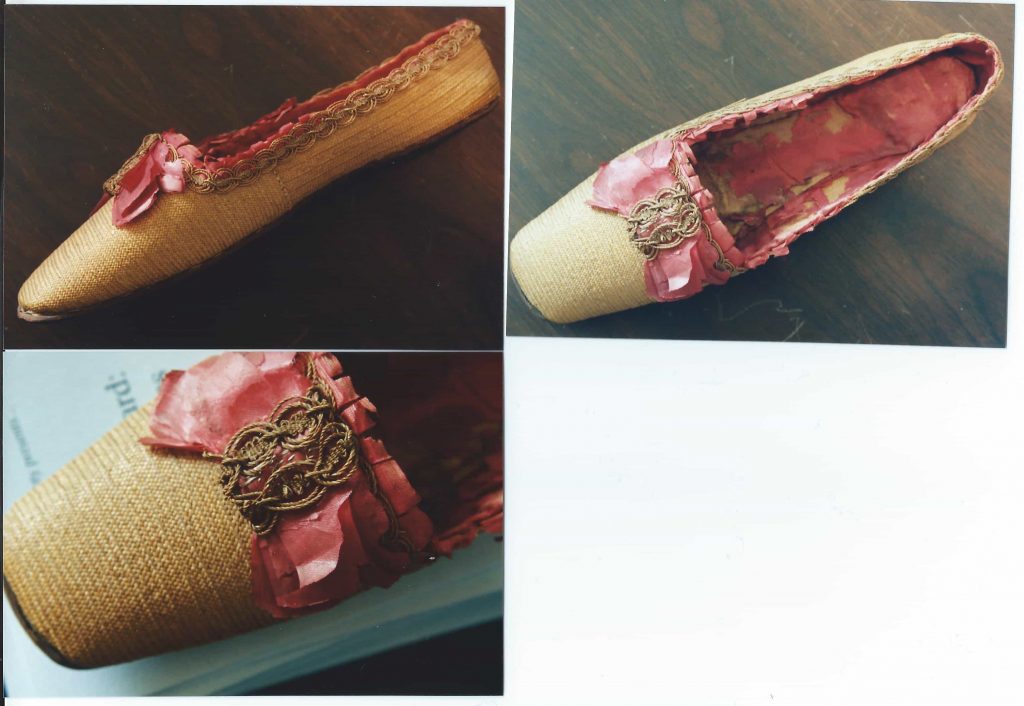 The red-bowed shoes below were cited incompletely on Pinterest as mid-1800s and Italian in origin.  The straw bordures are particularly nice around the top edging of the shoe.  The same narrow loom-woven edging, made of silk, straw threads and split straw has been used on the front of the shoe. 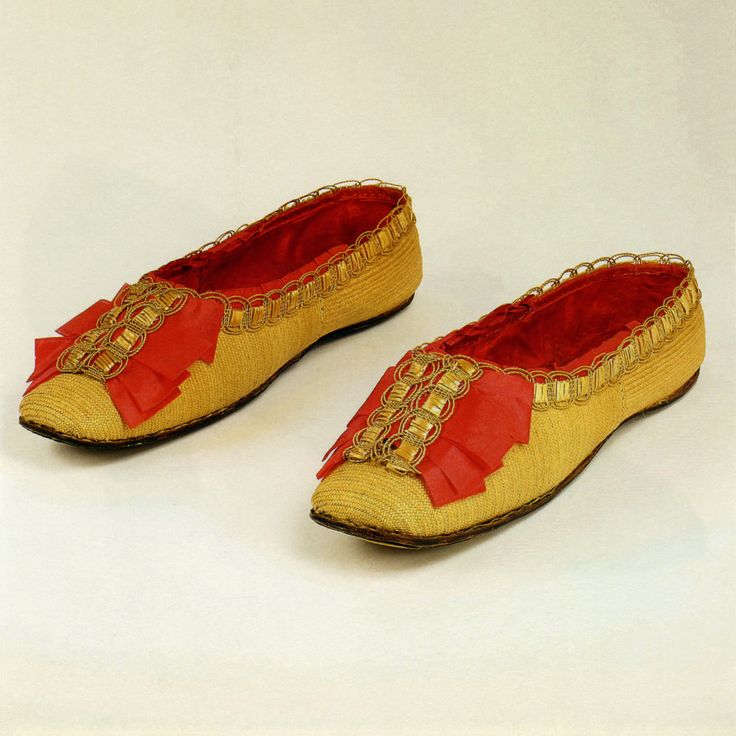 The Victoria and Albert Museum describe the next image as a plaited pair of shoes, 1860.  They write:  “the uppers of these lady’s shoes are worked in the Leghorn remaille technique, where fine straw plaits are joined edge to edge with invisible ladder stitching. This work was produced in Tuscany and was mainly used for high quality hats. However, at the height of its popularity straw plait was used to decorate almost all kinds of clothing – from bodices to parasols. The Italian-made plaits used for the shoes were probably sold as flat sheets, maybe even cut into the pattern pieces, and then assembled with various trimmings. This means that the shoe could have been made up anywhere in Europe, or even in America.” 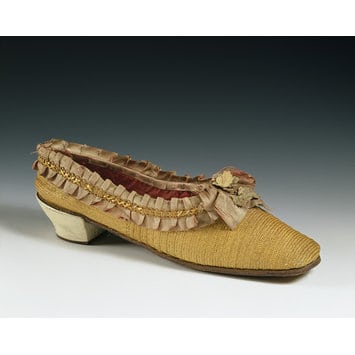 According to a Harvard John A. Paulson School of Engineering and Applied Sciences article entitled, “Shoes of the 19th Century”, the author states, “As late as 1850 most shoes were made on absolutely straight lasts, there being no difference between the right and the left shoe.” Other scholars have differing views.

The historical note about the shoes shown below is they were gifted to the Victoria and Albert Museum in London by Her Majesty (HM) Queen Mary.

Described as, “Pair of shoes for a child, made of plaited straw and catgut, lined with red silk. The shoes are heel-less with rounded square toes, and are in a slip-on style with no fastenings or adjustment. They are made in a striped openwork pattern, each with a rosette on the vamp.”  The catgut described is more likely to be horsehair. Incidentally, catgut does not come from cats!

The 6-inch long children shoes are further described as being made in England between the dates of 1850 and 1879.   As with the previous shoes, these shoes are also are made from hat products, straw plait sewn together edge to edge and bordures of horsehair and straw threads. The rosette is typical of those made in Switzerland in the mid-1800s to decorate hats. 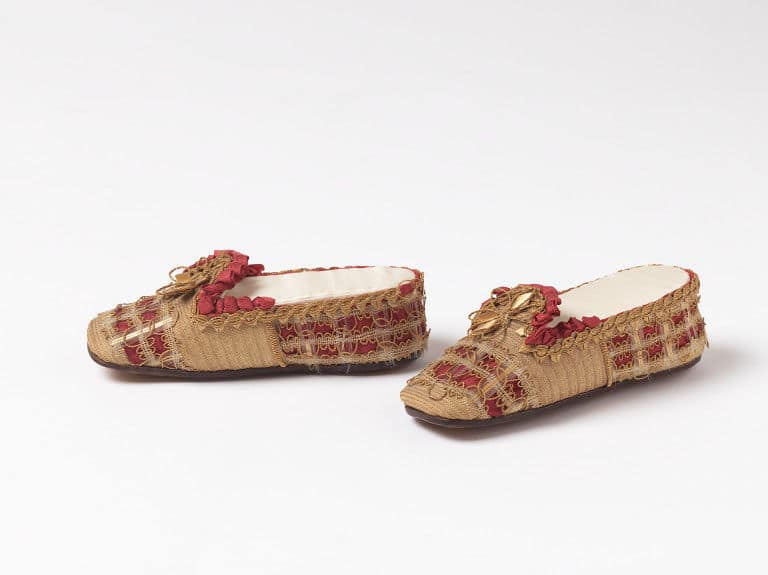 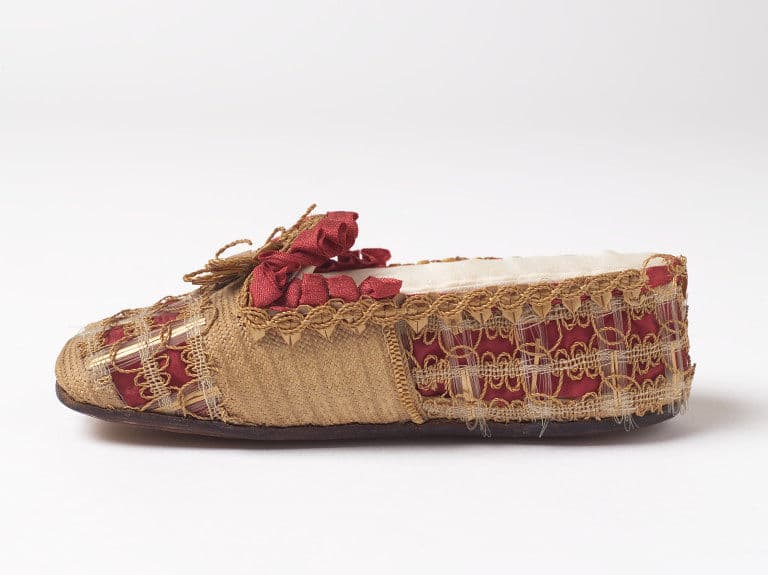 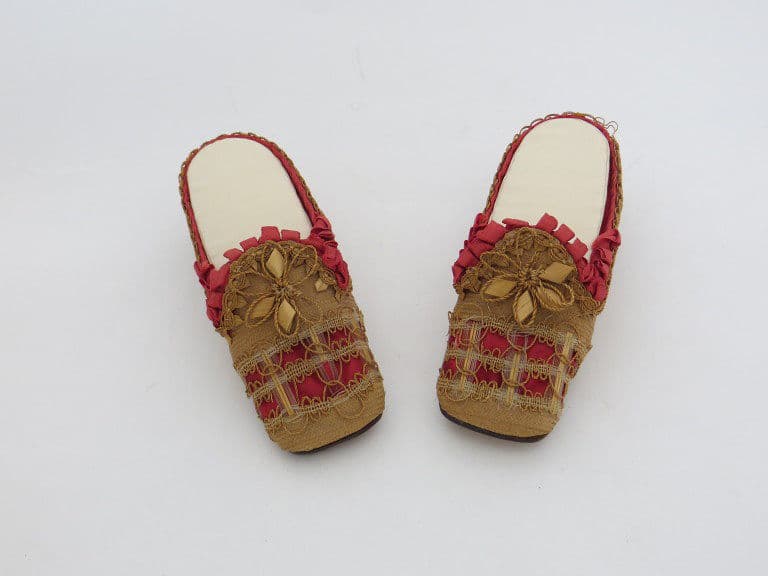 Described by Tennant’s auction as  “Two Similar 19th Century Children’s Straw Work Shoes with a leather sole, faded pink silk lining with a straw rosette to the front, 13.5cms, and another similar 12 cms (2). 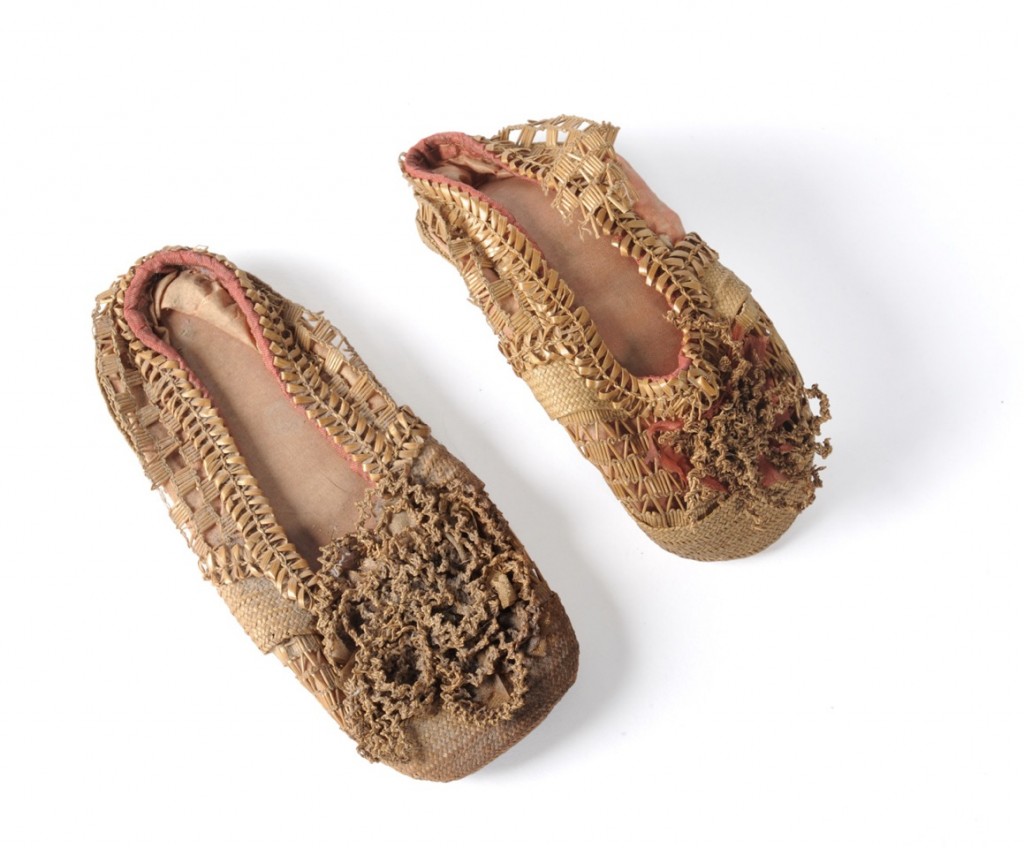 The origin of the next pair of shoes to be shown is unknown to the owner or  The Straw Shop.  However, we do know the shoes are made from straw plait and edged with a typical Swiss trimming made on a loom from straw threads and split straw. The rosettes are decorated with wooden beads covered with split straw and loops of straw threads. 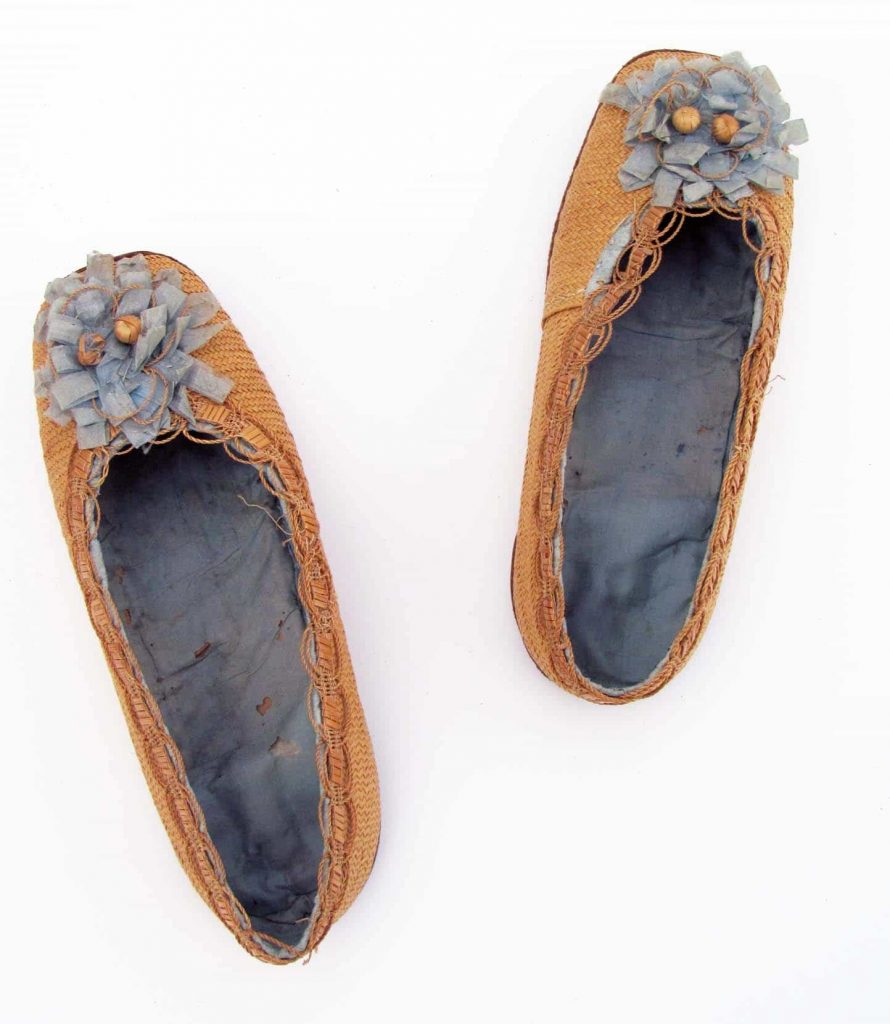 Raffia and man-made straw were introduced in the late 1890s.  These changes ended the exclusive use of natural materials previously found in shoes.

Into the 20th century, the shoes below appeared in a magazine dated April 13, 1941.  The shoes are an example of the work of the Freiamt, Switzerland. The photograph appears in two books about the Swiss straw product industry written by G. Rodel. 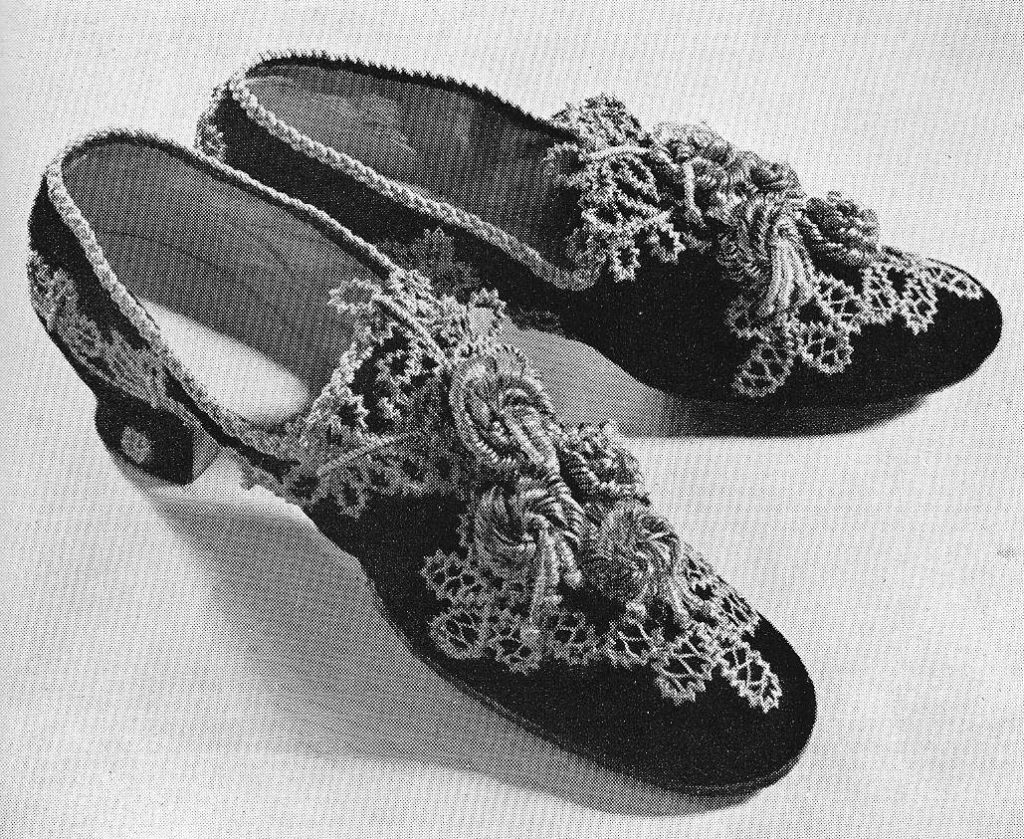 Now a photograph of the shoes and Rodel’s caption. 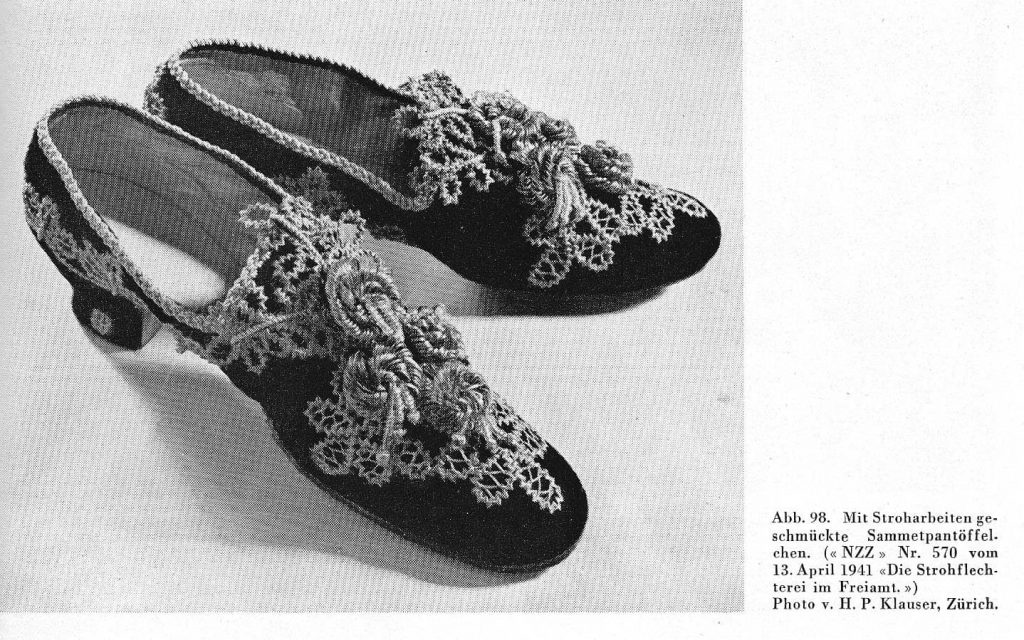 The shoes above are decorated with straw threads and other possible remnants from the once thriving  straw hat industry in Switzerland. 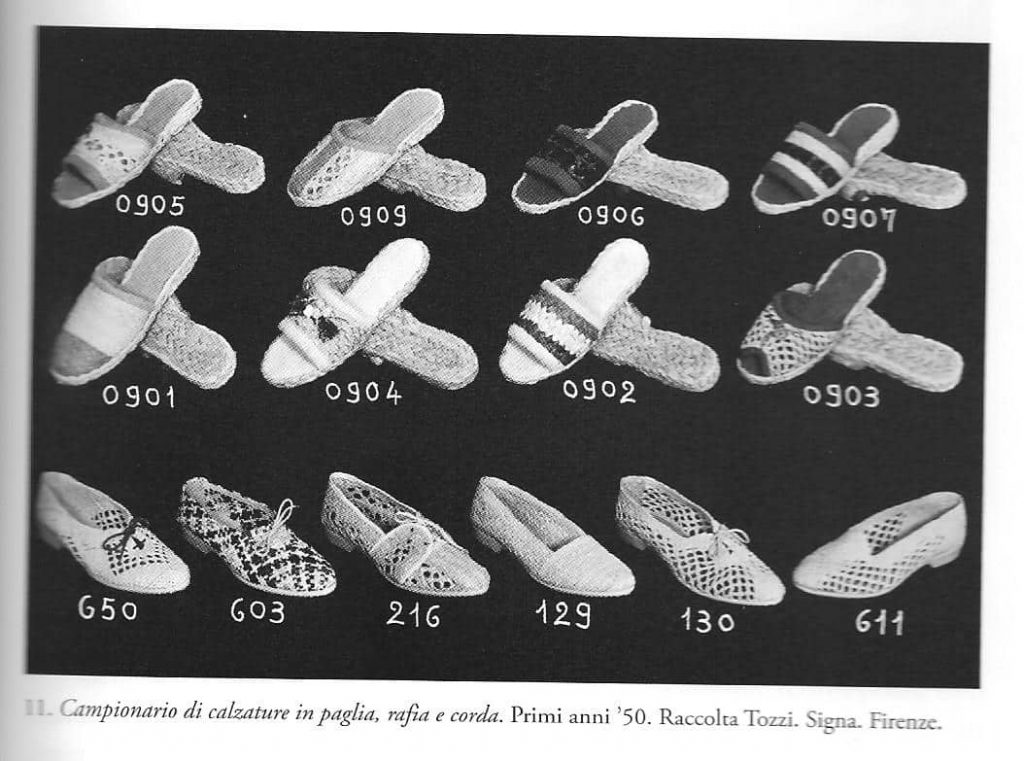 Straw decorated shoes did  appear in the 20th century but only occasionally .  The pink pair of evening shoes below was produced in France by House of Dior in 1956.

The Straw Shop is grateful to the collections of many museums and private individuals who made this article possible.  The Straw Shop encourages museums to carry the book, Swiss Straw Work Techniques of a Fashion Industry, as an invaluable reference to further identify their collections of straw shoes and other straw fashions.

The Straw Shop welcomes more information about the history of straw decorated shoes.