Straw thread winders are seldom seen today. The number of materials found in existing thread winders, of all kinds, is astounding: bone, glass, tortoiseshell, horn, and baleen are but a few materials that comprised this once common sewing necessity. Straw thread winders have a very interesting history. Part of their history is they are not Napoleonic straw work.

The very few times straw thread winders come up for sale, it has been common for them to be described as being from the Napoleonic War era made by prisoners. Napoleonic straw work has almost become a catch-all phrase for describing all sorts of straw work, no matter where or when it was actually produced. The description of straw  work just cannot be blanketed under one phrase. Citing the Napoleonic War era, consisting of three decades, as responsible for the production of so many varied straw work styles still found today is just not reasonable.

When it comes to accuracy, the straw covered thread winder shown below was indeed made by prisoners, but not by prisoners of the Napoleonic War era (1785-1815). 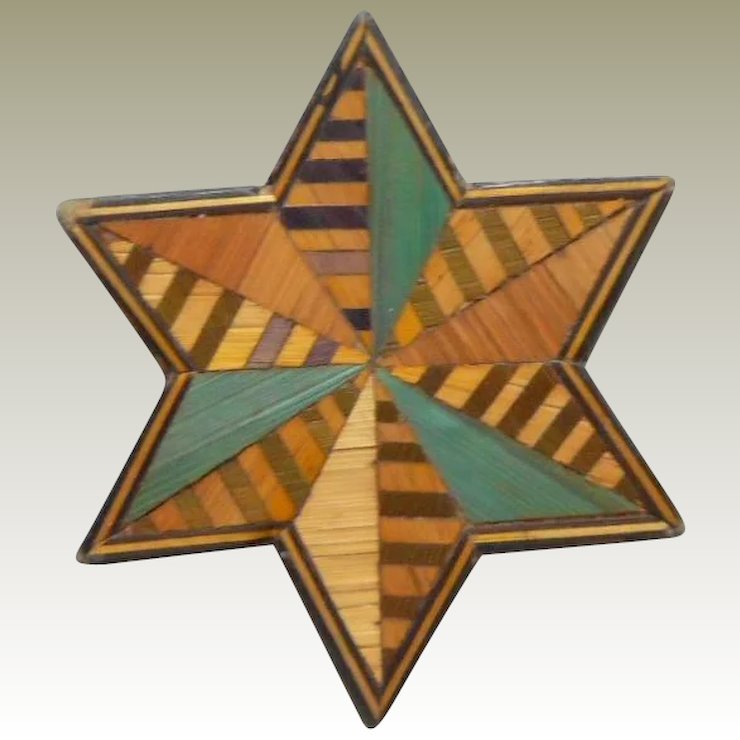 It would be another 55 years before this straw item would be made by a prisoner somewhere else in the world.

Natural dyes, used in the Napoleonic era were the same color dyes used for tinting anything, were achieved from vegetables, woods and plants. The same natural dyes known and used around the world for hundreds if not thousands of years.

In 1856, a young chemistry student, on break from the Royal College of Chemistry in London, stumbled upon the first aniline dye quite by accident. Eighteen year old William Henry Perkin’s accidental discovery produced a purple dye he called mauvine. Perkin’s discovery eventually found its way to commercial use all across Europe changing the world forever. He patented this first synthetic dye formula in August 1856, and set about manufacturing it on an industrial scale.Within a short amount of time, factories producing aniline dyes were working across Europe. 1860 marks the beginning of synthetic dyes, as used today. By 1900 there were more than 2,000 synthetic colors being produced world wide. 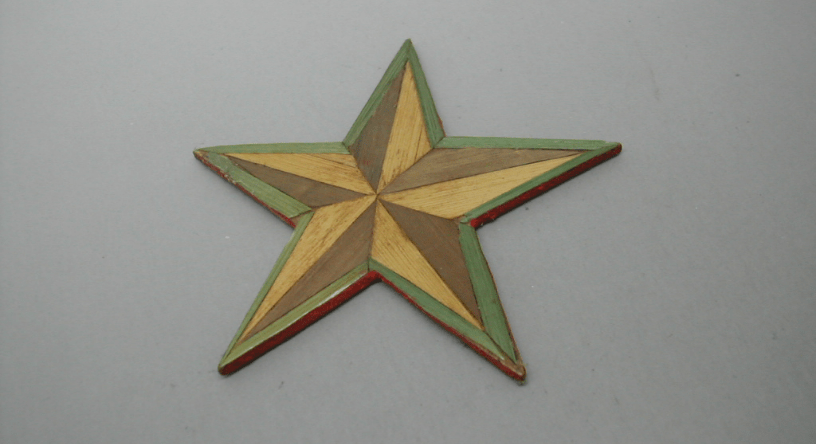 The prisoners who made the straw covered thread winders were in Germany during the last quarter of the 19th century. The dyed straw marquetry winders are thought to have been produced from 1870-1900. Thus far, we have been unable to establish the exact prison origin.  Thread winders have a long history. Their dyed colors originally were vibrant 100 plus years ago. Thread winders popularity ranged from items made by individuals to companies producing winders by the thousands using the materials first described above. Items made by individuals include the use of the inexpensive card and paper straw winders made in a traditional winder shaped star form.

Constructed of straw and cardboard, the fact these utilitarian pieces have survived intact at all is worth note. They were often thrown away as they did not wear well over time and were discarded when they became shabby.   As a result, they are quite scarce today. 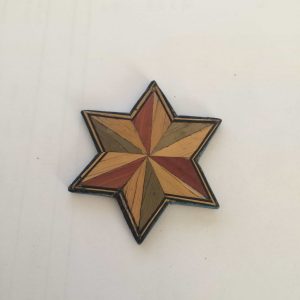 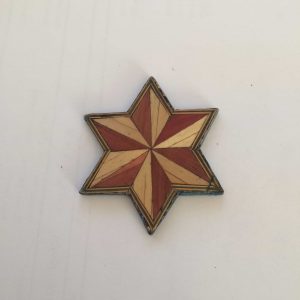 The winder below is purported to have once belonged to author Nerylla Taunton.  This winder, thought to be from 1890, appears on p. 101 of her book, “Antique Needlework Tools and Embroideries.” 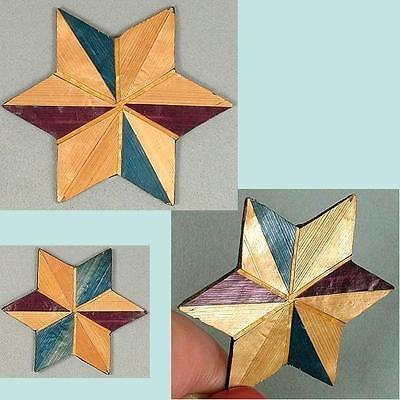 On the same page, the below image is yet another brightly colored straw thread winder.The Straw Shop notes the various star shaped winders shown on this page. Some winders are made with five points, some with six points. Note the below star shaped winder has eight points. It is the only eight sided star straw winder we have located thus far. 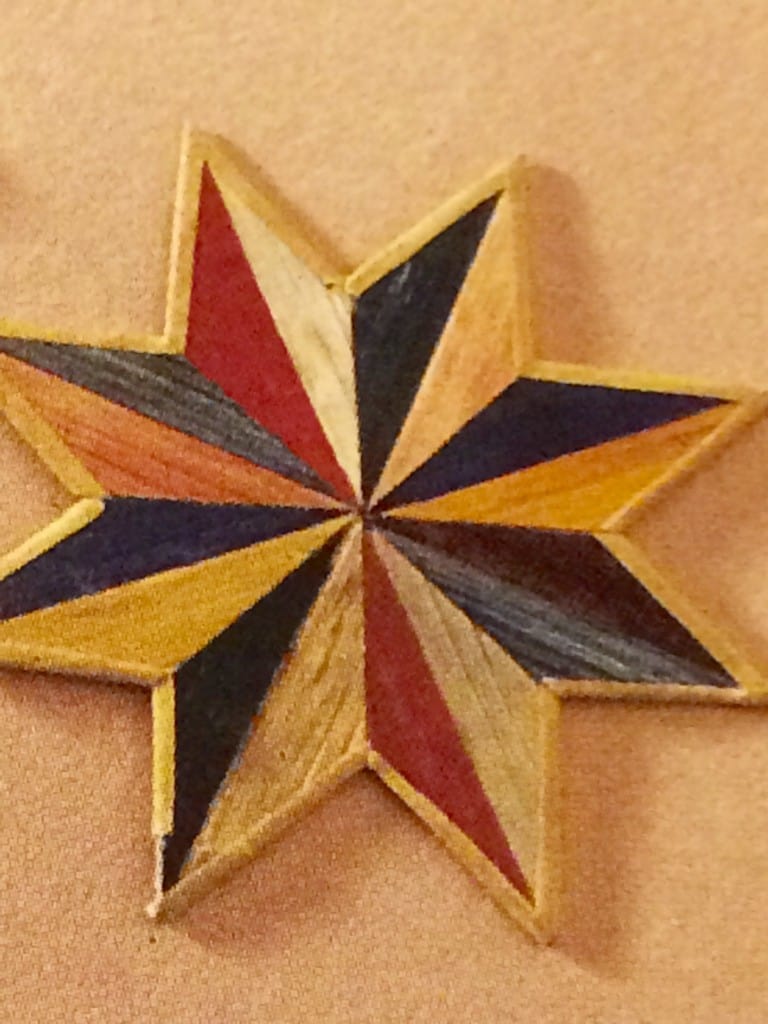 The winder shown below measures 1″ 7/8th inch from point to point. The patterns in the straw work are unusual based on other known examples. 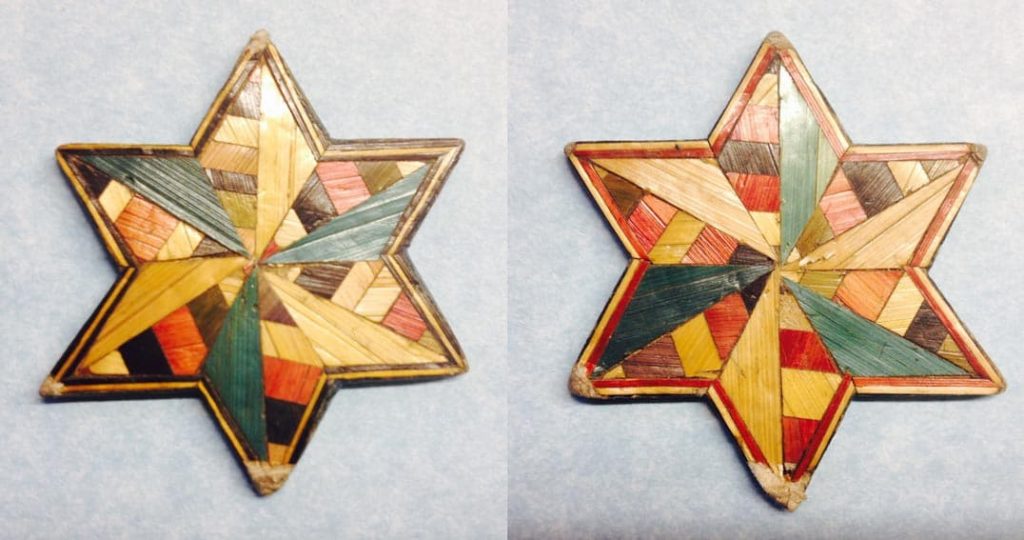 Courtesy Carole Morris Collection
The straw stars made by prisoners vary.  The Straw Shop also notes the various star shapes of the winders shown here.  Similar in shape and size, each straw winder was individually created and decorated; thus their appearances are unique through the dyed straw color selections, placement, and number of points in the star shape.  Since they are similar in shape and pattern to those attributed by Pelham Burn to German prisoners, and given the lack of additional evidence, we are currently assuming these are also made by German prisoners.
The following thread winder is described as being 2 inches in length. 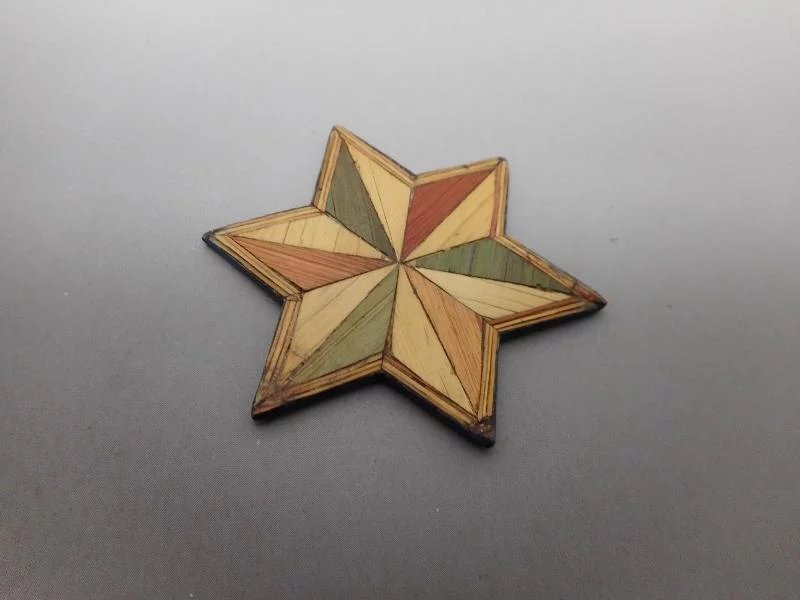 It is further described by the seller as “made by Napoleonic Prisoners of War”.  The straw is described as being natural, green and a faded red. It should be pointed out the advent of dyed aniline straw did not automatically replace the use of natural dyed straw. It is entirely possible examples of winders in this article are comprised of both types of dyed straw as they were contemporary dyes at one time. 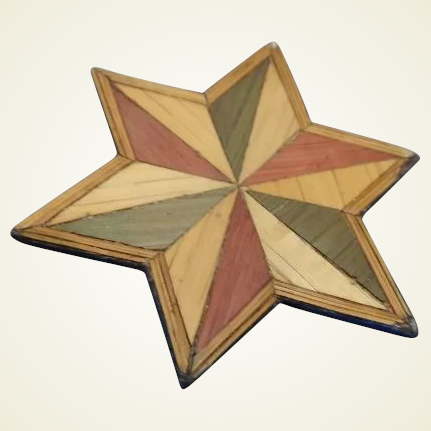 Thread winder described as c1800, Courtesy-curio-cabinet-on-ruby-lane
The front and reverse images of the below straw thread winder unfortunately were not attributed to a source, other than collected and posted on Pinterest.  In the photograph below, the winder is described as being “German from 1890” by Collector Carole Morris.  Notice the blue, purple, green and yellow straw. 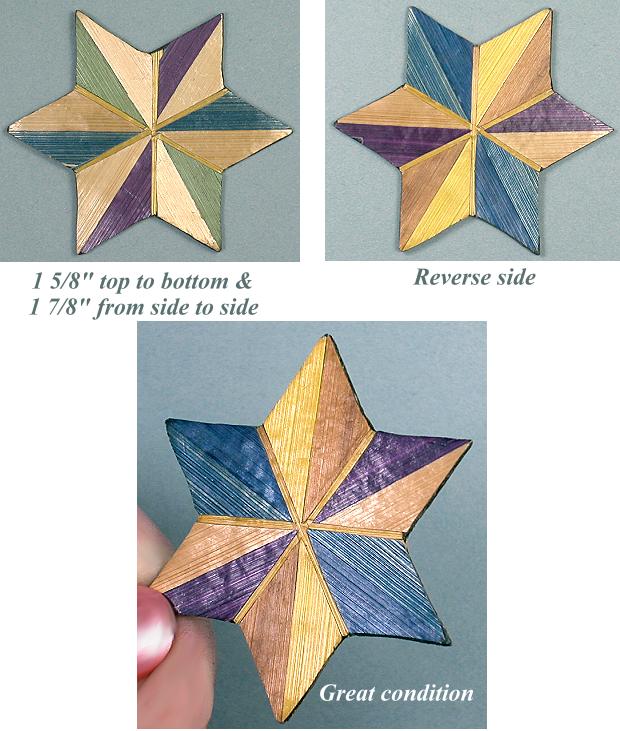 The photo found below on Pinterest describes the straw winders only as German. Please look carefully at the colors in these two samples. So very many of the shades shown below simply were not available until after the 1860s. 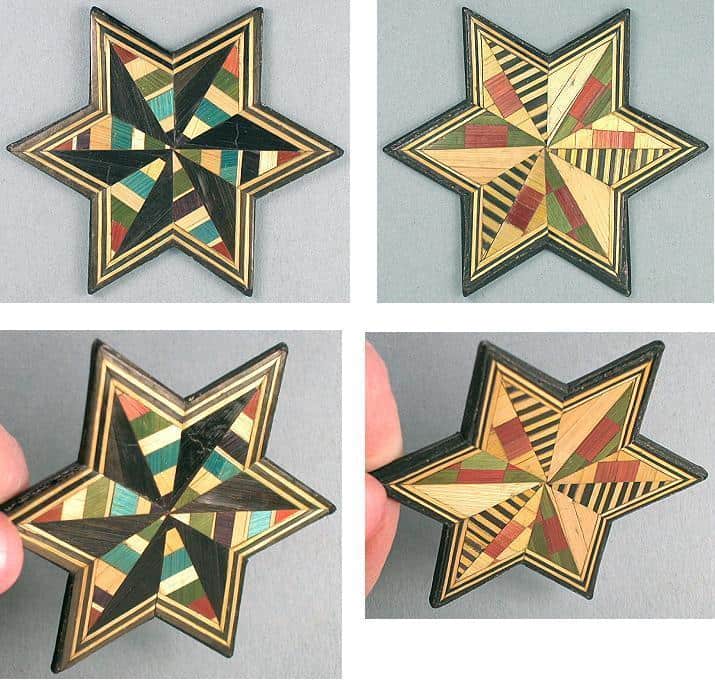 Described as German, Courtesy Pinterest
Located on RubyLane, the following thread winder, described as circa 1820, is described as approximately 2 inches wide. Both sides of the uniquely decorated winder are shown: 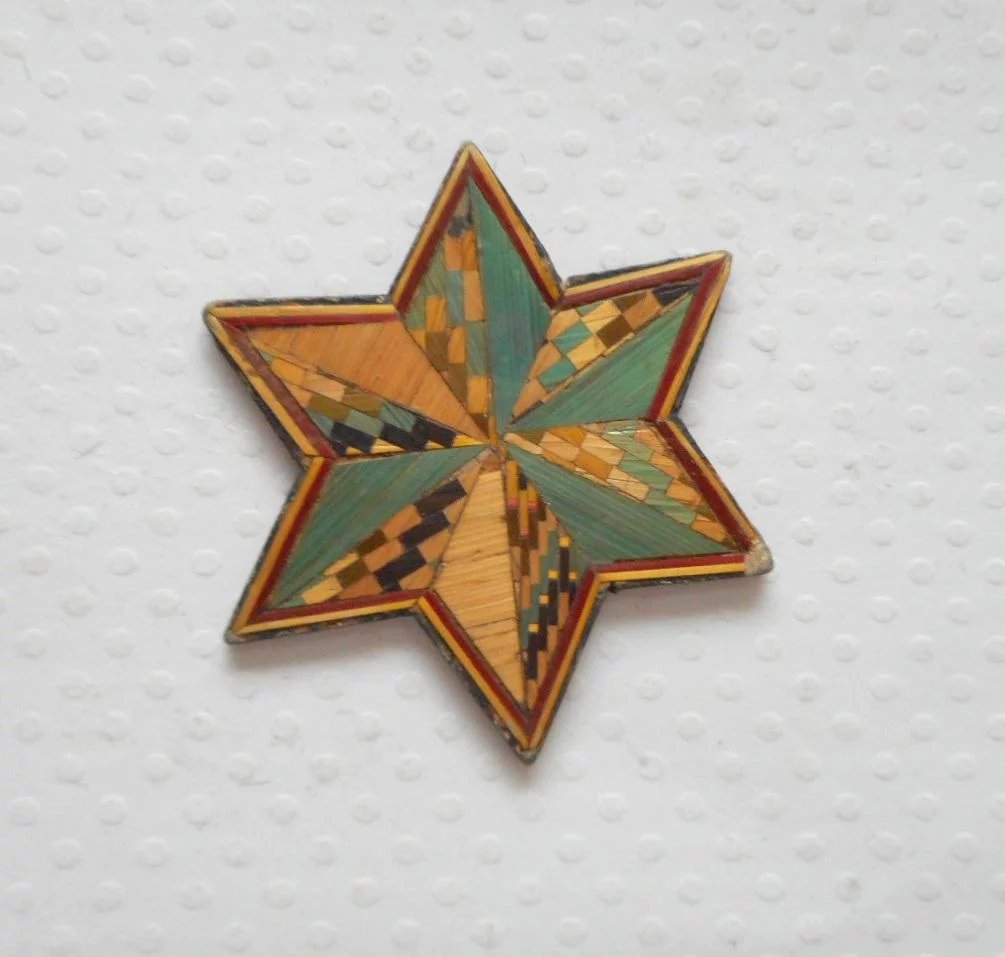 Another thread winder is shown displaying wear and creases. Described by the Ebay Seller as: “c1890 Straw Work Thread Winder Vintage Antique.” “The straw work is laid onto a wooden base. One of the spikes has damage to the straw work on one side.”  Three images are offered of this piece to show scale: 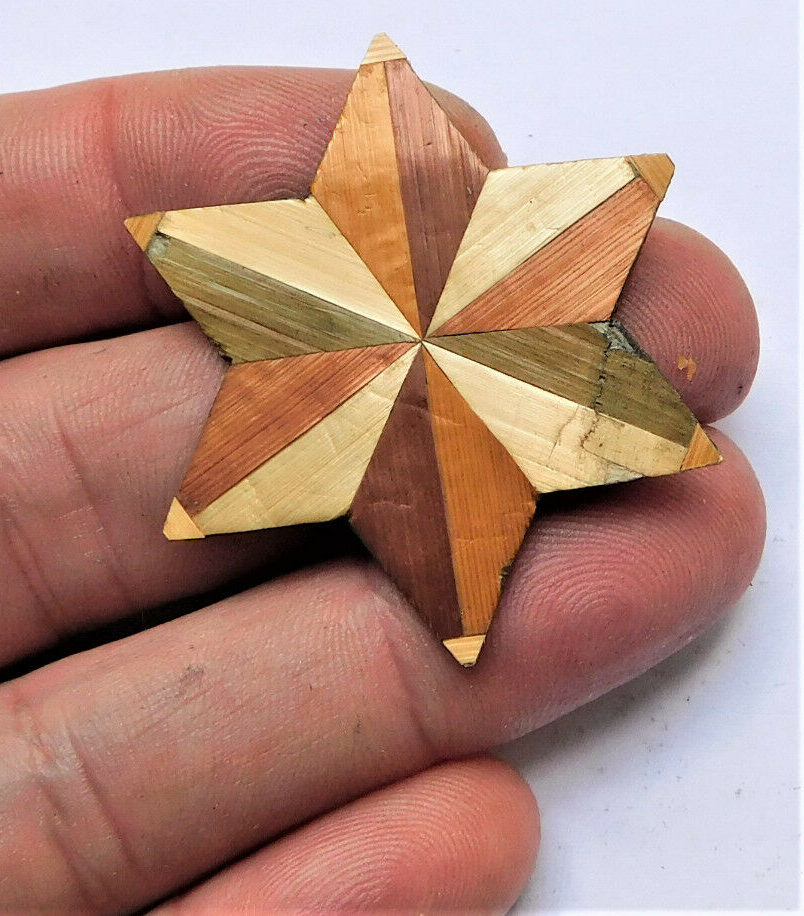 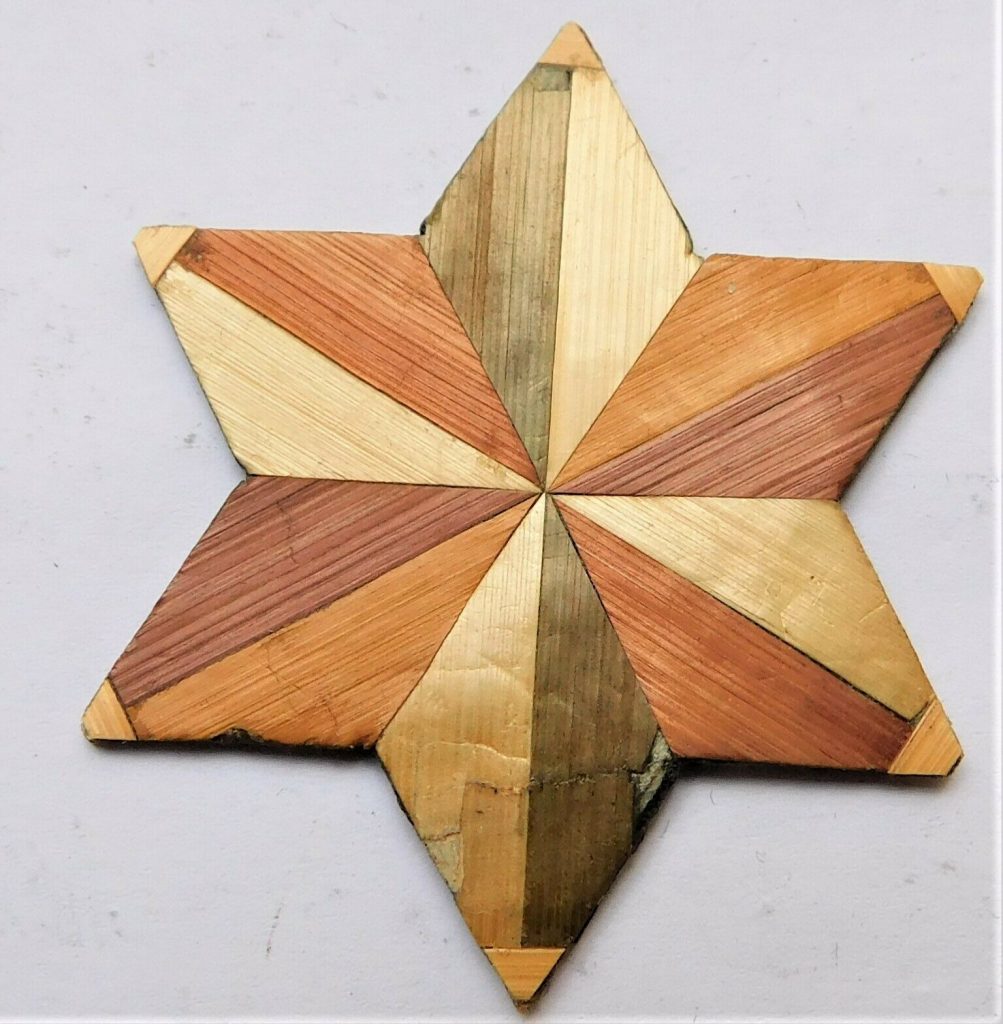 Looking carefully at both sides of this winder, it shows the winder’s individual decorative straw style   The fragility of straw covered winders is shown here. As discussed earlier, this damaged article was seldom retained. 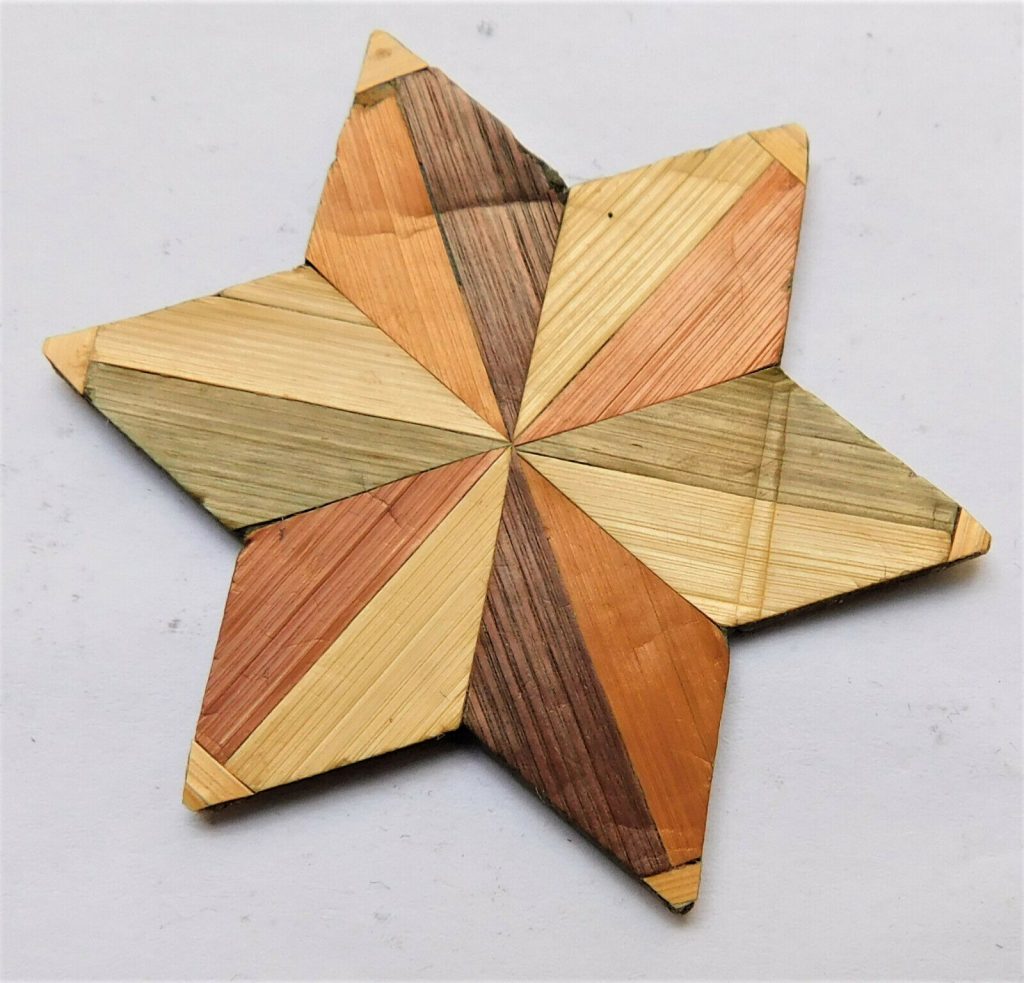 According to Diane Pelham Burn, author of Thread Winders: A Collector’s Guide,  in addition to the straw covered winders, “Winders were also produced of woven natural dried grass.  Many small baskets to hold thimbles were made of this material; thread winders however are unusual. ”  Further she instructs, “Sewing accessories of grass are exclusive to the United States and are Indian craft-work from the first part of the twentieth century.”  The “grass” covered winder shown below is edged with passe-partout tape which was widely used in home crafts during the 19th and 20th centuries.

With the invention of spun thread, sold on wooden spools, the necessity for thread winders eventually disappeared. The straw thread winders, found a century plus later, are truly remarkable examples of an earlier time.

The Straw Shop is exceedingly grateful to Diane Pelham Burn for documenting her passion and knowledge of sewing tools in her 1989 and 2010 self published books, “Thread Winders:  A Collector’s Guide”. Her researched documentation was invaluable.  Additional information was gleaned from “Mauve” written by Simon Garfield, Christie’s Catalog “, The Ruth Mann Collection of Sewing Tools and Accessories, part 1”, dated 2005. Two other books,  “Antique Needlework Tools and Embroideries” by  Nerylla Taunton and “La Marqueterie de Paille”, by Lison de Caunes and Catherine Baumgartner were of assistance.The kind permission of Carole Morris, Julie Holyoke and The Straw Shop for the use of images from their private collections. From eBay, Ruby Lane, and Pinterest the use of their images is gratefully acknowledged. For her assistance with this article, The Straw Shop is indebted to Veronica Main.