The Straw Shop is pleased to introduce a self-taught artist residing in Croatia.

As a child he loved to paint and draw for pleasure.  He worked in several mediums; colored pencils, oil paintings and water colors.   A professor of political science by profession; he decided to expand upon his artistic talents in 1982.  Using straw as his medium he made his pieces initially as gifts for special friends until he began to create special orders for customers.

His name is Jasmin Mesaric.

Over the last few decades he has been able to supplement his family’s income and children’s education through his straw work.

Admittedly he began creating straw images for his children such as Disney characters they would identify with.  He’s also done religious iconic pieces. He discovered his artistic talents and understanding of perspective, and shading was an asset when he merged into straw work. As with any dedicated artist he has evolved significantly since his early days of creating Disney character pictures.

His medium is rye straw.   As he explains,

” I draw a sketch on a tracing paper  for each motif of my art work.

I separate shades from lightest to darkest shades on this sketch.

In the meantime, I tone segments of a straw using a heated iron. Then I glue these segments on a final background based on the mentioned sketch. The straw is glued in a single layer.   I’m making straw intarsia for about 30 years.”

Here is an example of the rich tones in the color palette he creates through the use of his iron: 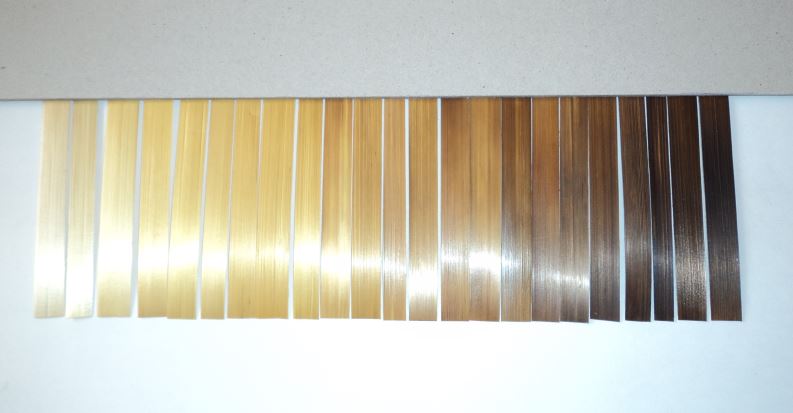 His work style is noticeably different than other straw artists in his region in that his style is like the assembly of an intricate puzzle.   As with each inlaid straw piece hundreds  are required for his “paintings” to come alive.  His paintings are approximately 40cm to 60 cm in size (or approximately 15 inches by 24 inches). The Lighthouse painting below took the artist more than two months to complete.   His subject matter, as you are about to see, it quite diverse. 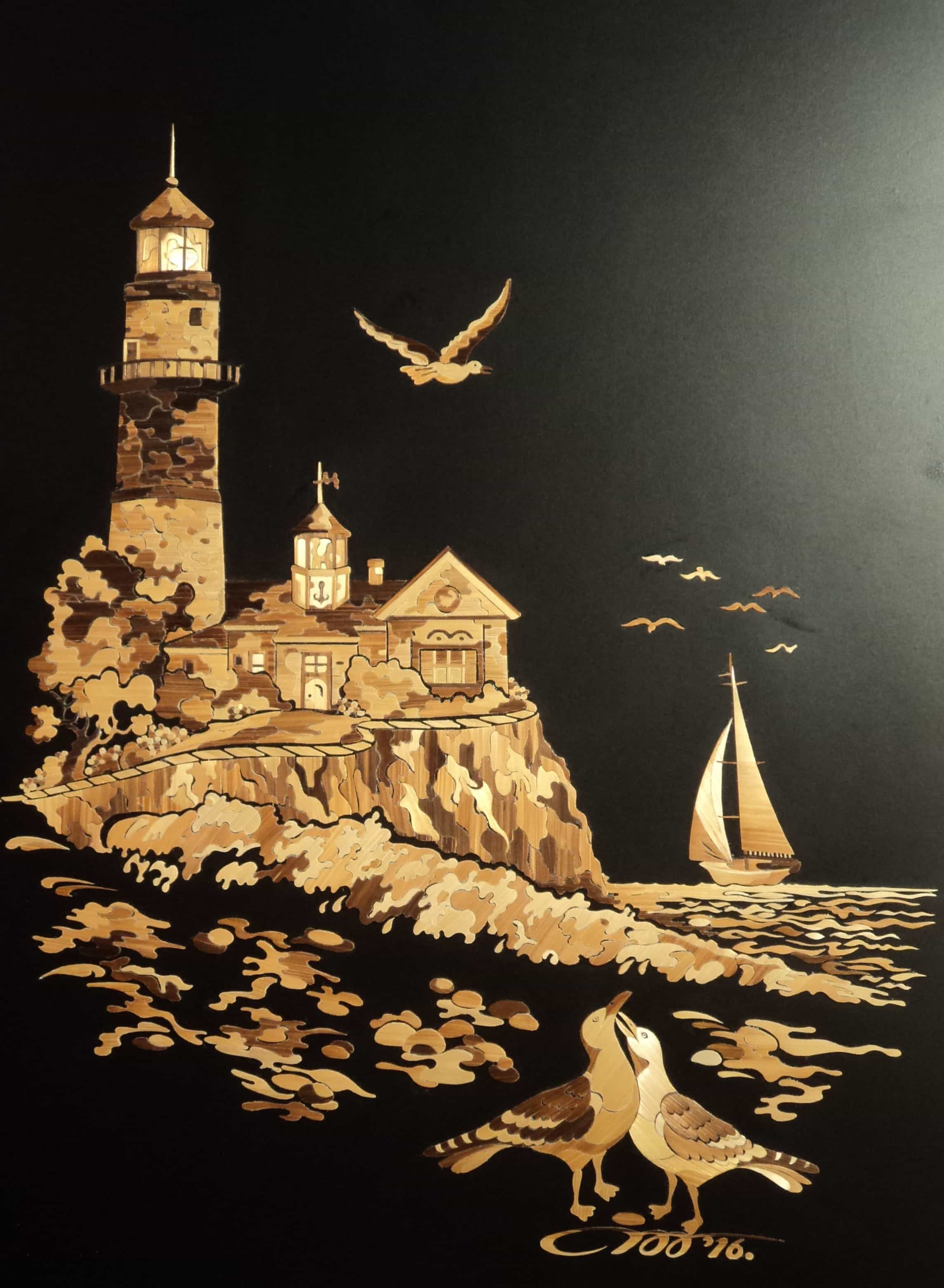 Based on the images shown below you will see his masterful use of  various straw shades to achieve his pictures.  The 1931 Ford shown below required nearly 300 hours to complete. 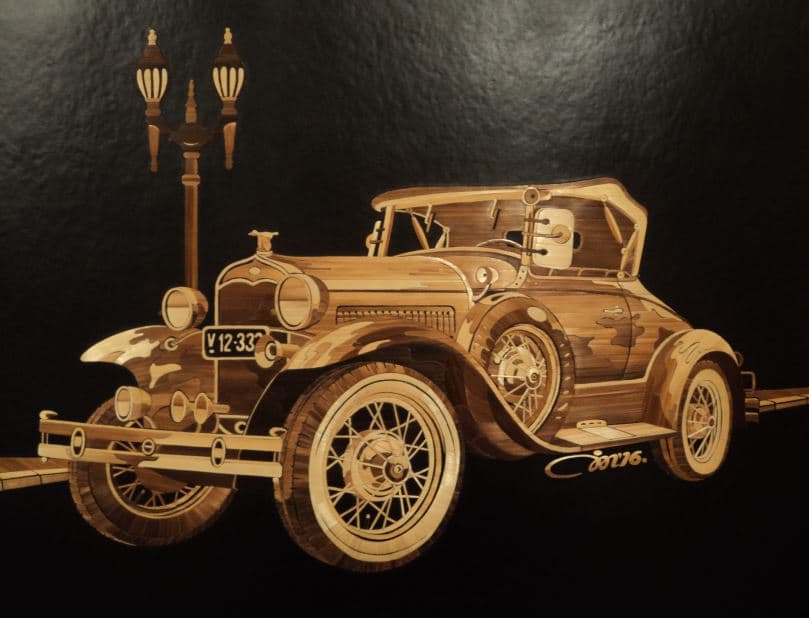 You might also enjoy the following gallery of close-ups of the car: 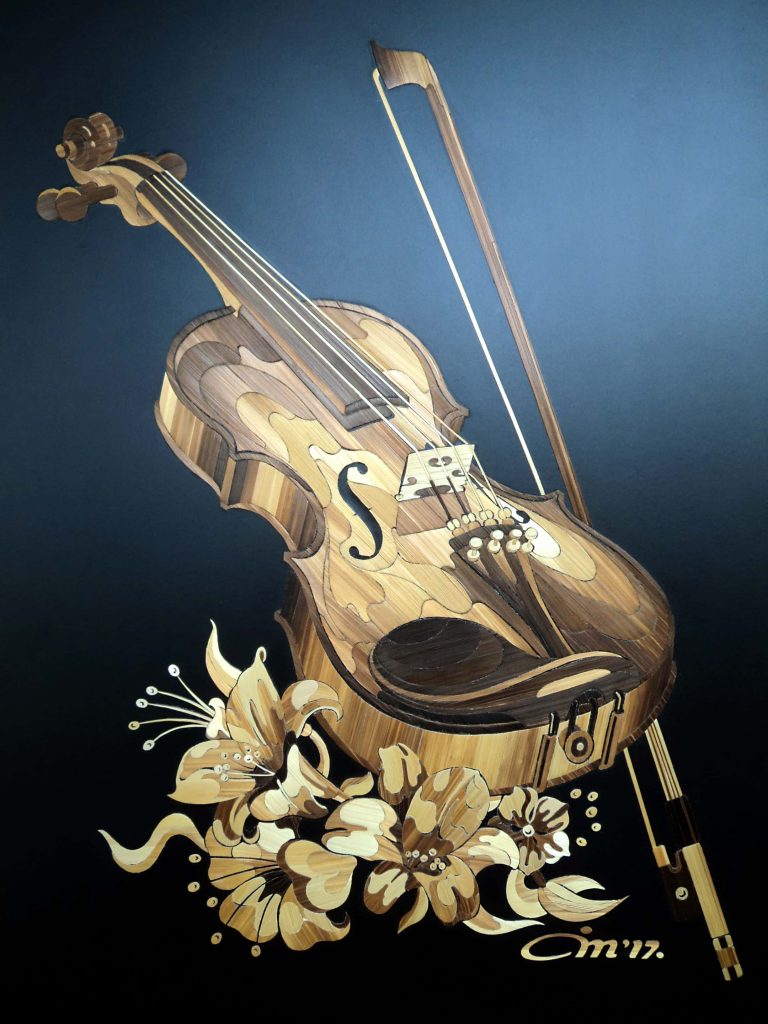 Here are some close-ups of Violins and Orchids: 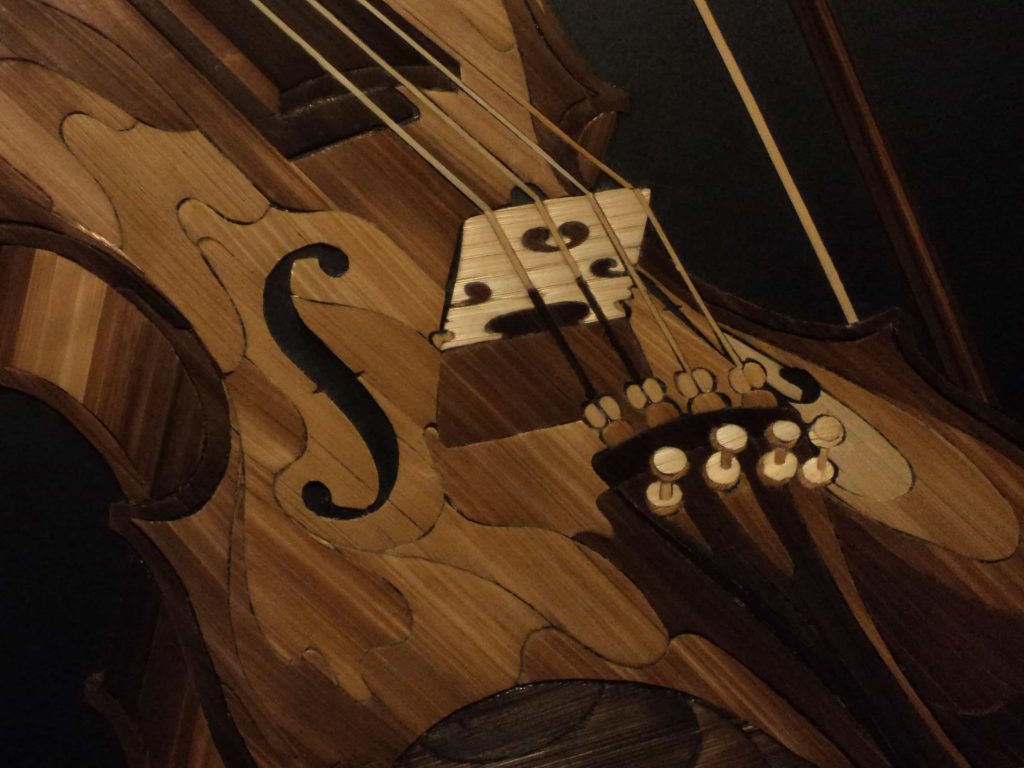 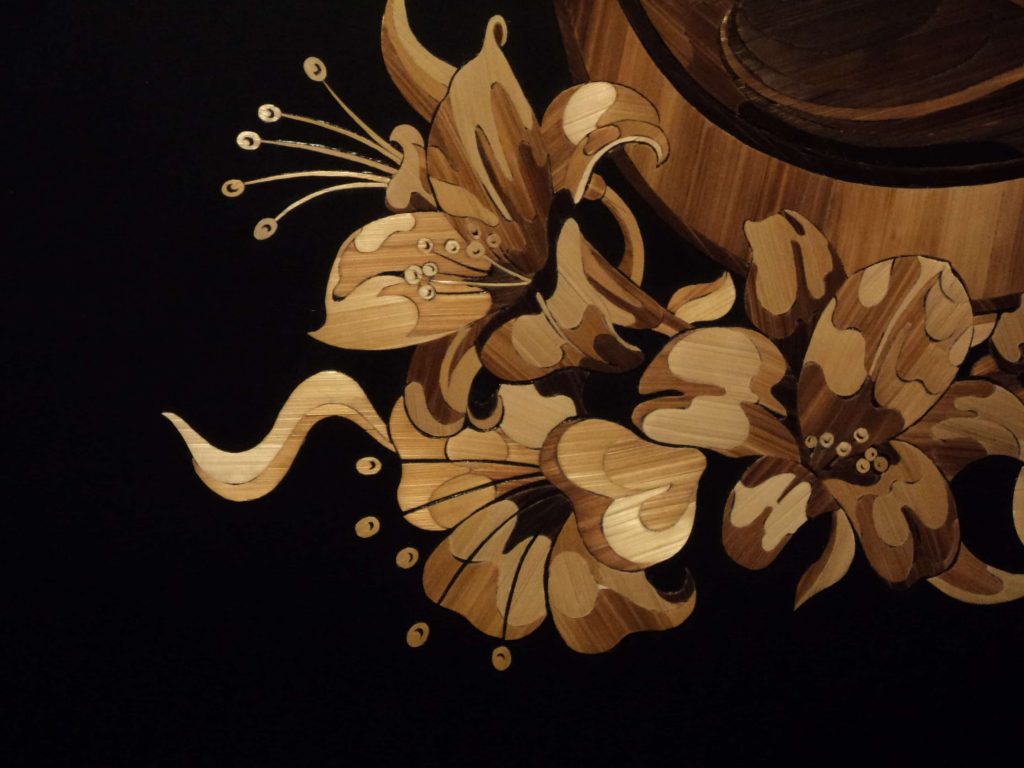 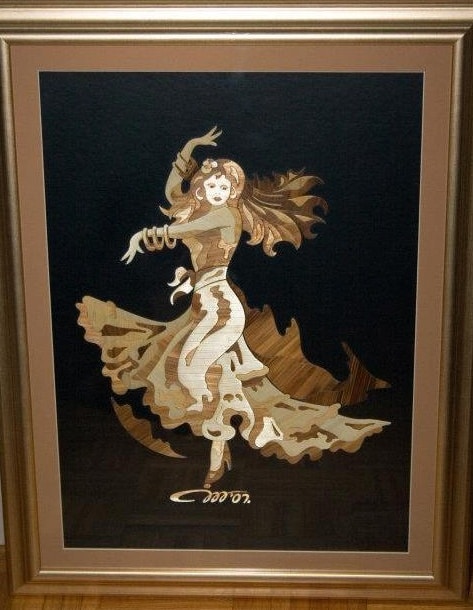 In 2018 Jasmin created and shared the following creation: 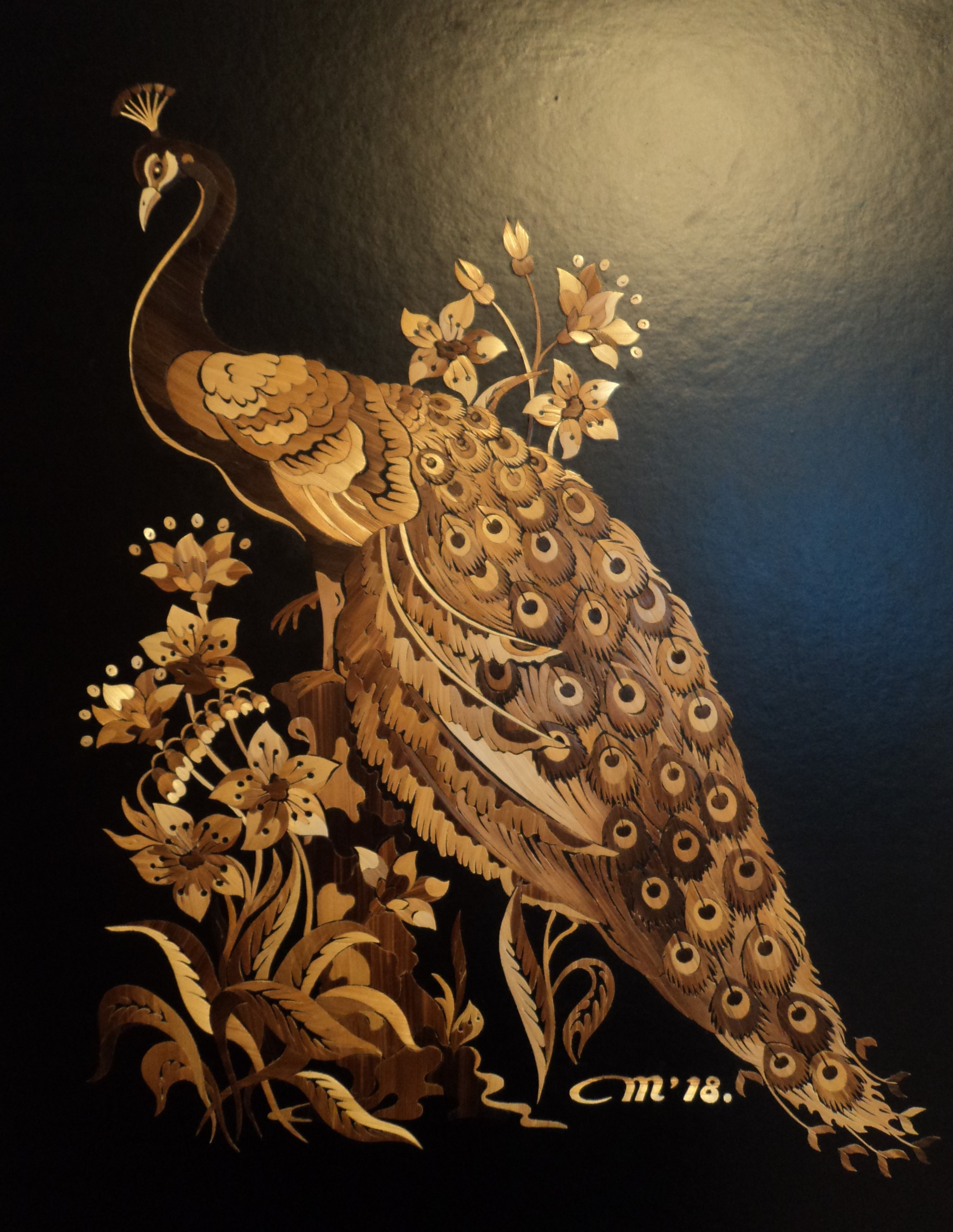 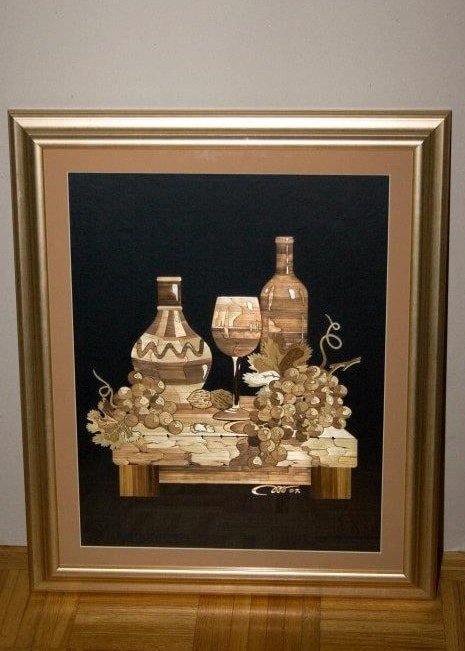 In Vino Veritas by Jasmin Mesaric

A before and after.  A customer brings him a picture and his interpretation.    The drawing in straw follows,  a little more than 20 hours of work later: 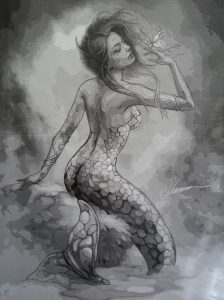 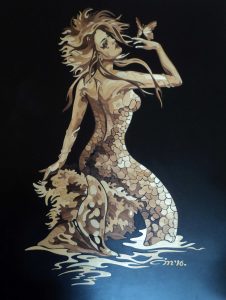 Though photographed through glass, the floral picture shown below demonstrates another example of mixed shapes expertly paired together in their design. 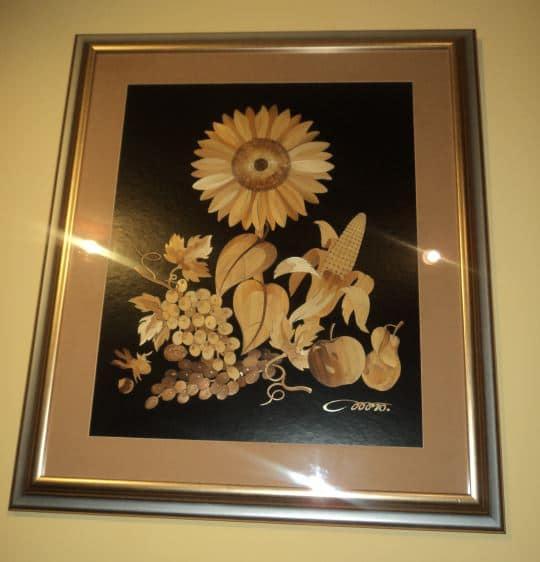 We thought you might also enjoy seeing the Sunflower picture in a little more detail: 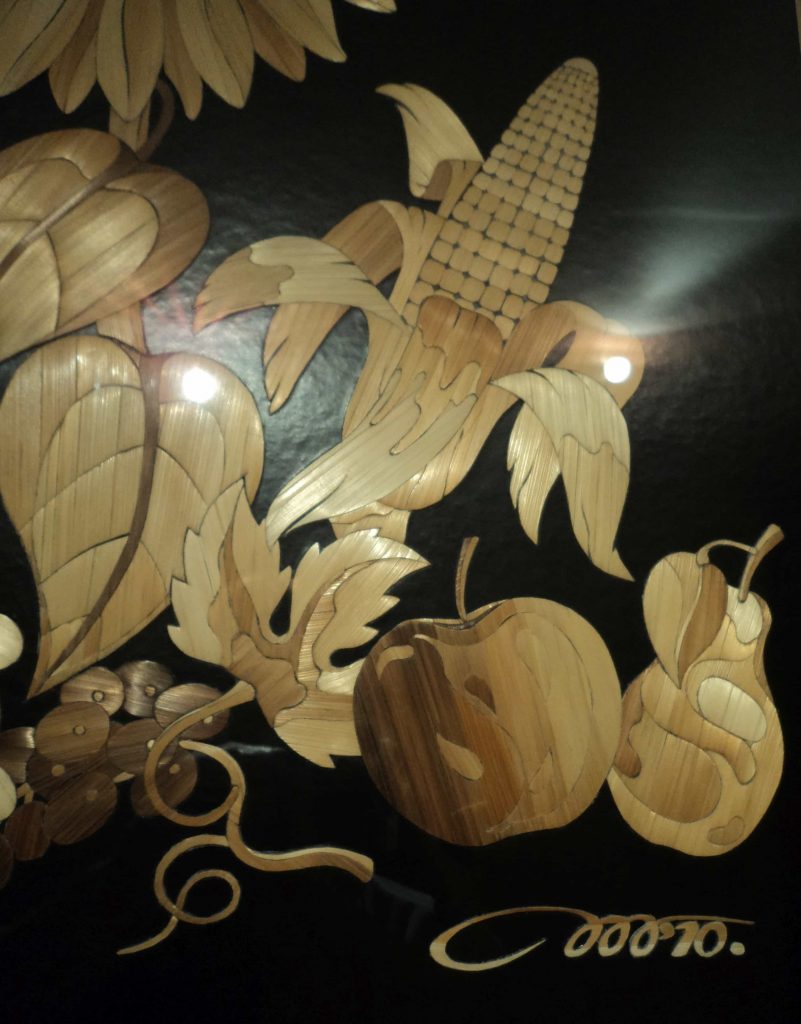 The detail of the center of his sunflower is quite impressive in its execution and design: 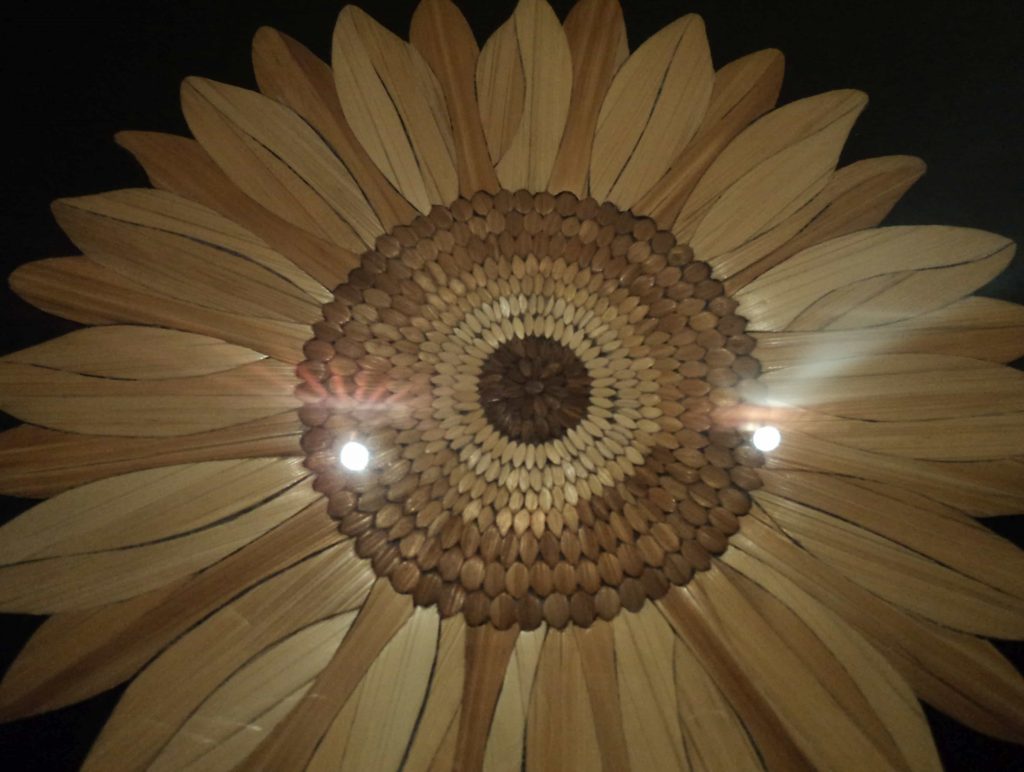 As an “anonymous” artist as he calls himself, he has never had an exhibition of his work until The Straw Shop and we are grateful to share his work beyond his country. 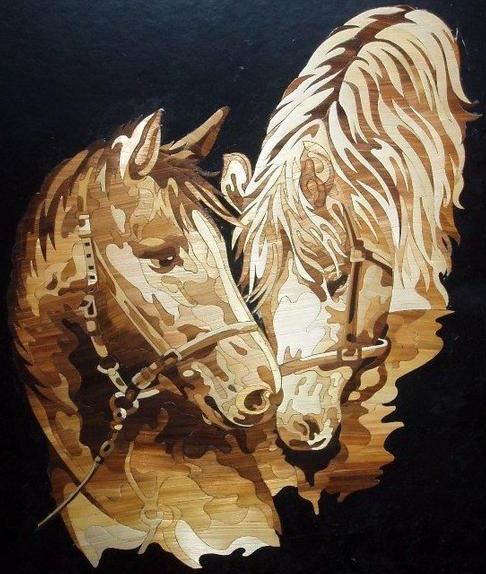 In the cherry tree Jasmin Mesarić 2018

In the next piece, entitled “Spring Morning” the artist has created interesting vignettes throughout this work created in 2019. 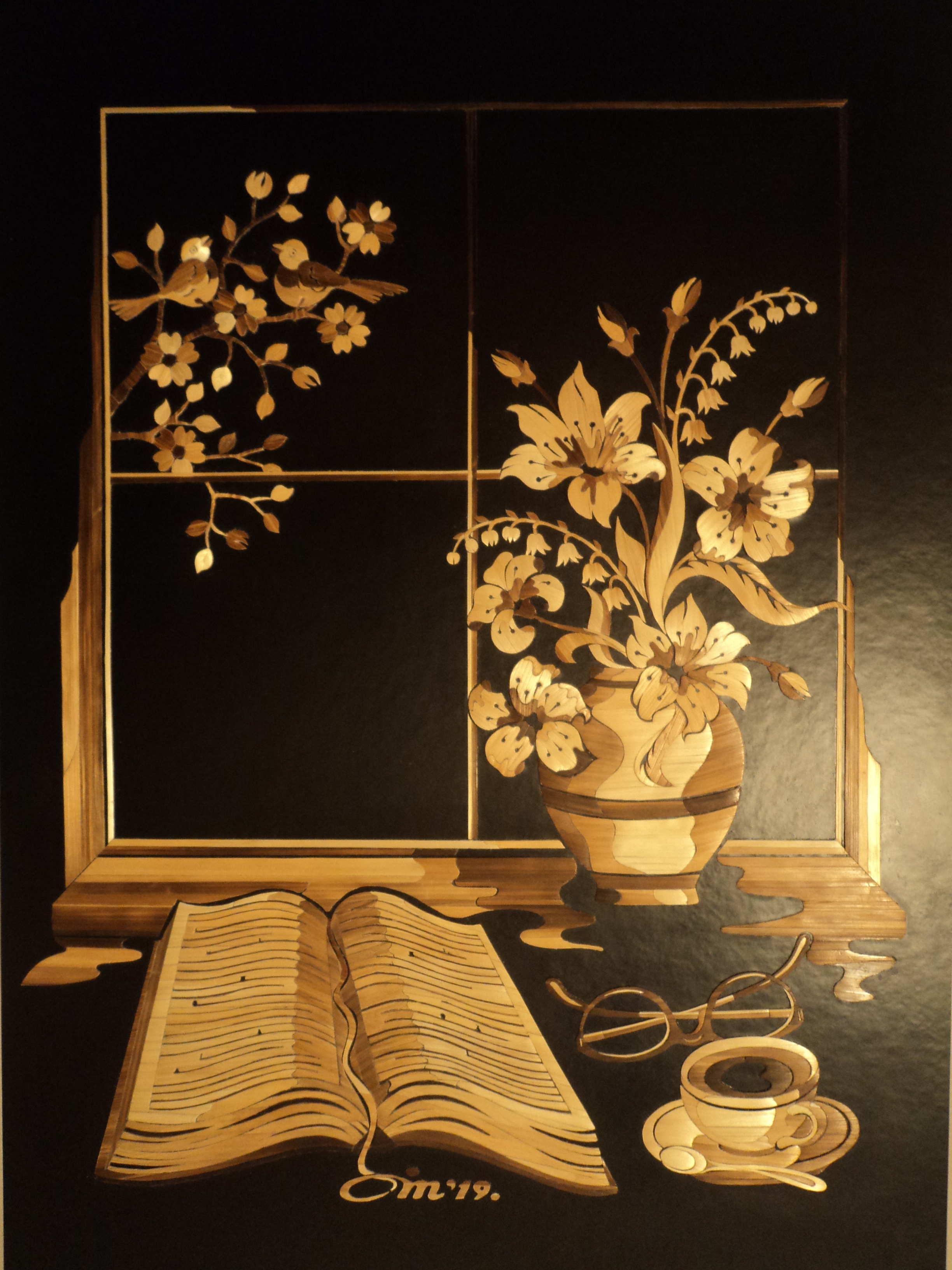 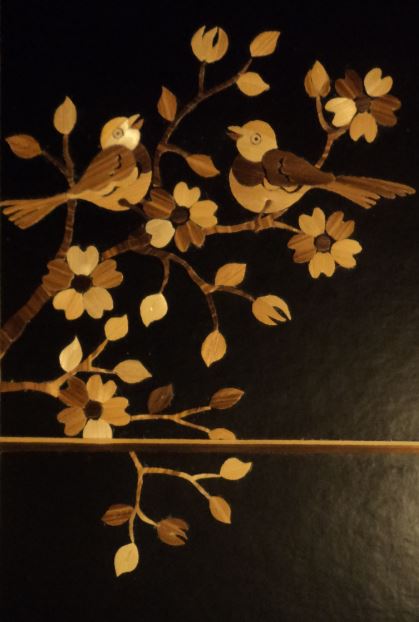 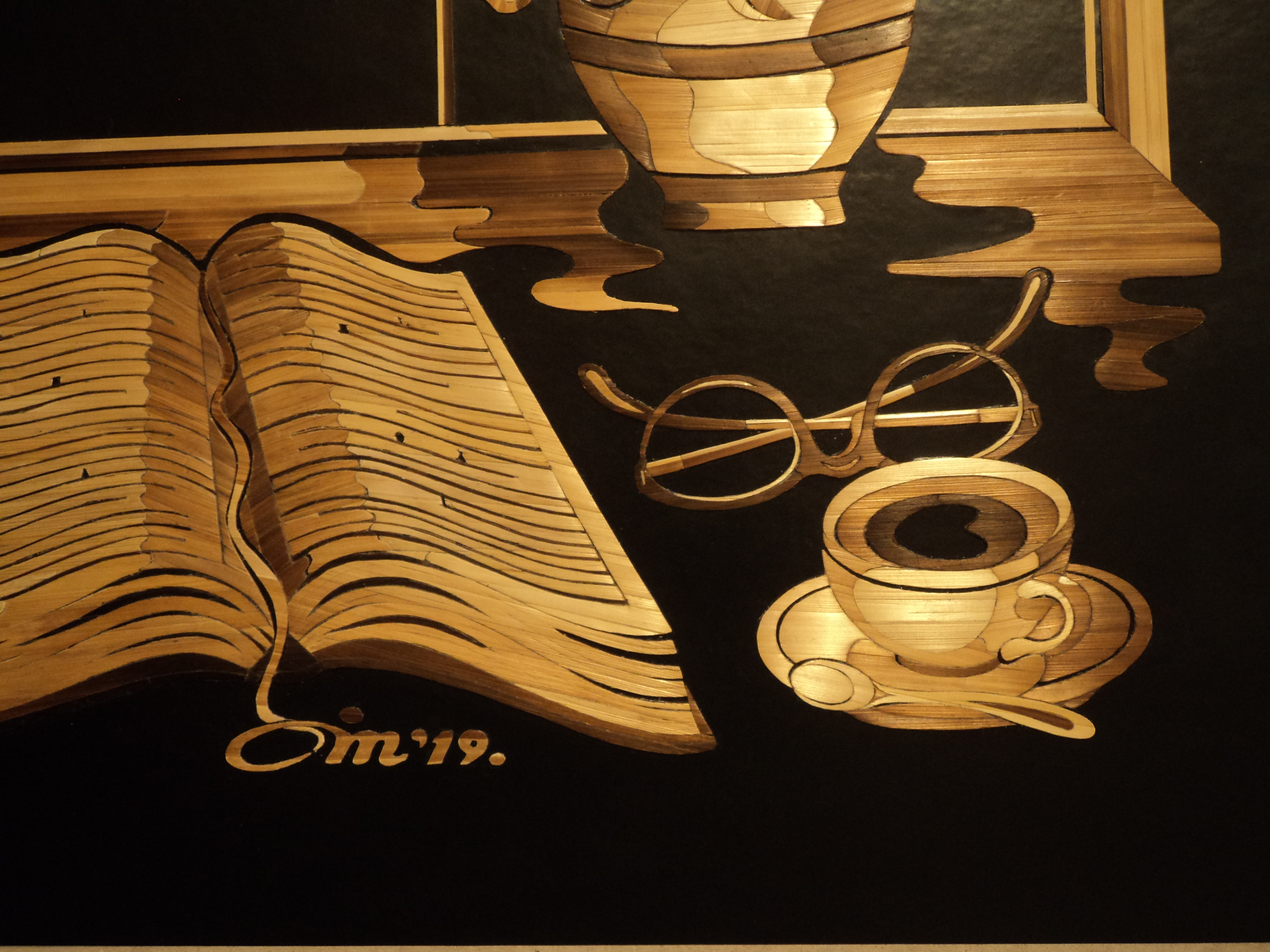 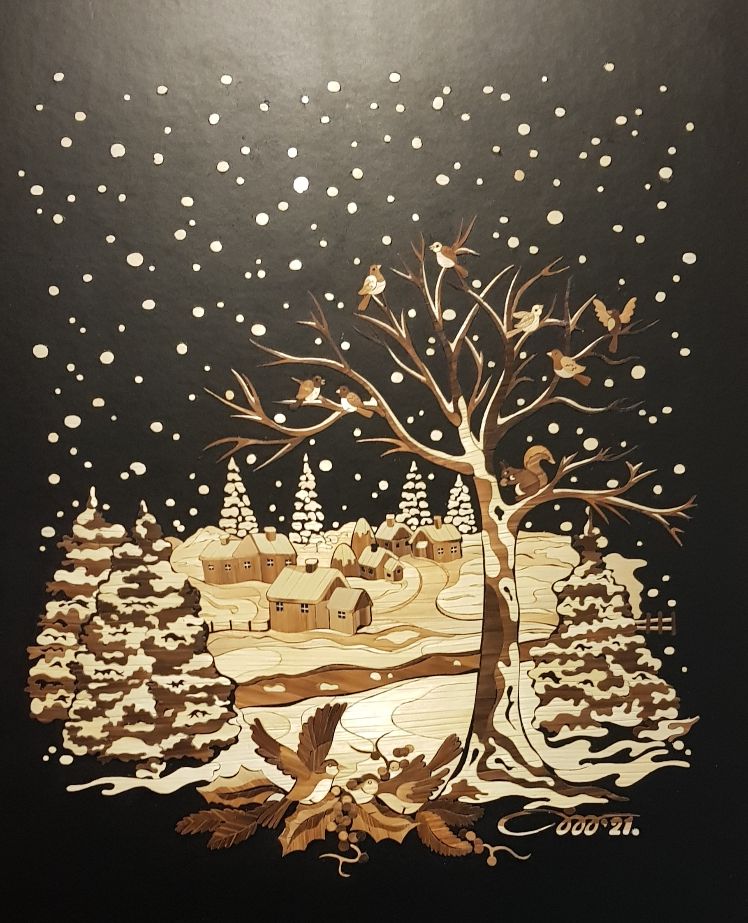 Jasmin takes us deeper into his work by sharing detailed images of two  of his creations.  The First is Heart of Mother of God he created in 2003. 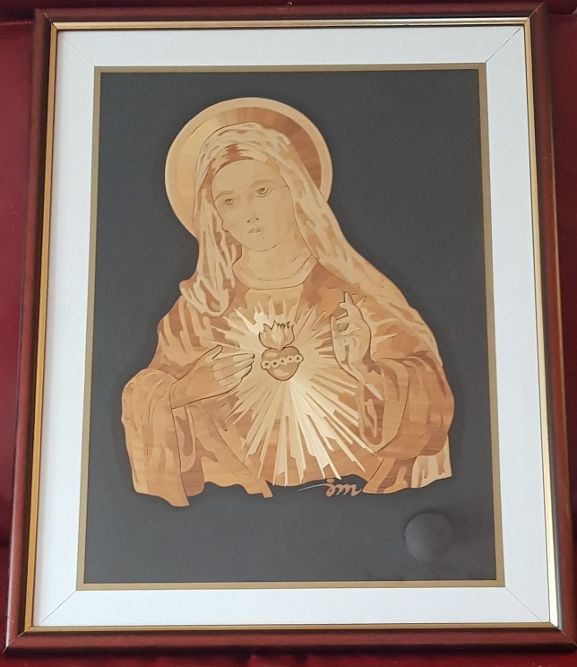 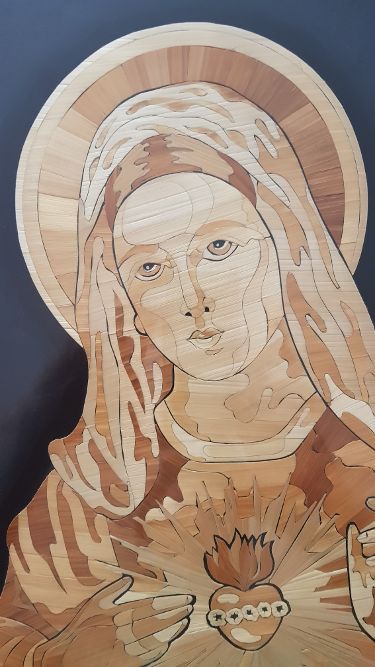 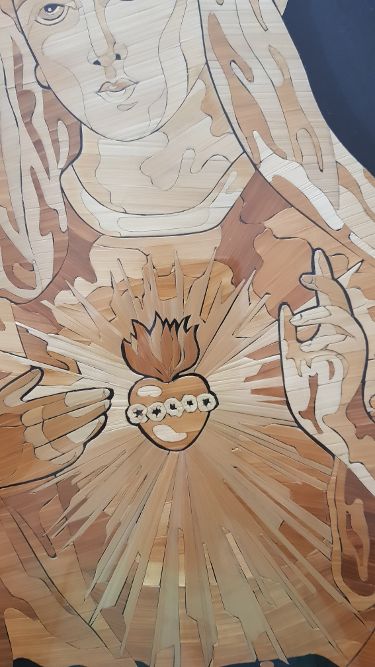 The piece work is so time consuming and exact. The hours and skill required are only those of an artist.

The next piece is entitled, Heart of Jesus, created in 2006. 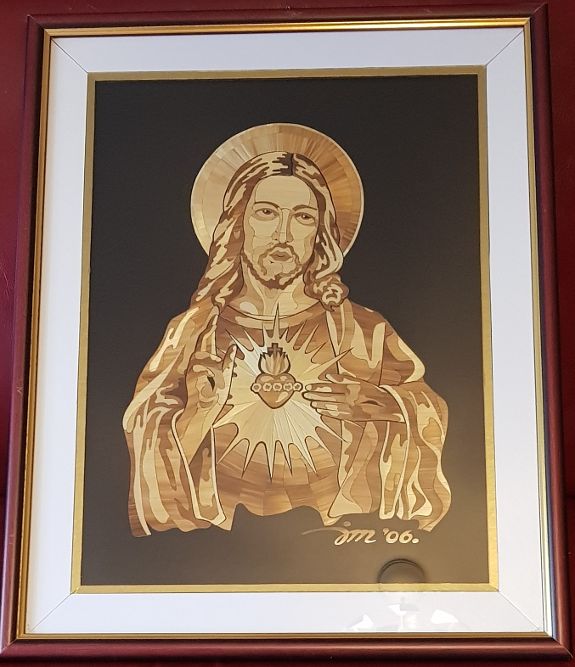 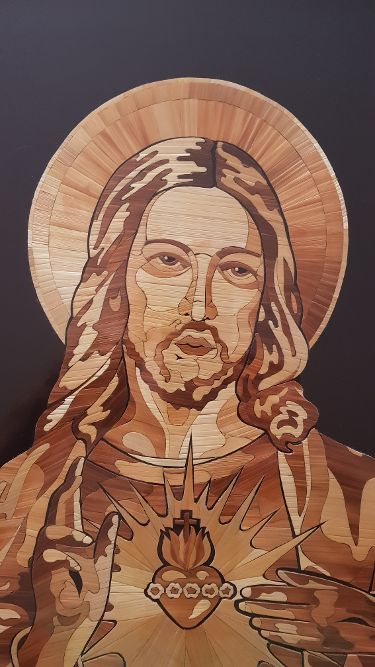 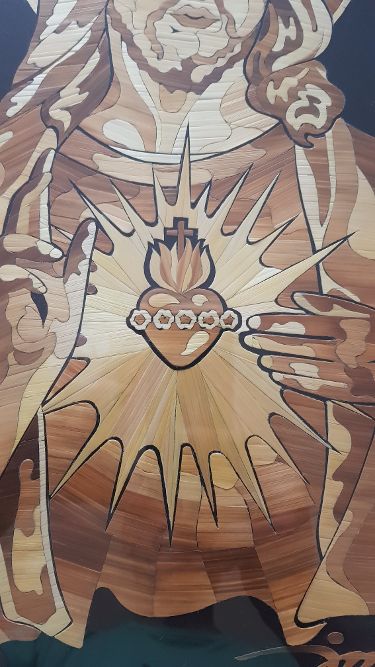 Again  detailed images show the selected straws for their shades. Jasmin uses only natural straw colors in his work.

We are fortunate to be able to show the below gallery of images to you. The below is the creation by Jasmin of a flower from beginning to end.  The process for this one flower was approximately 7 hours. 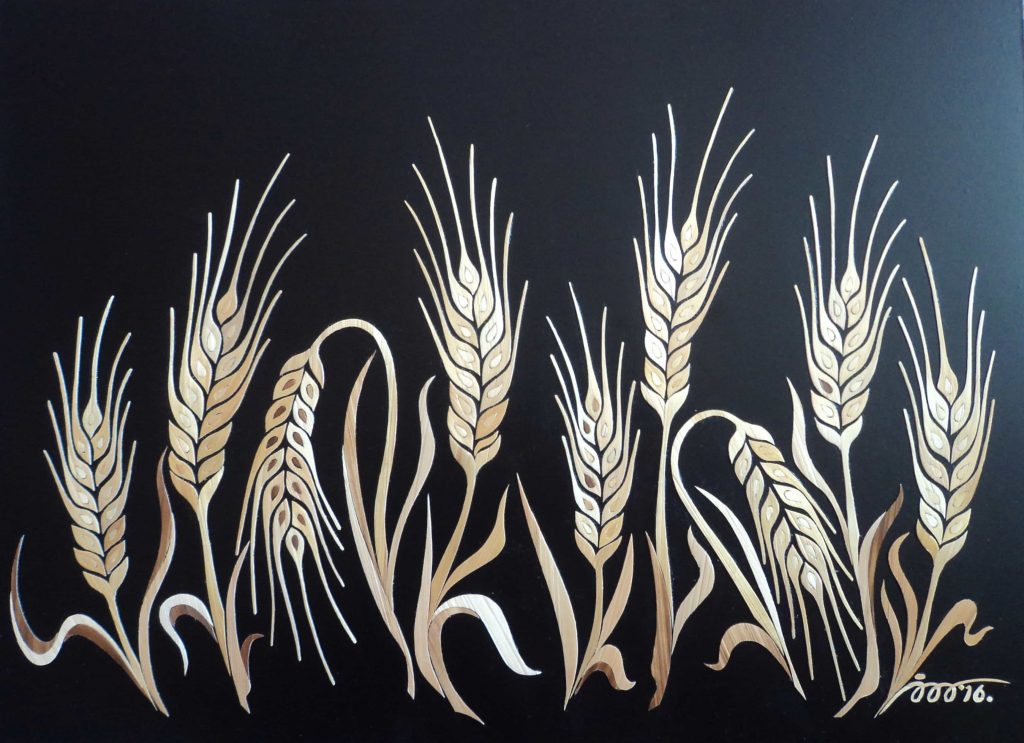 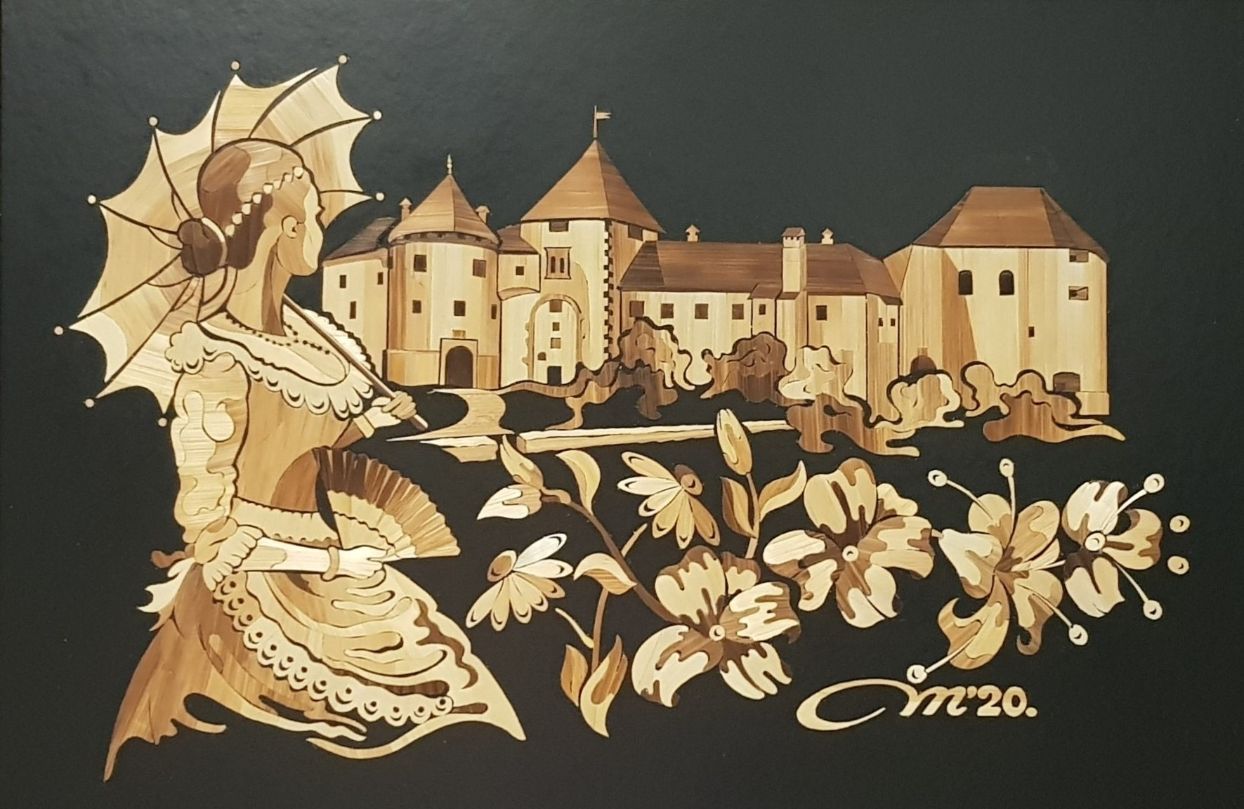 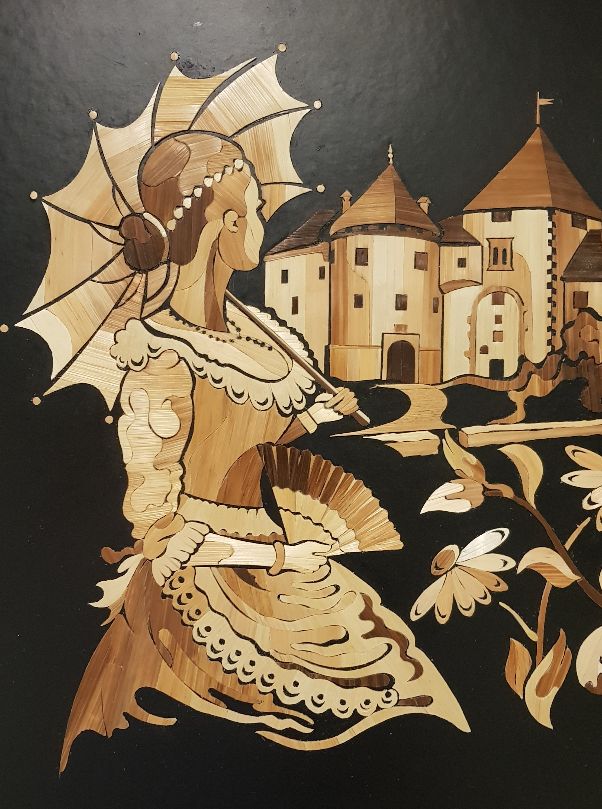 The Straw Shop is proud to present additional examples of this artist’s work; The Fishing Boat, created in 2021. 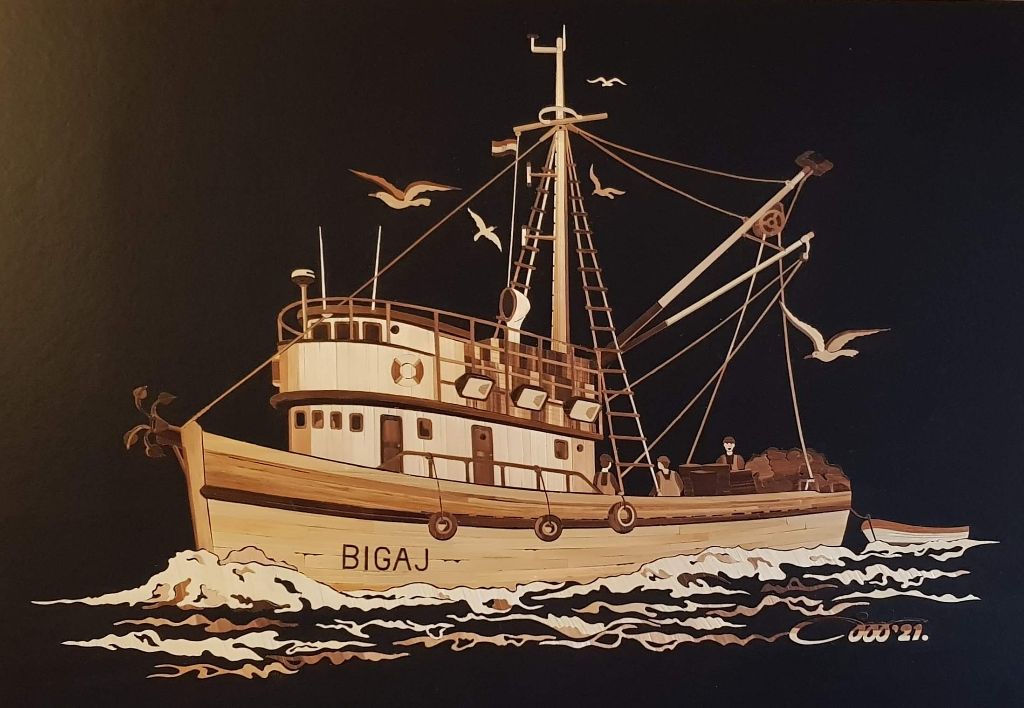 In 2022 another image displaying movement appeared in the form of The Old Mill: 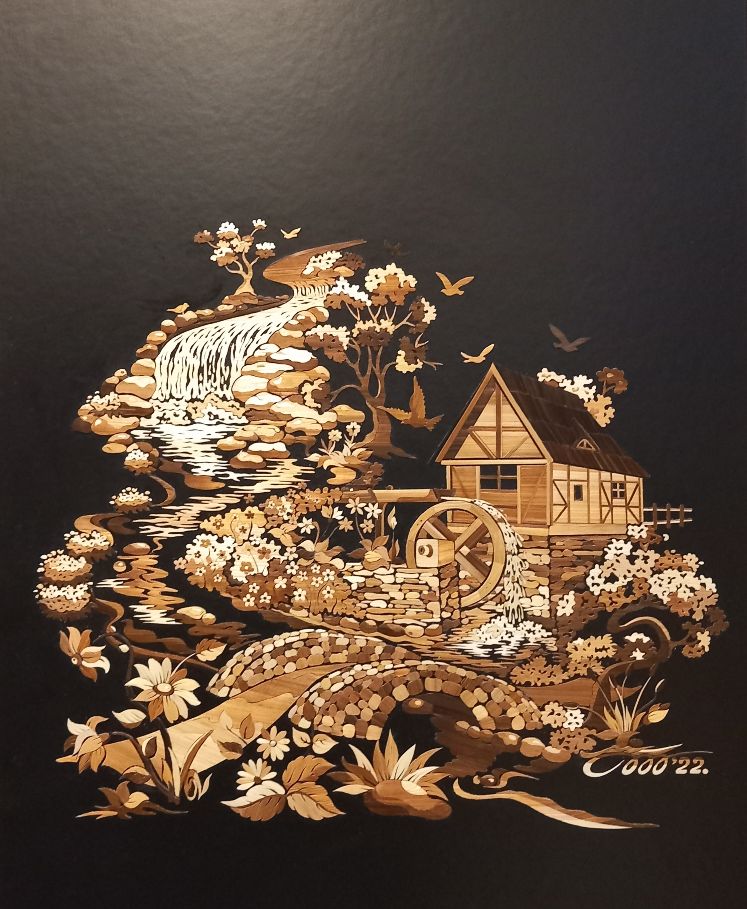 Should you be in Varazdin, Croatia, The Straw Shop encourages you to seek him out.  Jasmin Mesaric is an anonymous artist no longer!