The Straw Shop would like to introduce a style of straw work seldom seen. The style is called embossed, or raised, straw work, and is fairly specific to the 18th century.

Unlike other styles of straw work, this work required molds to be created in order for the design to stand out in relief.  A dampened sheet of straw was inserted into two negative molds, originally carved of horn.

The molds, which then pressed positive dies in low relief, allowed repetitive production. There are many identical copies of embossed straw still in existence.  Examples of bone molds may be found in the Victoria and Albert Museum and the British Museum in London.  The embossed work typically pictured religious scenes, royal portraits, bouquets and domestic scenes.

Notice the use of straw inlay in the below designs. The designs further show the incorporation of embossed straw which dramatically changes the appearance of the otherwise one dimensional work entirely.

Paper was added to help support the raised straw work. The below two framed pieces are representative of this popular form of decorative straw work in the 1700s and early 1800s.  Although not part of The Straw Shop Collection, we are grateful the owner shared the two images below for educational purposes in 2013. 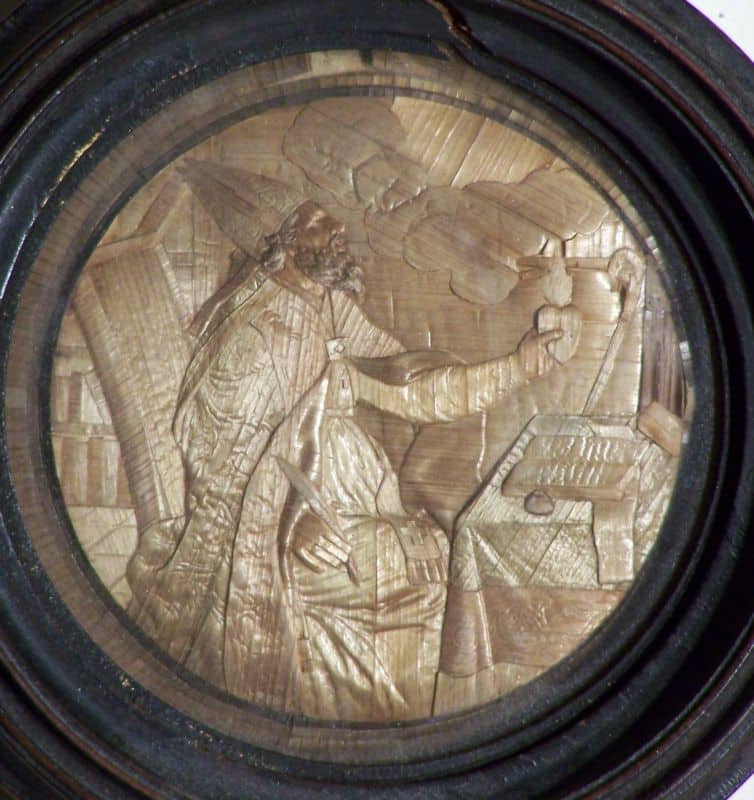 Embossed straw work is seldom seen due to its rarity.  The Straw Shop is pleased to share images of some with you. 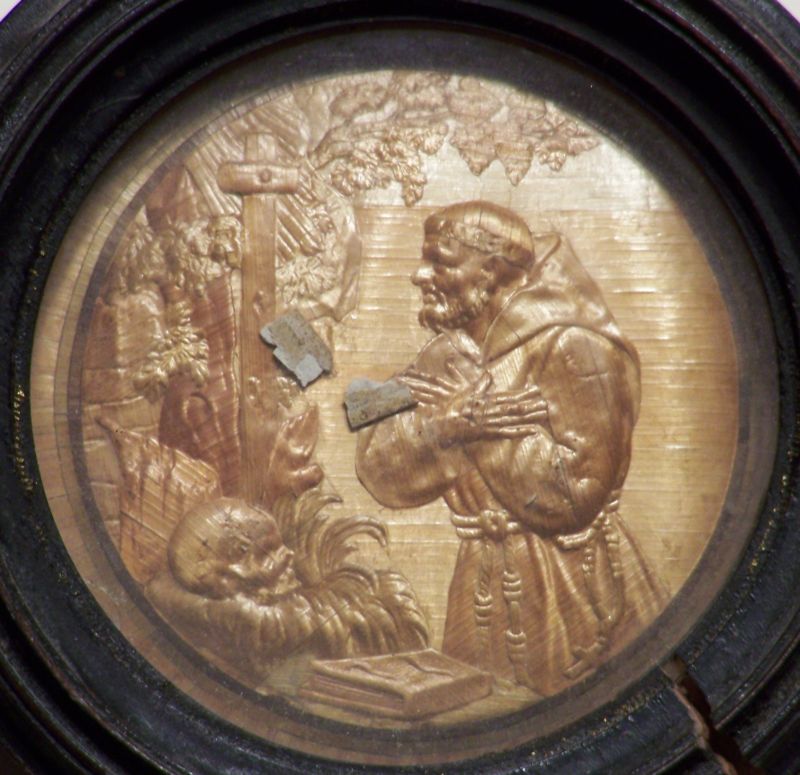 These images portray different religious icons although based on our research neither depict a specific saint.The last example has been described as a depiction of St Francis of Assisi.  This saint is often depicted with a crucifix, book and skull. To date we have not located any information to substantiate this claim.

The two examples above are found in small round wooden framed examples.

The next examples have been made larger in the form of a panel surrounding the embossed centerpiece.  As shown below, often the inlaid style of straw work, thought to be typical of the 1700s was employed. Also of interest, although faint in the below example, is the use of black ink to define designs. 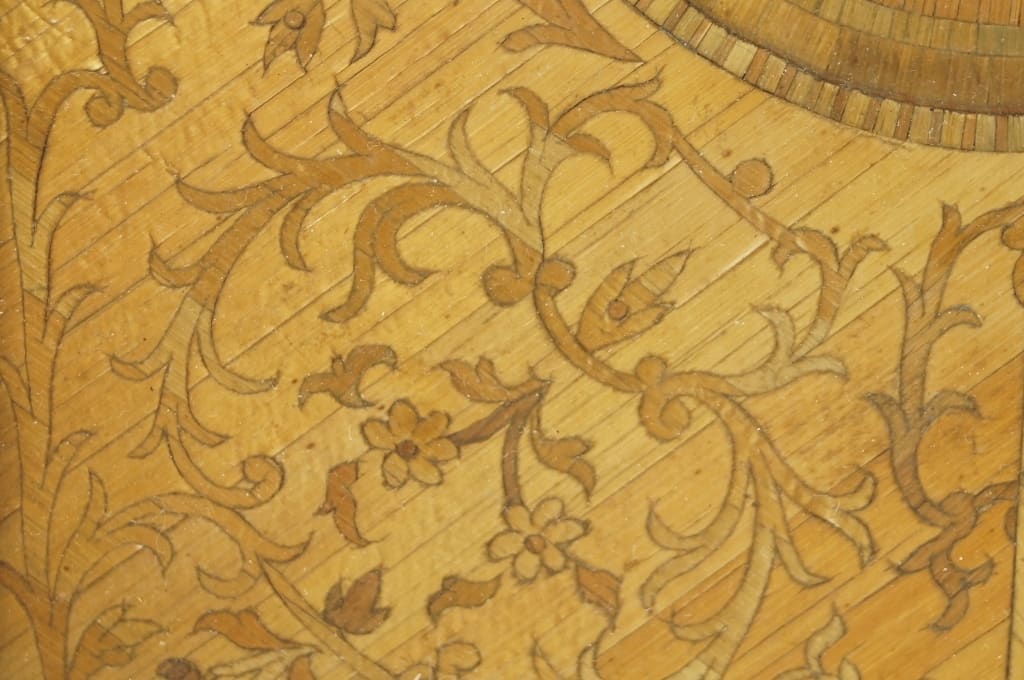 According to the seller,  “The central 3.25″ recessed plaque is of embossed straw work, thought to be produced in Le Puy, France.”

In France, Le Puy-en-Velay, a pilgrimage stopover and rye-growing region, seems to have been an important production center for straw marquetry with pious iconography. A great deal of straw work was produced by the convents and monasteries in the area.  In Le Puy-en-Velay, during the late 1700s and into the early 1800s, the craftsman Georges-Roland Morel practiced the relief decoration technique of straw embossing.

This example appears to have produced from the same mold as the second example shown above. 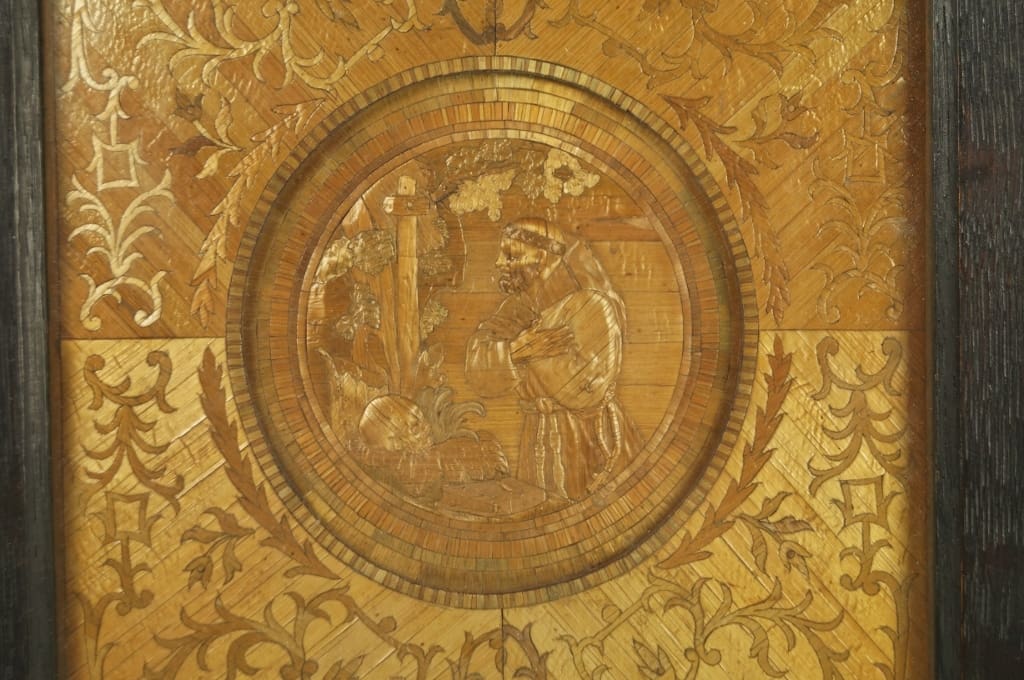 Here is a detail of the center portion: 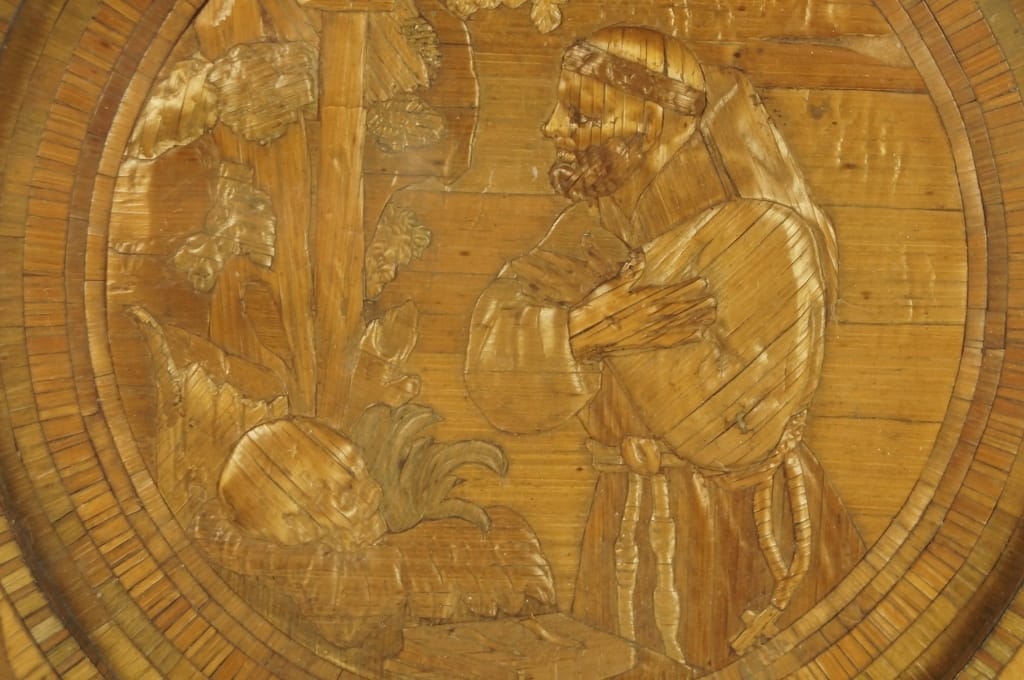 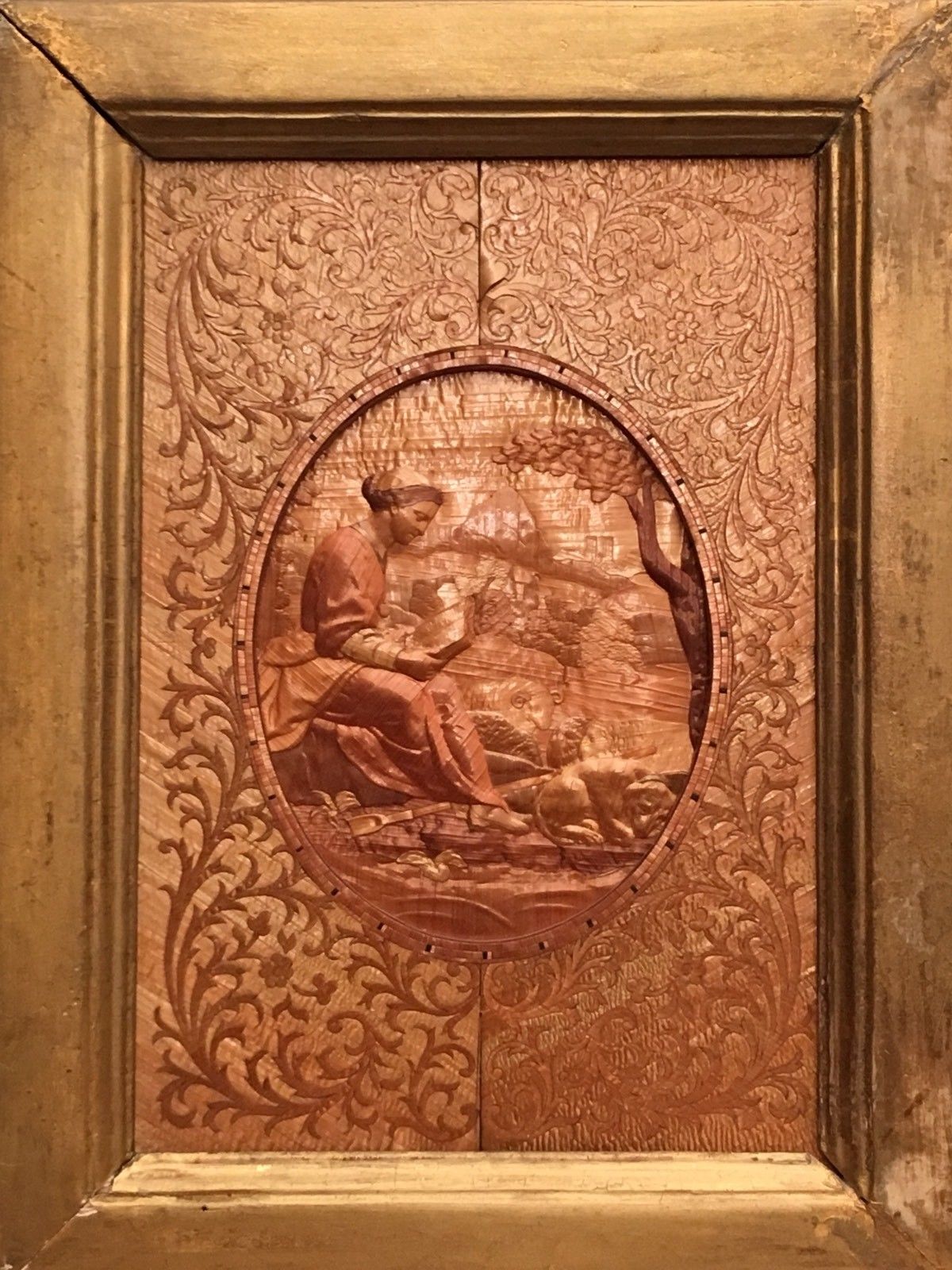 Panel of shepherdess from the Collection of Lison De Caunes, Courtesy Ebay.fr 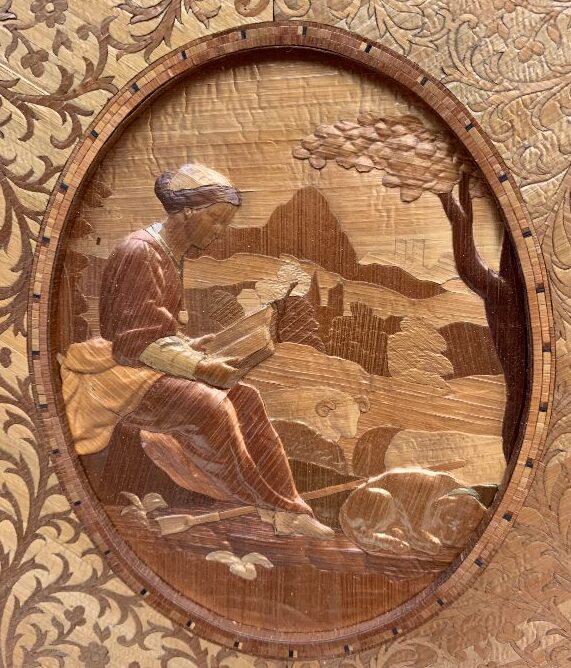 The next example may be representative of a domestic scene. What is extraordinary about this piece is the retention of color: 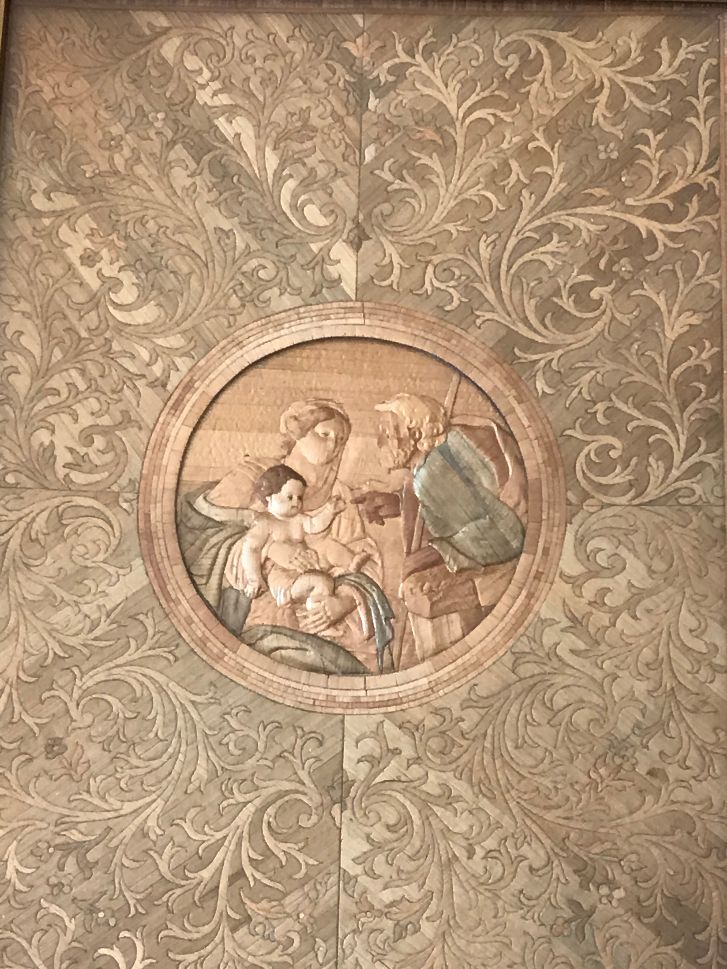 Upon closer examination the insertion of colored straw into the original mold is evident. . 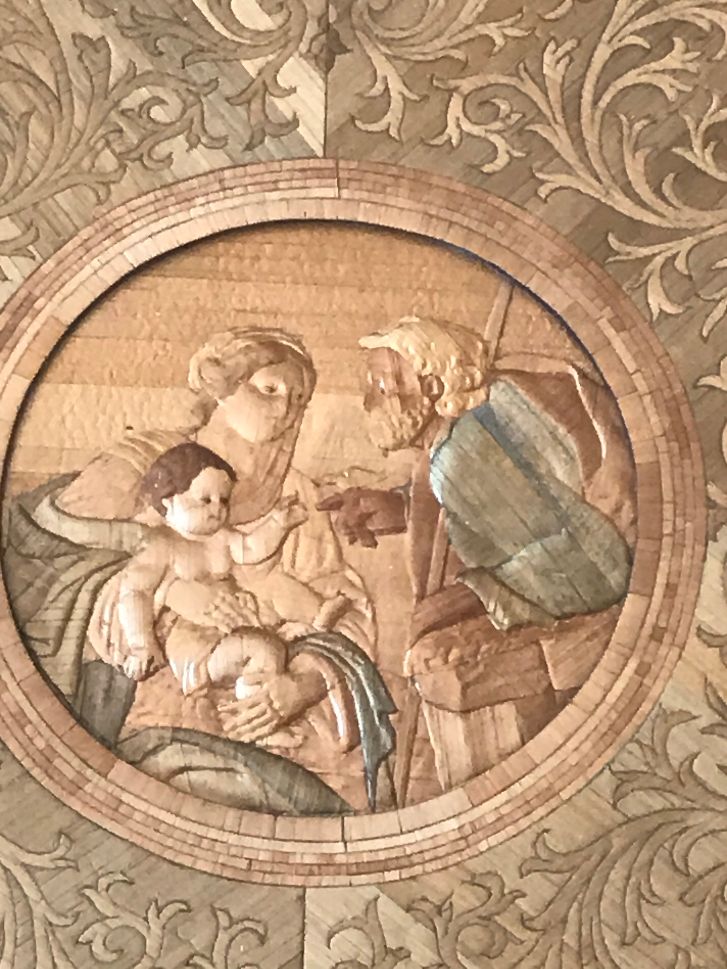 In the 1998 article, entitled, “Horn, Medals and Straw” by Ad’le Schaverien, she instructs in part, ” Embossing straw is extremely complex, and was done with horn moulds. How the straw was embossed is not fully understood. The method of manufacture of the moulds is also uncertain.  Similar designs were produced in different places, which leads one to conclude that several moulds with the same design were widely available.”  Or does the number of similar designs found reflect the mass production of the pieces?

Notice the similarity of the inlaid straw background designs in many of the pieces shown thus far. Inlaid straw in this style was quite popular in the eighteenth century. Examples of similar work is found on the outer sides of boxes described as Napoleonic era straw work support the inlaid straw technique’s popularity and use.

The next example is especially interesting due to the background element of colored straw flowers and leaves. The black ink inclusion to further define elements, such as leaves or petals, was a common decorative straw practice in the 1700s, as mentioned earlier and is corroborated by other straw pieces from the18th Century. 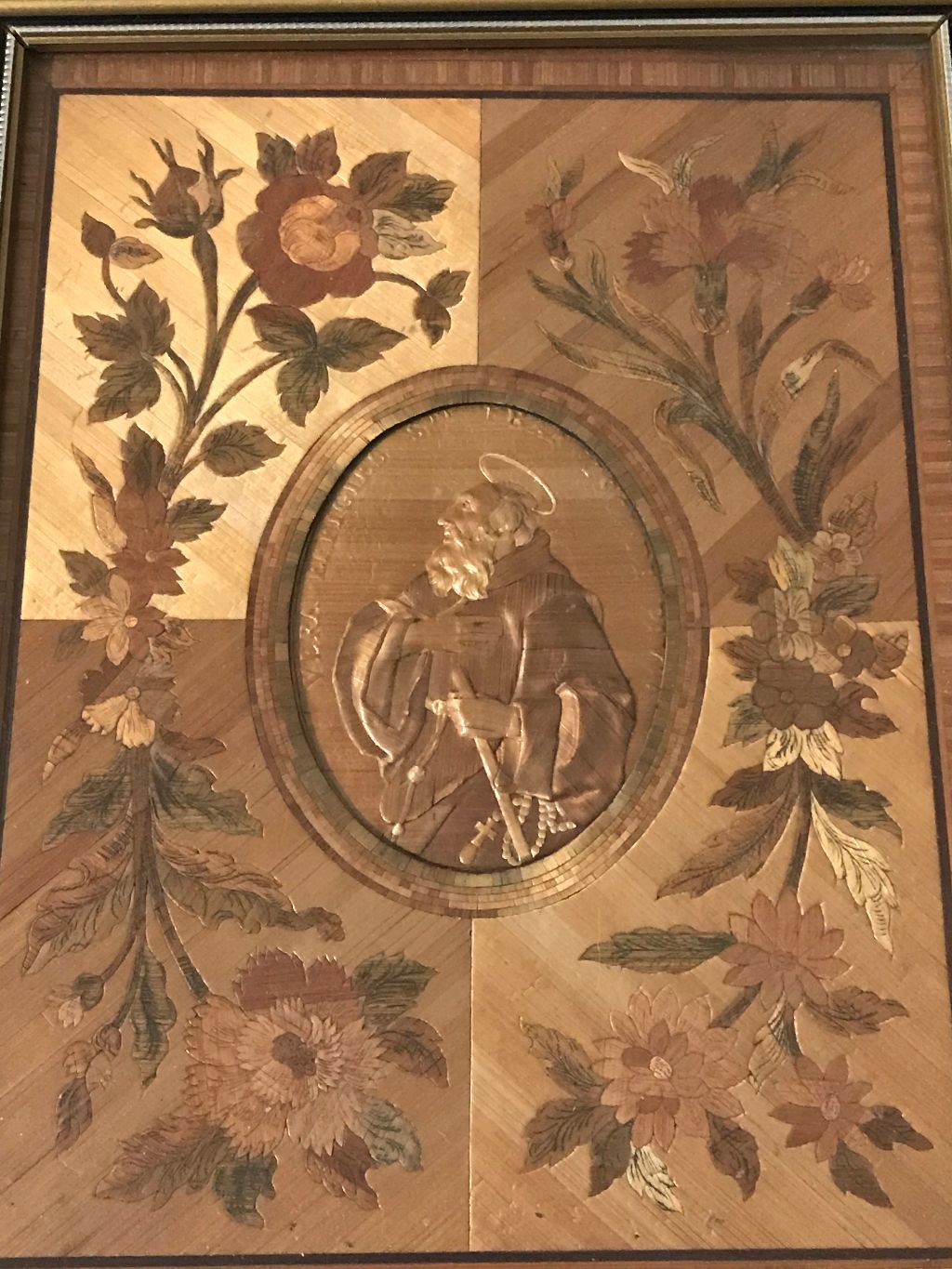 The center of the panel is the embossed figure of St. Francis of Paola, the Patron Saint to Sailors. 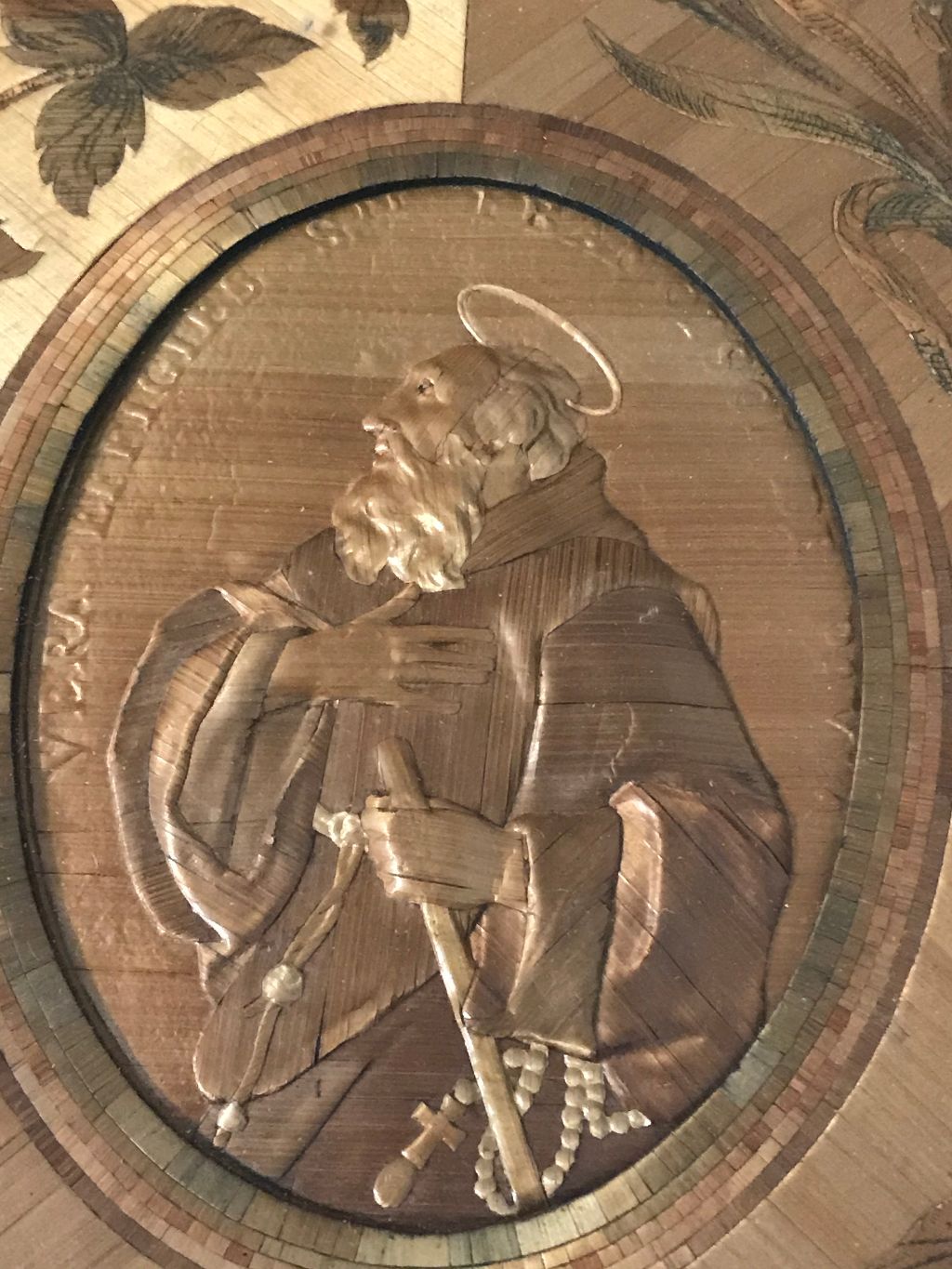 Identifying the subject matter specifically in the above piece, only indicates it was created some time after St. Francis of Paolo was canonized in 1519.

The next piece may be an example of embossed straw style changing. Every example presented thus far features the embossed work in the center of the panels only. The next example is the opposite.

The background, in addition to the central figure, is what is primarily embossed. The embossed portrait of a gentleman is another example of a piece likely produced in a series. The use of embossed straw in the background became a new straw design element. 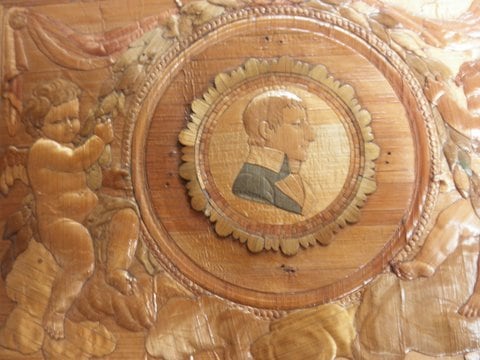 Extending the practice of embossed straw from one century early into another this example is the interior piece of what is described as a toilet box. Described as dating between 1804 and 1814. This dating is likely based on Napoleon Bonaparte crowning himself as Emperor of France in 1804 and ruling until his exile in 1815.   What makes this so interesting is embossed straw work is found throughout the piece. From The Metropolitan Museum of Art, New York, Accession Number 30.64: 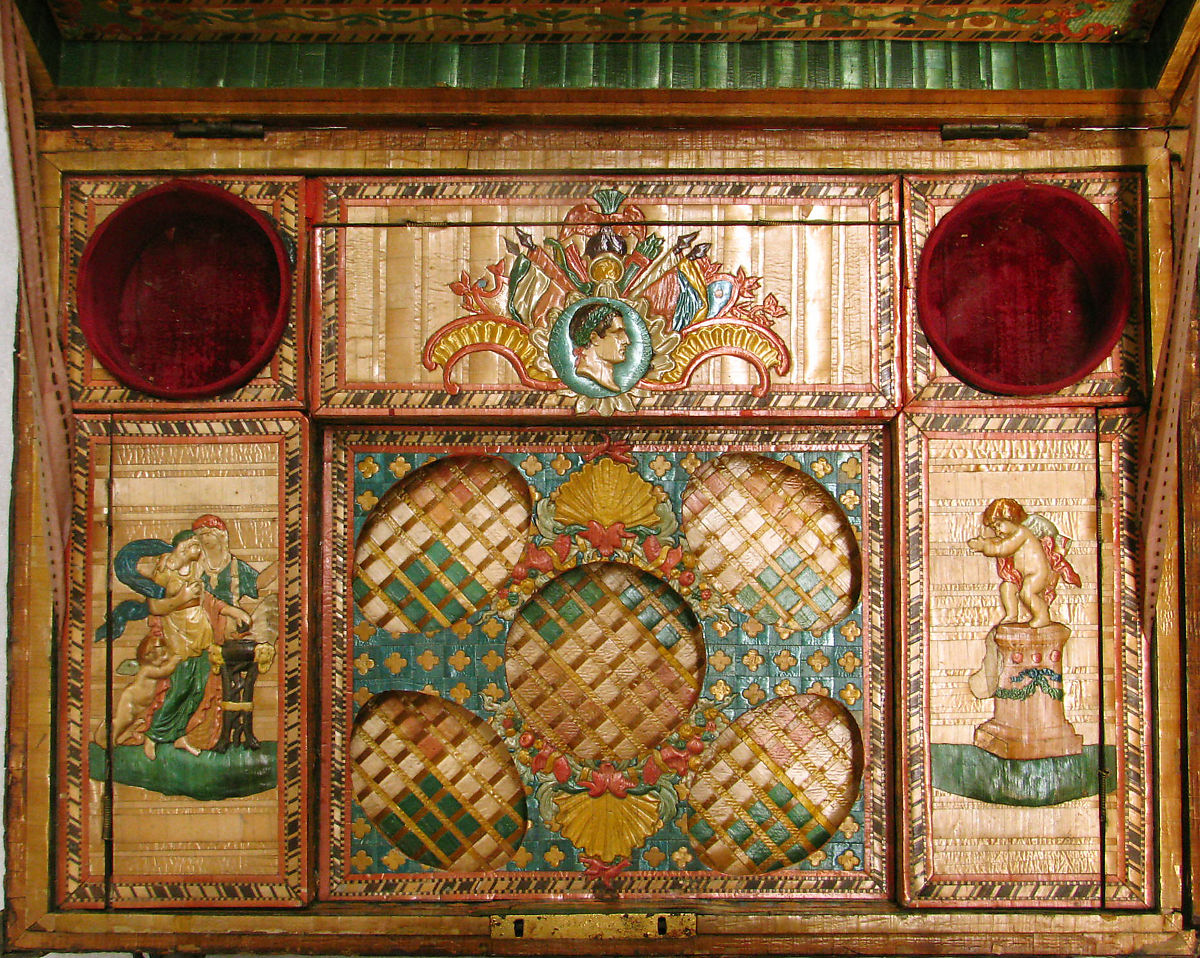 This heavily embossed box not only had images of people, plants, fruit in relief on various pieces, but the likeness of Napoleon Bonaparte. According to an exhibition held in 1978 by Metropolitan Museum of Art in New York, entitled “The Arts Under Napoleon”, we learn once he crowned himself Emperor he motivated craftsmen from all areas to portray his likeness on everything. His image, as a reborn Caesar complete with a laurel leaf crown, was used in medals, portraits sent to other dignitaries, souvenirs and other items such as this toilet box.   Apparently Napoleon did not care to pose often for the various pieces ultimately portraying him.   As a result his likeness varied. The likeness portrayed on this piece is said to have been a “Profile head of Napoleon after an original by Jean-Pierre Droz (French, La Chaux-de-Fonds, Neuchâtel 1746–1823 Paris)” according to The Metropolitan Museum of Art, New York.

The two images below show the embossed panels surrounding the center of the box. 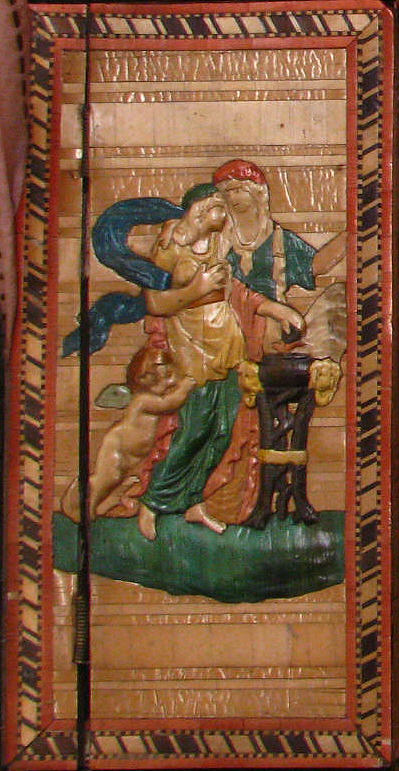 The following images show the extensive use of embossed straw in this piece. Six of the original seven boxes once nestled in the center of this piece are shown below. 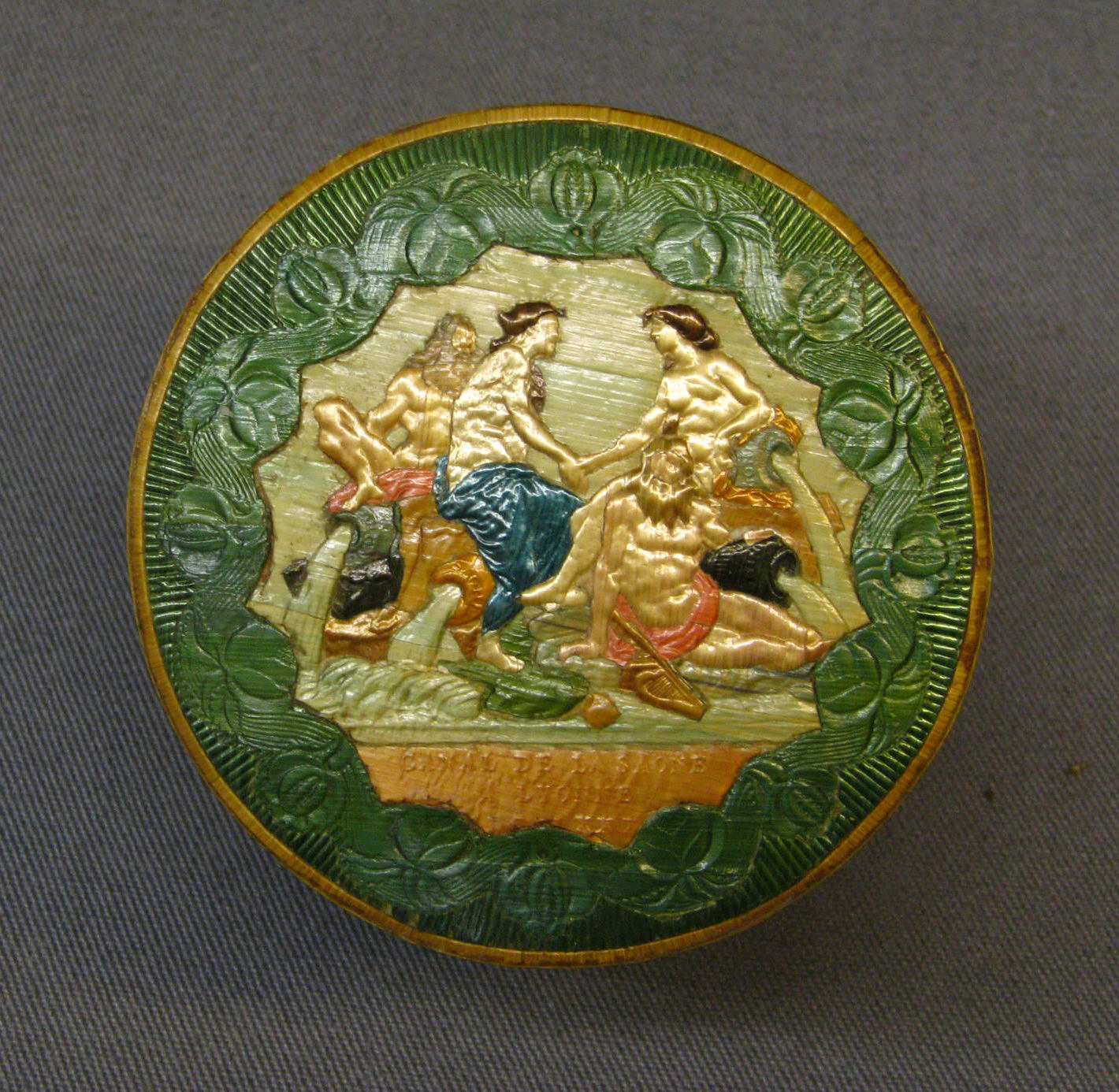 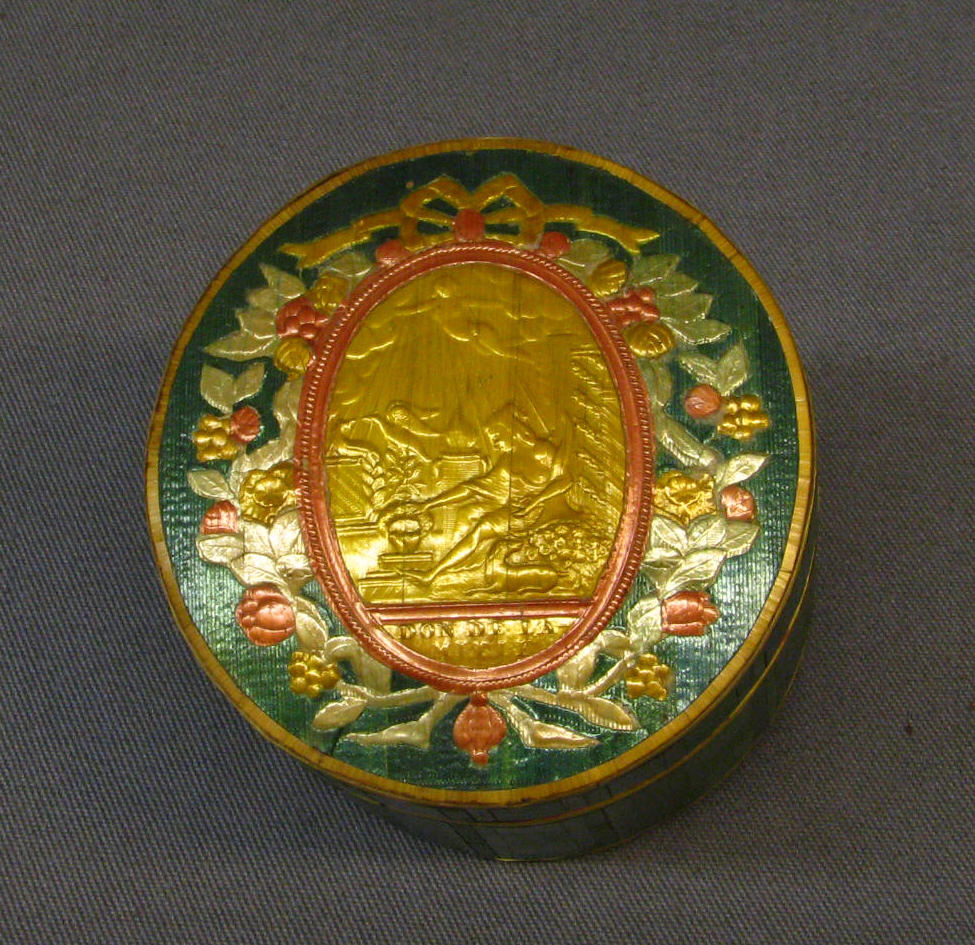 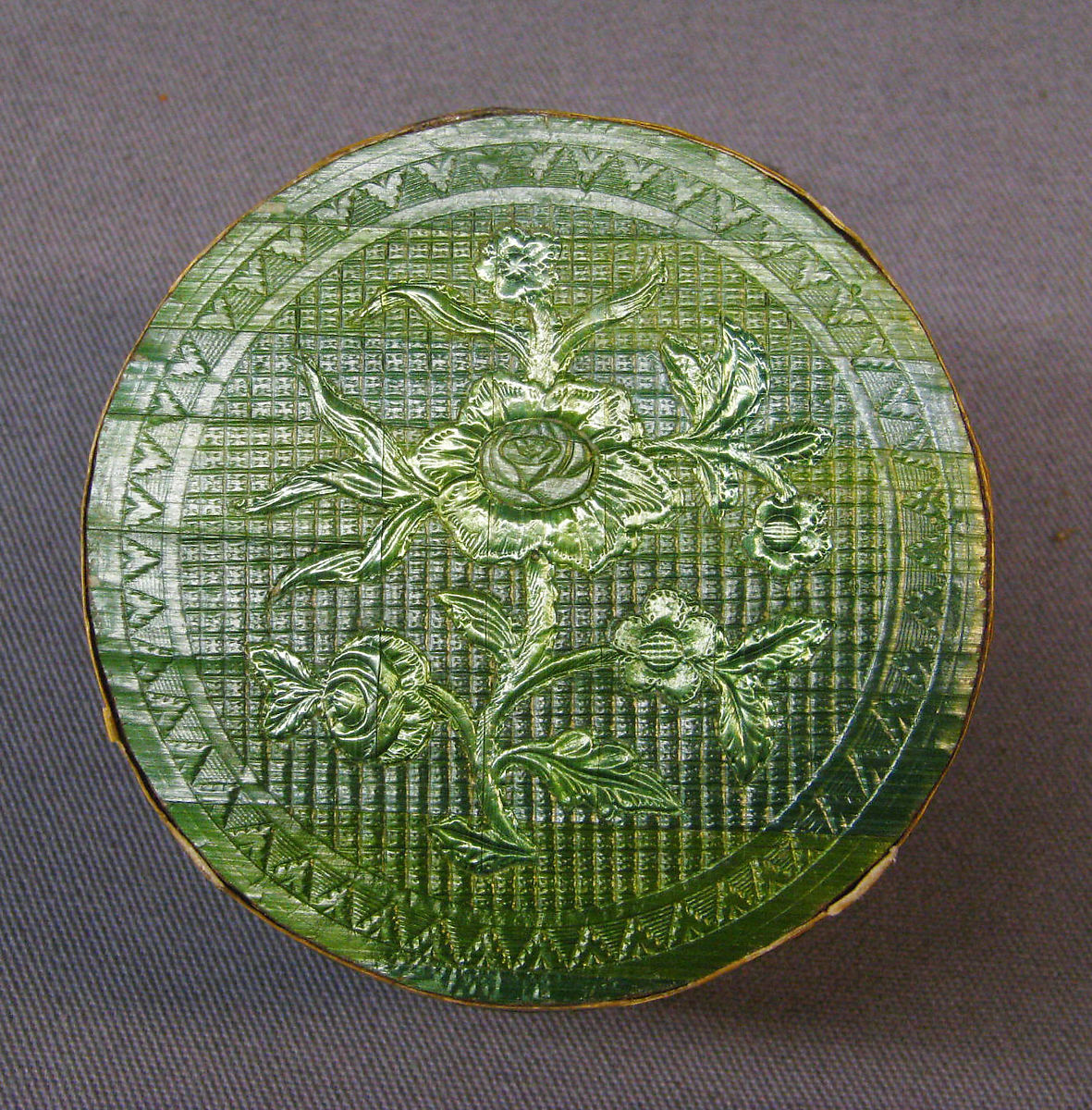 It is possible the green box shown above is simply the base side of another container as the complete image shows only six boxes in total. 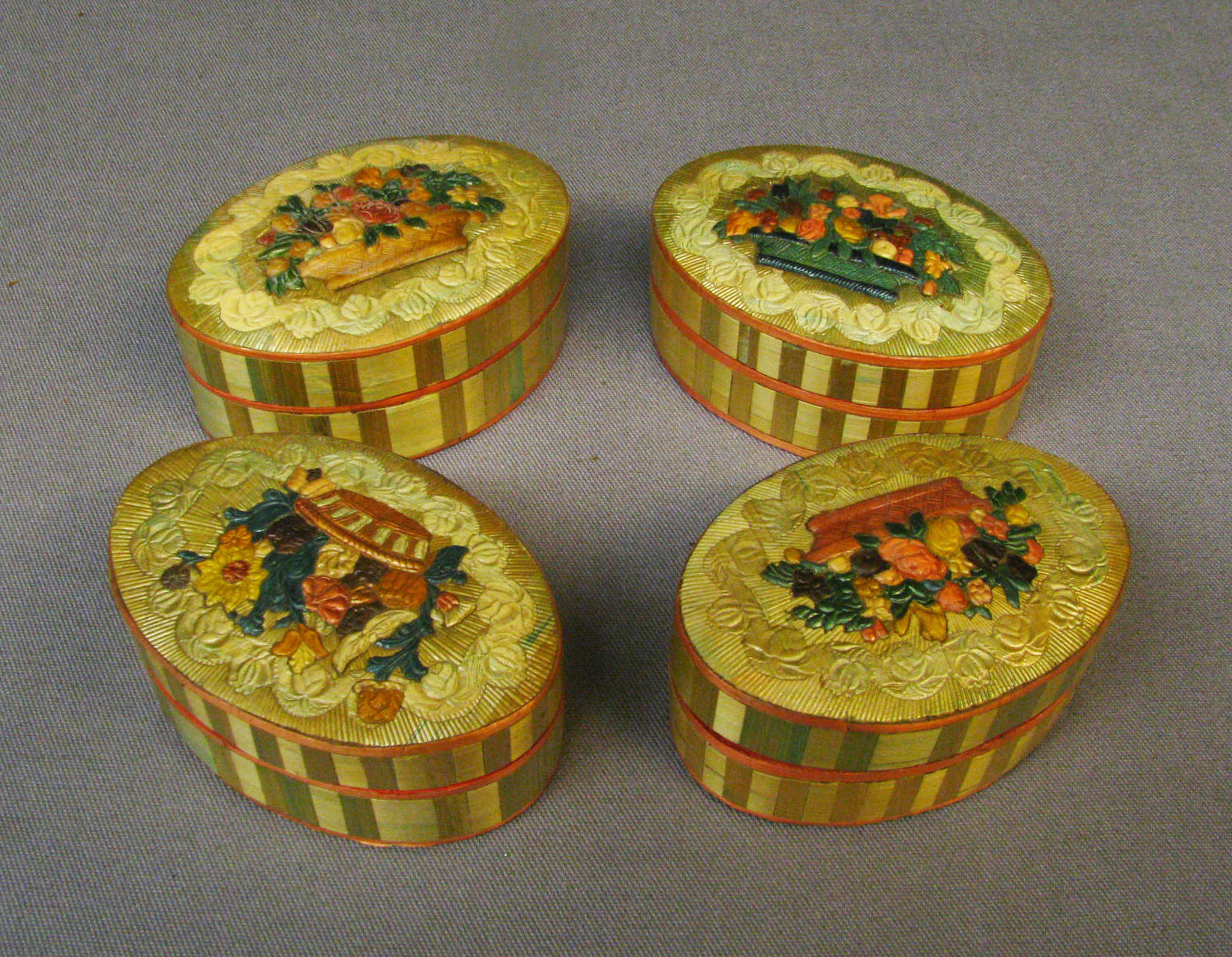 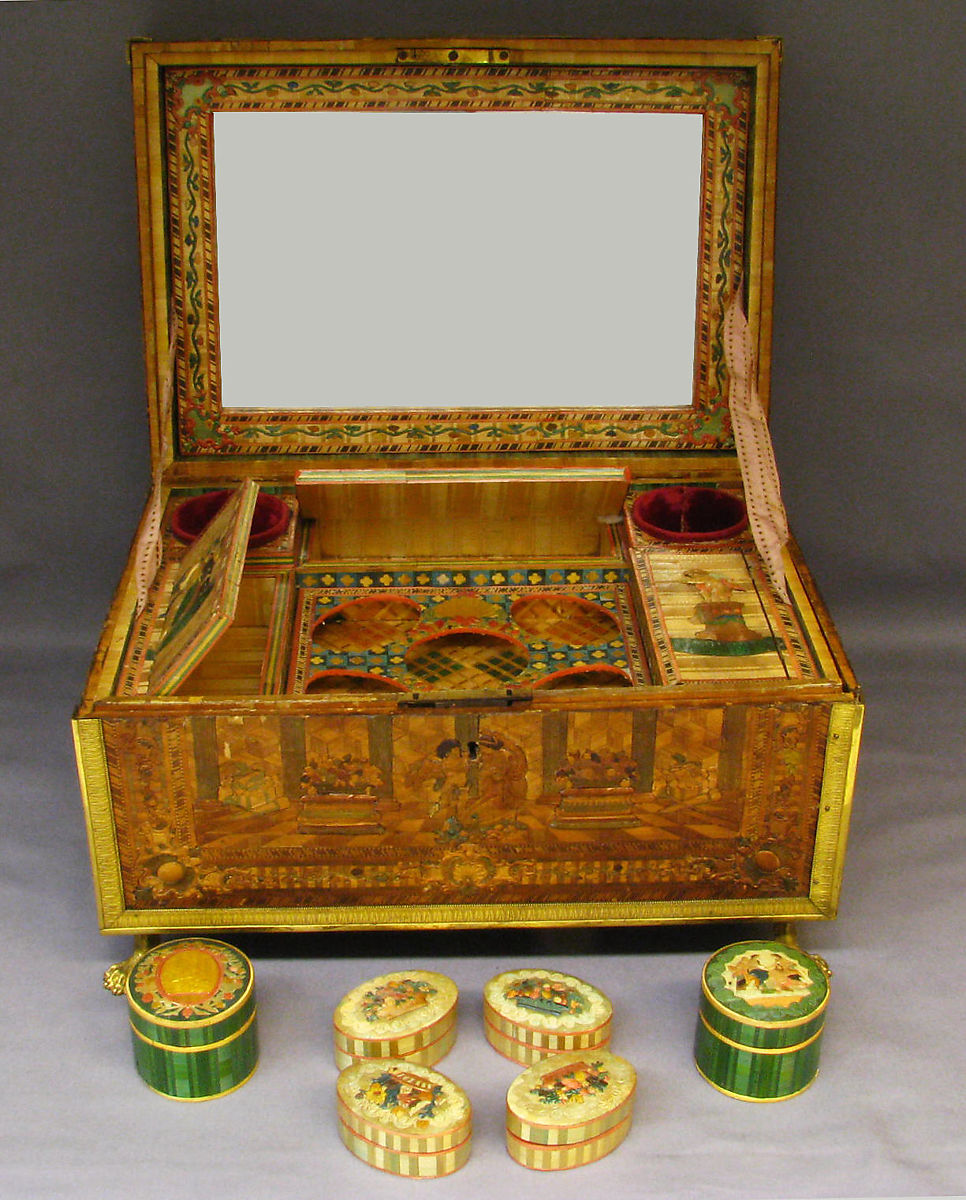 The art of embossed straw work was just that- a highly skilled art form to execute.  This predominantly 18th century of straw work is no longer produced as the skill has been lost over the centuries. The Straw Shop will add more examples of this extraordinary straw work as we discover them.

As always, The Straw Shop welcomes additional information on this subject.

The Straw Shop is indebted to Metropolitan Museum of Art NY,  Ebay, The Straw Shop Collection and the generous individual who supplied the anonymous images for this article.