Do You Know Yeddo?

Men and hats. A fashion pairing for hundreds of years. Many of us have heard about the popularity of straw hats at one time or another such as the 1920’s and 1930’s. When men’s straw hats come to mind, rye straw is not the straw material first thought of. You might think of a straw boater, or a skimmer, or a hat worn by a member of a barbershop quartet. 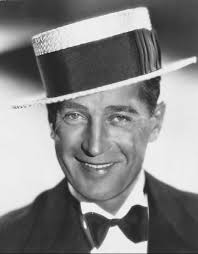 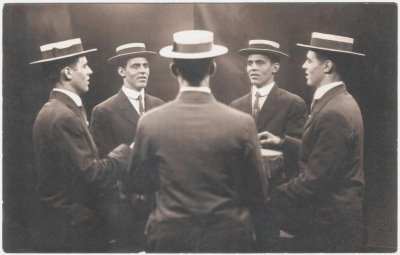 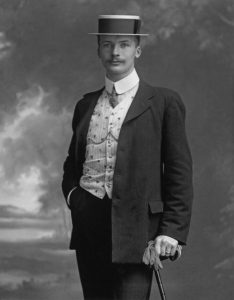 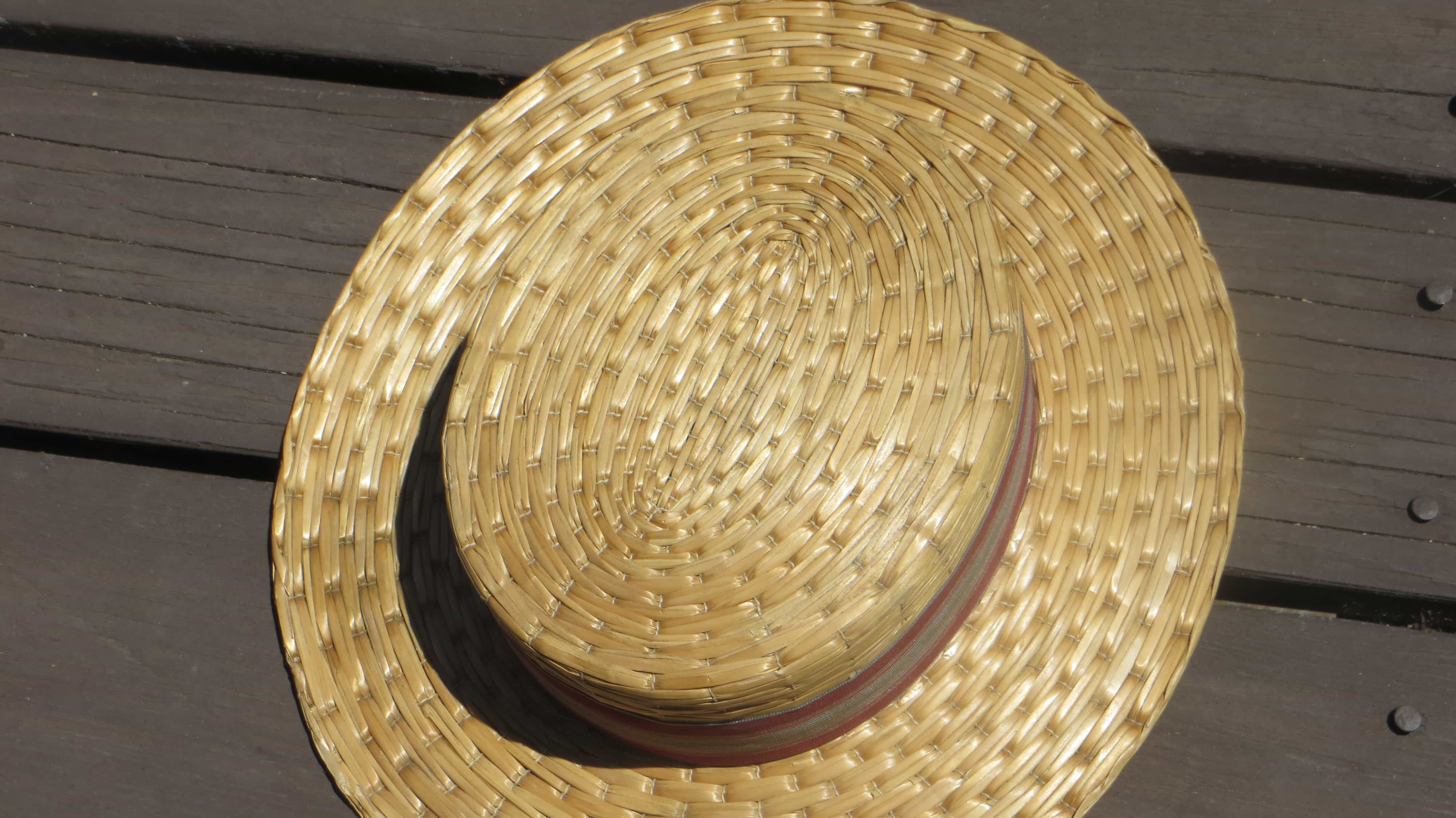 Look at the above photo closely and notice the hat is not straw plait (braid) that has been sewn together, but rather straw that is tied together.  All the other hats shown above the knotted boater are plaited and sewn. This style of knotted/tied hat has been made in various countries around the world.

For example, a  bathing hat made in the 1400s using this method originates from the Philippines. (The hat is supposed to be in the Ambraser Collection at the Kunsthistorischen Museum, Vienna).  Another resource, a booklet (Bruggisser Centenary booklet 1812-1912) says that they were made on the Italian island of Ischia, (off the Bay of Naples) from where they were brought  to Switzerland in the 1700s.  The aforementioned booklet says they were popular and a large trade item particularly from 1892-1903, after which time production decreased. In Switzerland, knotted hats are called Röhrlihut. For export purposes , the knotted hats style was called “Yeddo” in English by the Swiss and Italian makers.  Described on the bands or label as “Genuine Yeddo”.

Why Yeddo?   We simply do knot know why.

See the below  gallery of examples of this fine straw art work generally overlooked and unappreciated for their craftsmanship in our opinion. 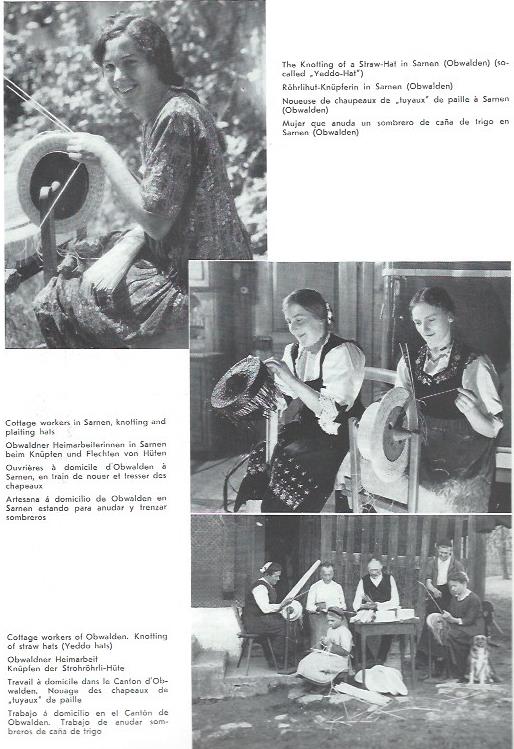 By the end of the 1930s  Yeddo straw hats had fallen out of style and as fashion dictates, hats were produced of other materials.

Though no longer mass produced in either Switzerland or Italy the technique is still produced in Spain, principally for children’s hats. Interestingly, Yeddo hats were made for everyone-men, women and children.

Once the hats were exported, various hat companies would decorate some of the hats and/or  affix their own labels.  The hat to the below is an example of a later “decorated” hat. 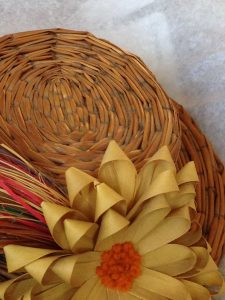 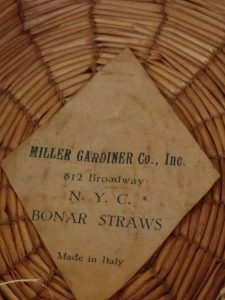 Interestingly the later attached flower and threads are mainly made of plant materials.  Sold  by the Miller Gardiner Company, New York City, the flower, made from a palm type plant was sewn onto the hat, a tassel of colored straw strands  finished the look.  The company also added a chin strap to this hat.

In our research, we further discovered yet another style of straw hat completely made by hand also identified as “Genuine Yeddo”.

“Genuine Yeddo” straw hats were also exported as plaited straw and knotted hats.  Beautifully plaited, not sewn, and with a knotted brim. Here are a few examples of  plaited  and knotted/tied Genuine Yeddo hats:

The crowns on the above hats are unlike any of the other “Genuine Yeddo”crown shapes.

All four hats above are  woven and knotted Italian hats labeled “Genuine Yeddo” just as the completely tied whole straw hats the Italians produced.  We believe the plaited and woven  “Genuine Yeddo” hats were made only by the Italians. Recently discovering yet another plant woven hat called “Genuine Yeddo.”  Look at the construction- the brim is certainly knotted but the balance of the hat has no visible ties. 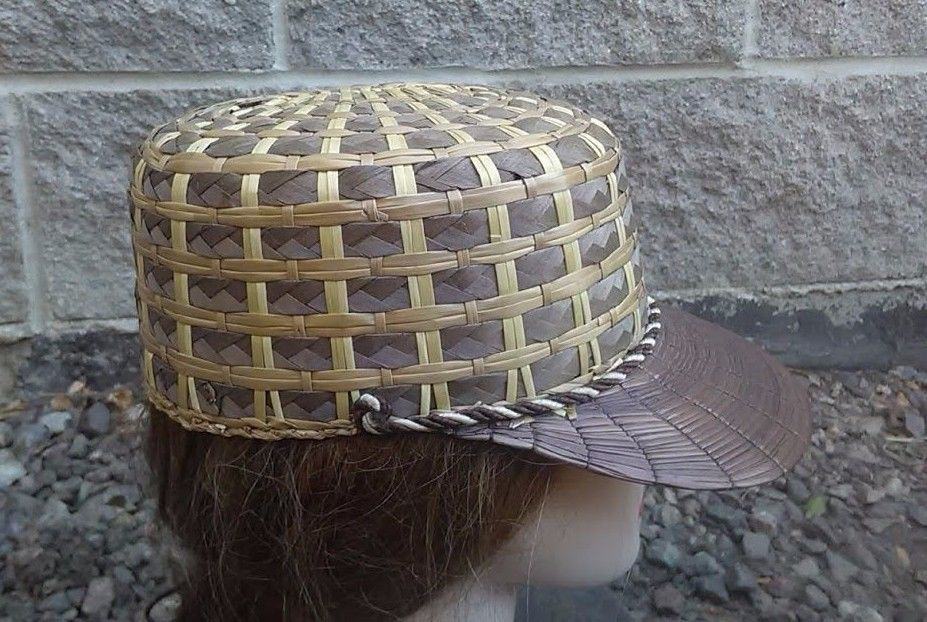 Yeddo hat woven with other materials, another side view Courtesy Ebay seller

Could the label “Genuine Yeddo” describe hats of these styles completely handmade of natural(plant) straw for export?

We have found one common characteristic with almost every complete “Genuine Yeddo” cap we have seen.  This feature does not appear on the boater styled tied hats. It appears on the cap styles.  On the caps, whether Italian or Swiss, whether completely knotted or plaited and knotted, there is a decorative cord at the base of the crown of the hat where it meets the brim.  Colors may change but there is always a curled end to the cord. The cording on the “Genuine Yeddo ” hats may only mimic the ribbon hatbands of the day on a smaller scale. 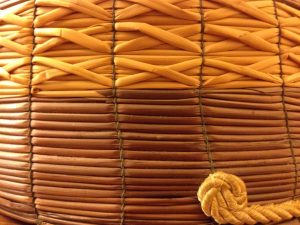 The Straw Shop  is aware of a few artisans keeping this method alive today are all Swiss: Otilla Leeman, Kurt Wismer, Geopf Kaufmann and Monika Schmead.  None of which produce hats as their profession.

Below is a present day hat made by Otilla Leeman,  Switzerland: 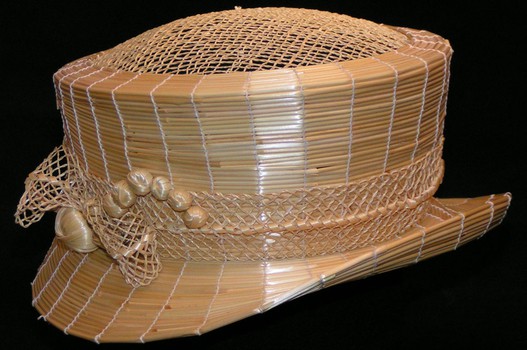 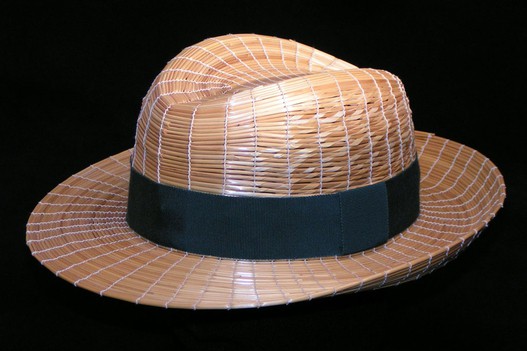 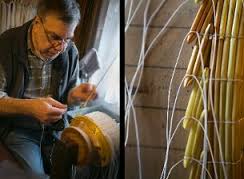 Mr. Kurt Wismer, Switzerland, left,  was the last tied straw hat professional, as of his retirement by 2019. When he was producing hats he’d spend a day to make one of these tied hats using waxed thread.  . He said it  took him up to 15 hours  to make a classic knotted hat.  The crown alone took two hours. For this he used locally grown wheat straw. The hats were made from whole straws.  More expensive models are made with rye straw. He’d cut, dry and sorts the raw material himself. 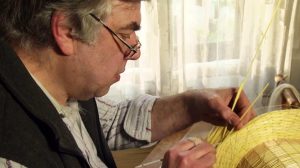 According to Mr. Wismer there are two types of straw hats.  Those that are stitched together (are called Bändelihut: The straws are flattened and sewn hats,  and those that are hand knotted (are called Röhrlihut. The straws remain intact and are tied together.) The knotted Röhrlihut hats were once exported as “Genuine Yeddo” (in English)  and could comprise of 2400 or more knots per hat.

Based upon our research, the boater style was produced by both the Swiss and the Italians hat makers. The cap styled hat appears to principally have been produced in Italy, followed by Japan.

The below stunning example is a Swiss Yeddo hat is courtesy of the Strohmuseum Im Park in Wohlen, Switzerland: 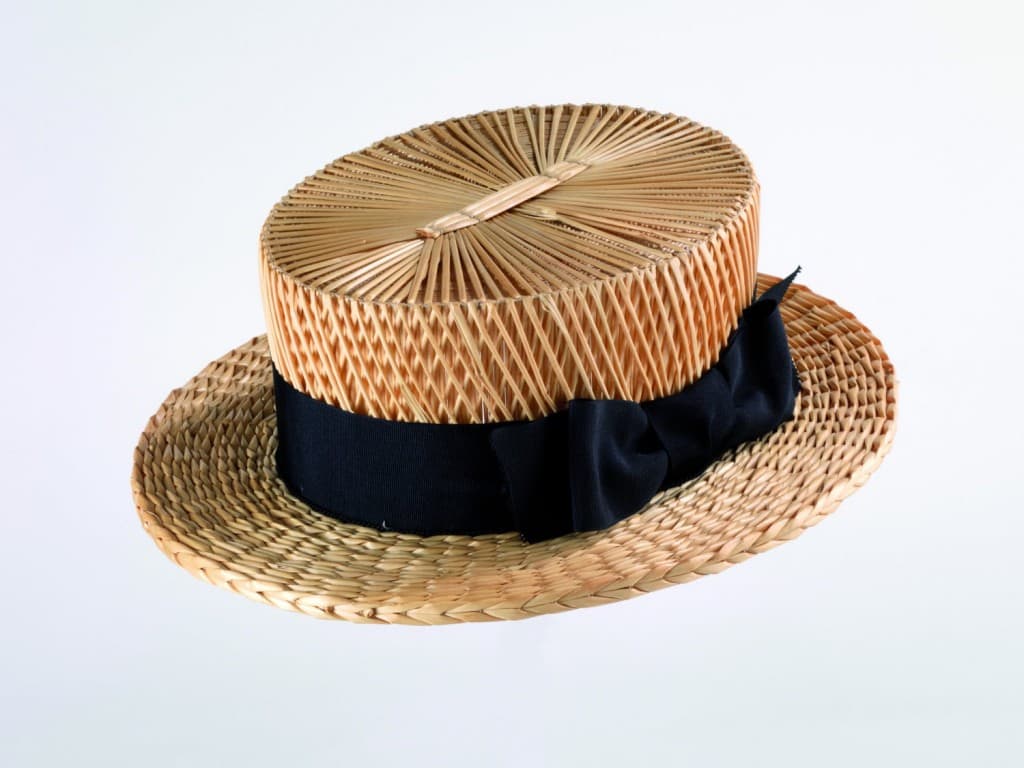 Beyond yeddo hats, there are other examples of knotted and tied hats The Straw Shop would like to present.

Here is an unusual example of a tied and knotted hat. Courtesy Museum of Fine Arts, Boston: 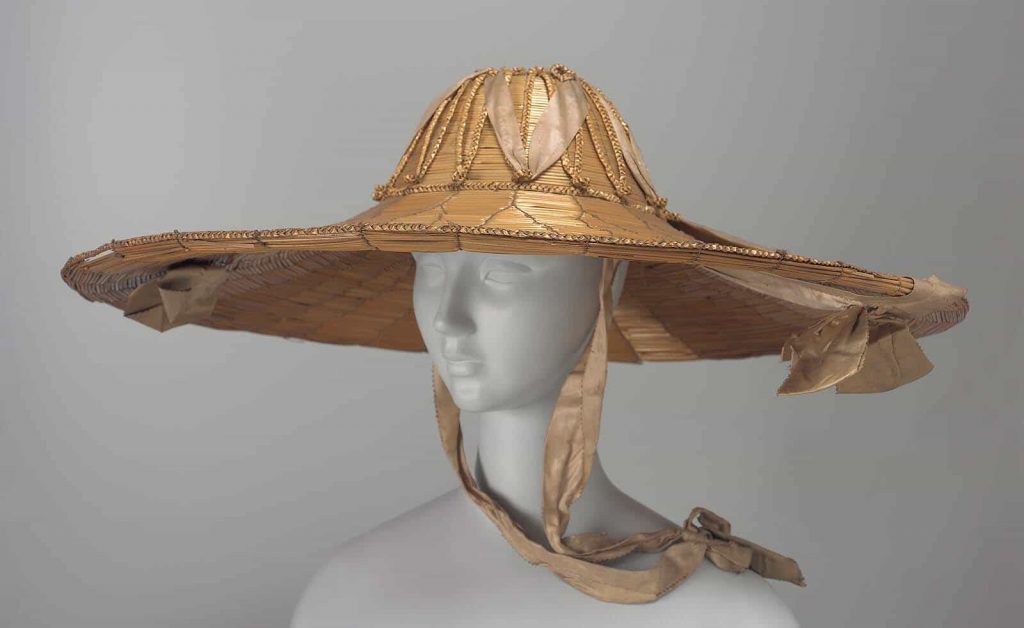 This yet another fine example from the The Elizabeth Day McCormick Collection,Courtesy Museum of Fine Arts Boston. 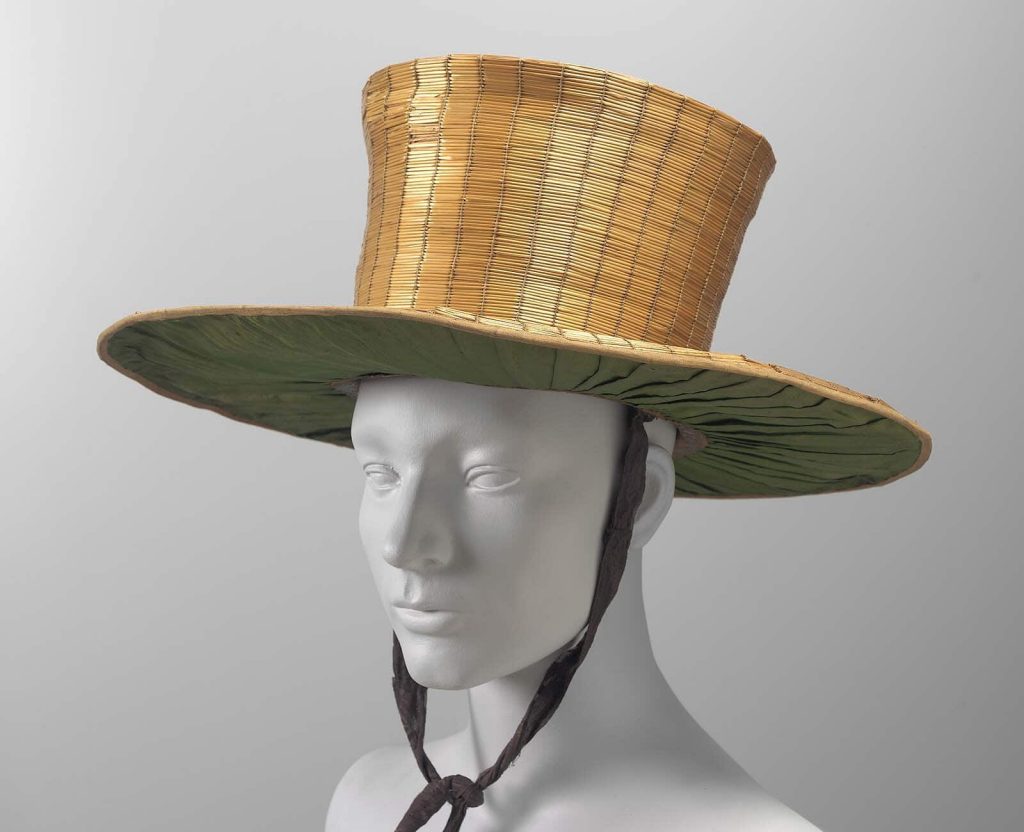 We are not certain about the origin this wonderful top hat, other than it is another example of knotted straw hat work. 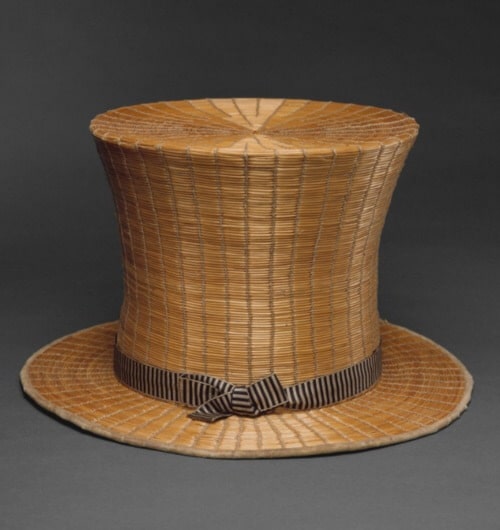 One last thing to say – Yeddo hats are not to be confused with Yedda.  Yedda is a plant material that is plaited or woven to make hats.

We believe this Yedda material may in fact be the material used on the Japanese Yeddo Hat shown below.  This hat has seen paint and is currently being restored.  Despite it’s condition The Straw Shop thought it an interesting Japanese produced hat to show you.

In summary,  Genuine Yeddo appears to be a name referring to hand knotted and tied natural straw hats made of either wheat or rye stalks, previously produced and exported by Switzerland and Italy and Japan.   Italy also exported Genuine Yeddo hats that included hand plaited styles with the familiar knotted brim. To date, we have not located a Swiss example of the cap style. None of the Genuine Yeddo hats are machine sewn in their construction. 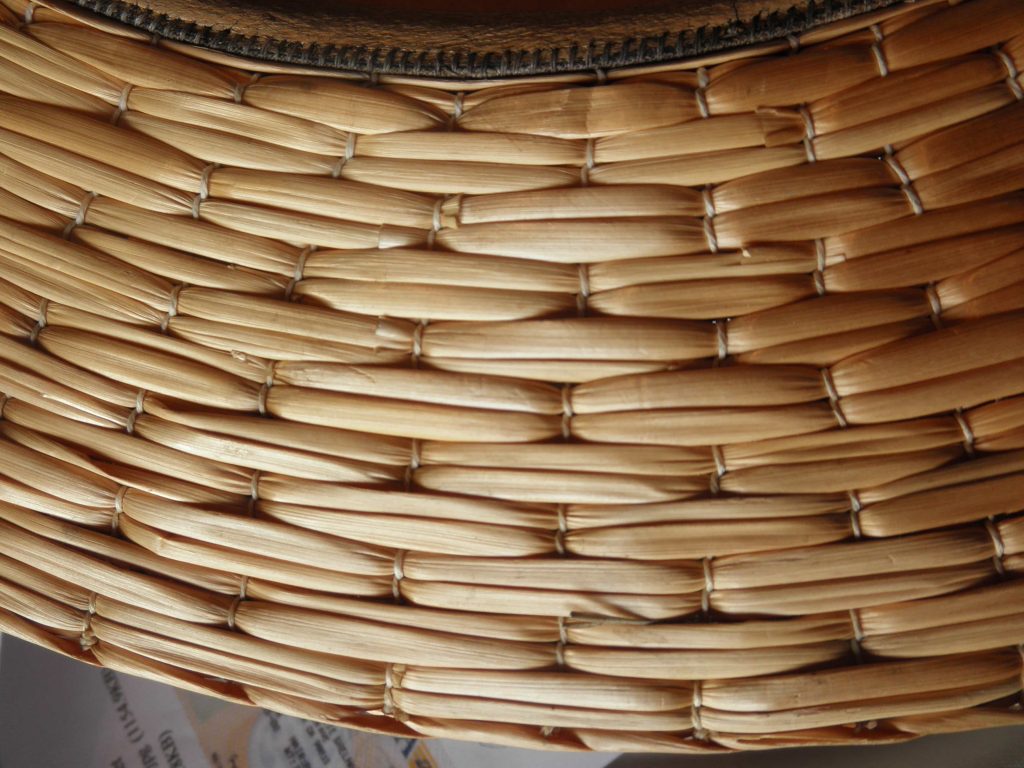 Co-authored by J.Huss and V. Main. Copyright The Straw Shop