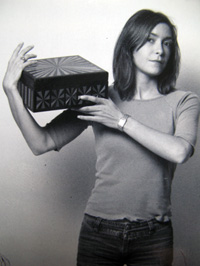 “I had to create something very small and even adapt the Tools to it,” she explains of her latest endeavor , a watch dial. “It  took me a long time to be able to execute the design in a perfect way using very thin [pieces of straw], which is a real difficulty.”

In 2010, Hermès recreated some of French designer Jean-Michel Frank’s most iconic furniture designs as part of its Hermès Maison home furnishing lines. It is through this recreation that Hermès got to know the work of Paul-Depasse. “Hermès was reediting furniture in straw marquetry,” she explains. “And so I sent them some pictures of dials that I had already made and the idea [for the Arceau Marqueterie de Paille] came about.”

“Working in making dials is completely different from the technique used for furniture.”